A lawyer proposes “part-time marriage” as a way to marry off thousands of divorced and unmarried women in Egypt. 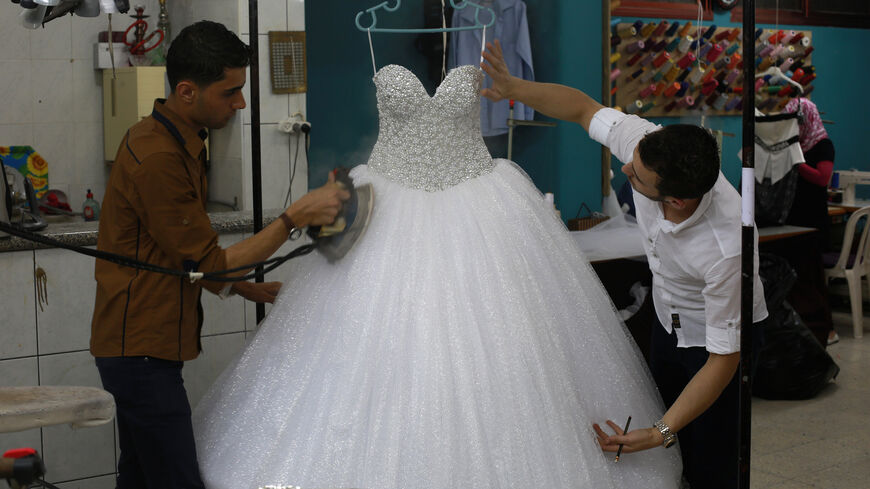 Palestinian designer from the al-Ashi family checks a wedding gown as it is being steamed at their atelier in Gaza City on June 3, 2013. - MOHAMMED ABED/AFP via Getty Images

Abeer Ahmed, 48, balked at a proposal by her neighbor to be a “part-time” wife to a wealthy husband to help her provide for her two young girls.

“After my husband’s sudden death six years ago, my neighbor told me about her rich relative who wants to marry me provided that he will only spend a few days with me every month in return for taking care of the expenses of my family. I rejected her proposal outright,” Ahmed, a housewife, told Al-Monitor.

“I told her that when I decide to get married again, I will look for a husband who will dedicate all his time for our family and raise our children with me.”

“Part-time marriage” has provoked a heated debate in Egypt in recent days after Egyptian lawyer Ahmed Mahran proposed it as a way to solve the problem of millions of divorced and unmarried women in Egypt and the Arab world.

Under his proposal, a husband could take a second wife on condition he does not permanently live with her. Instead, the husband could visit his new wife at her place for a few hours a week, while staying most of his time with his first wife.

Mahran, the manager of the Cairo Center for Legal and Political Studies, argues that his initiative mainly aims to find a solution to the plight of millions of divorced women in Egypt and the Arab world.

According to Egypt’s state statistics agency CAPMAS, there were around 218,000 divorces in 2020. A 2018 report by CAPMAS showed that there were 472,000 unmarried women and 687,000 unmarried men over the age of 35. The report blamed high marriage expenses and unemployment as main reasons for late marriages among this age category.

“Part-time marriage is not an invitation to debauchery,” Mahran said. “There are more than 2.5 million divorced women in Egyptian society, and millions of other cases in the Arab world, and putting forward the idea of part-time marriages aims to solve their problems through a legal marriage.”

The proposal has drawn fire in Egypt, with comments on social media websites decrying part-time marriages as invalid and running against Islamic teachings. But Mahran insists that his proposal has been approved by religious leaders. “When I approached a number of religious leaders for their opinion, they did not refuse, but rather stipulated acceptance and consent.”

Marriage in Islam is an open-ended contract and consent is a basic requirement to make it valid.

Montaser blamed the Islamic jurisprudence for the appearance of the part-time marriage proposal and similar ideas. “Where is the opinion of women regarding this issue? ... Still, this is not a problem [for them] since there is a male-dominated jurisprudence and an army of people who justify [these ideas],” he tweeted.

Hoda Badran, president of the Egyptian Feminist Union, criticized the media focus on the proposal, which she termed as “trivial.” “Marriage is a major responsibility in which the husband must pay his full attention to his wife and sons all the time,” Badran told Sada al-Balad TV. “If the husband is married to another woman, he will not be able to fulfil his responsibilities toward his family, so he has to be a ‘full-time’ husband.”

Enchad Alam El-Din, a professor of sociology at the University of Menoufia, said the idea of part-time marriage was not new in Egypt. “This kind of marriage has already been existent in many families. In these marriages, each partner organizes his affairs in a way that is suitable for his conditions and capabilities,” she told Al-Monitor by phone.

Alam El-Din said the part-time marriage is a form of polygamy, which is allowed under Islamic teachings. “In polygamous marriages, the man can take a second wife in a way that is suitable for his conditions and capabilities provided that this marriage does not violate the laws of the country,” she said.

Under Egyptian law, the husband must inform his wife of his second marriage and husbands who fail to report their second marriage to their wives face jail terms up to six months in prison and a fine of 200 pounds ($12.70).

A new draft law being debated by the Egyptian parliament calls for toughening penalties for failure to report the second marriage. The bill sets jail terms up to one year in prison and a fine of up to 50,000 pounds ($3,184).

Amna Nosseir, a professor of Islamic thought and philosophy at Al-Azhar University, said there is no problem with this type of marriage since there is acceptance and consent between the partners.

“But this will eventually harm the stability and harmony on which all marriages are built,” Nosseir told Al-Monitor. “Even if the second wife accepts to have her husband for just a short period of time, she will not be happy with this and problems and arguments will emerge either with the husband or the first wife,” she said.

Nosseir stressed that this type of part-time marriage will not solve the problems of divorced women, saying, “No wife loves to share her husband with anyone else and if we allow the marriages to be conducted this way, we will eventually undermine the stability of many homes.”