Debate on polygamy heats up in Egypt

Some Egyptian women strongly advocate polygamy, citing a large number of unmarried women, but others point out that a lack of men is not the problem and that a large percentage of second marriages end up in divorce. 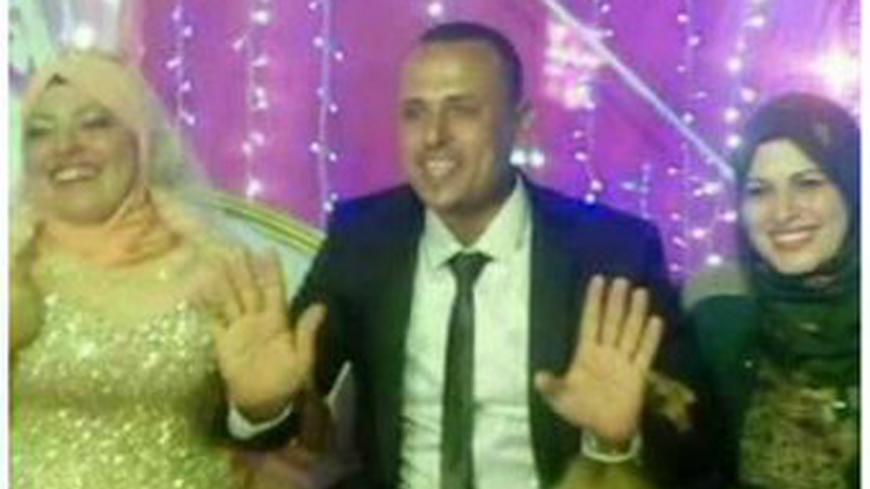 This photo of a groom's second marriage, where the first wife attended the wedding ceremony, went viral in Egypt. - Twitter

At 42, Amani had almost given up hope of finding a husband. Then she met Ali, an architect who is five years her senior. It was love at first sight and six months after their first encounter, they got married. Instead of the lavish wedding she had always dreamed of having, Amani settled for a small, quiet ceremony with only her mother and sisters attending. None of the couple’s friends were invited as Ali wished to keep the marriage a well-guarded secret. He feared his first wife and mother of his three children would find out that he was taking a second wife and cause a scene at the wedding. Amani acquiesced to his decision.

“I was totally blinded by love,” she told Al-Monitor. “Besides, I didn’t want to be a home-wrecker. If his first wife had learned we were getting married, she would probably have insisted on getting a divorce,” she said.

Today, two years later, Amani and Ali’s marriage is on the rocks. “When we first got married, we spent a lot of time together. He told his first wife that his job required him to travel for several days each week. But we’ve been quarreling a lot lately and I hardly see him anymore. He has even threatened to divorce me,” Amani said.

Their story is not uncommon in Egypt. According to a study by the National Center for Sociological and Criminological Research, 70% of second marriages end in divorce and 25% of Egyptian husbands remarry within the first three years of their first marriage. The statistics, dating back several years, are questionable given that the bulk of the second marriages are urfi marriages that are neither registered nor recognized by the government. Such informal marriages simply require the couple to sign a handwritten document (with or without witnesses) and are a way of getting around religious constraints on extramarital or premarital sex.

While accurate figures are hard to find, one thing is certain: The country is undergoing a marriage crisis, described by some as a ticking social time bomb. Not only are divorce rates alarmingly high (reaching more than 60% in cities in 2017, according to the national statistics agency) but the number of unmarried women is also soaring. In October, the figure hit 11 million — an estimated 50% of women of marriageable age.

The current circumstances have emboldened polygamy proponents, whose voices have grown louder in recent months. They justify the controversial practice on grounds that it gives women a “better chance of avoiding spinsterhood” and makes it easier for them to “exercise their right to have a husband.” They also argue that having more than one wife allows men a “sensible way to assuage male sexual frustration, a common cause of divorce.”

Pro-polygamy campaigner Rania Hashem, who has written the book "Polygamy: A Religious Right," says, “Women have no right to object to their husbands’ taking multiple wives as they cannot forbid what God has sanctioned in the Quran.”

Hashem appears frequently on television and organizes seminars that advocate polygamy. “By acquiescing in your husband’s decision to take other wives, you are in fact abiding by the rules of Islam,” she tells women. Basing her argument on what she calls “the sex-ratio imbalance,” she says there are millions of women who are unmarried because of the shortage in men in Egypt. “Polygamy is key to resolving this and other social problems.”

However, many say that no such imbalance exists, and that the high rates of unmarried women cannot be blamed on the lack of men.

Women’s rights advocates believe other factors such as social and economic conditions are behind the phenomenon of unmarried women. Iman Bibars, CEO of the Association for the Development and Enhancement of Women, told Al-Monitor, “Young men that are at an early stage of their careers very often cannot afford the exorbitant costs of marriage, which include buying a home and furnishing it, the bride price, etc. The demands made by the bride’s family — even in poor families — are often high, rendering it almost impossible for the average young man to fulfill those demands. Usually, it’s older men who are already well-established who can afford to pay for all those things. Most of them are already married but are seeking younger brides.”

Mona Abu Shanab, a TV producer and another polygamy advocate, has tried to win converts to her cause from across the Arab world. She recently launched a verbal attack on Tunisia for what she called its “colonialist family laws” outlawing polygamy.

“There are millions of unmarried women, widows and divorcees in Tunisia, where do they all go?” she said in a viral video posted on her Facebook page in October. Abu Shanab called on God-fearing Tunisians to reject the country’s anti-polygamy law, which, she said, “encourages men to commit adultery.”

The Quran states that men are allowed to marry up to four wives at a time, provided that the husband can treat all four equally. It adds that if the husband feels he might not be able to treat all with equal fairness, then to marry only one.

Unlike in Tunisia, polygamy is permissible in predominantly Muslim Egypt, where men can marry up to four women at a time. There have been some small but relatively feeble attempts to curb the practice, however. A law passed in 1985 requires the husband to seek the consent of his first wife (or wives) before he takes another bride. If the first wife objects or asks for a divorce, she has to provide evidence in court that his taking another wife has caused her harm. This right is not open-ended: The wife has one year to file for divorce starting from the date on which she becomes aware of her husband’s plan to marry another woman. Judges, however, often refuse to apply this provision, considering it to run counter to Sharia (the main source of legislation, according to Article 2 of the constitution). Six years before the issuance of this law, a less-restrictive provision had been decreed by President Anwar Sadat, which had relieved the first wife of the burden of having to prove the polygamous marriage was harming her. According to the 1979 provision, a woman could get divorced simply if she objected to an additional wife. The law was overwritten after it met with stiff resistance from conservative Muslim clerics who argued that polygamy is a religiously legitimate right.

In recent months, social media activists have been calling for a revival of the 1979 law. They say that the condition of the wife’s consent should be added to the marriage contract.

Hibaaq Osman, CEO of the Cairo-based nongovernmental organization Karama, which works to empower women and young people in the Middle East and North African region, told Al-Monitor that what is important is to enforce the existing law (under which the wife’s consent is already required). Directing a message to polygamy advocates, she asked, “Are you yourselves married? And if you are, would you still think it is fine to share your husband with other women? I really doubt it.”

Osman may be skeptical, but there are many women who believe that complying with their husbands’ wishes is a religious duty.

In October, photos of an Egyptian wife attending her husband’s wedding ceremony went viral on social media, raising eyebrows and prompting debate on the contentious issue of polygamy. Opponents said it was “unfair” and “selfish” of the groom, while advocates of polygamy insisted it was “legal” and “religious.” Mo’taz Hilal, the groom in question, published a statement on his Facebook page, explaining his motives for taking a second wife. “I have always wanted a large family and wished to have more children,” he wrote.

“While my first wife was upset at first when I told her I was getting married, she seems to have warmed up to the idea," he said. "She even helped coax my new bride’s parents into accepting the marriage.”