The Israeli Cabinet has created a plan to strictly enforce an anti-polygamy law from 1977, but why now? 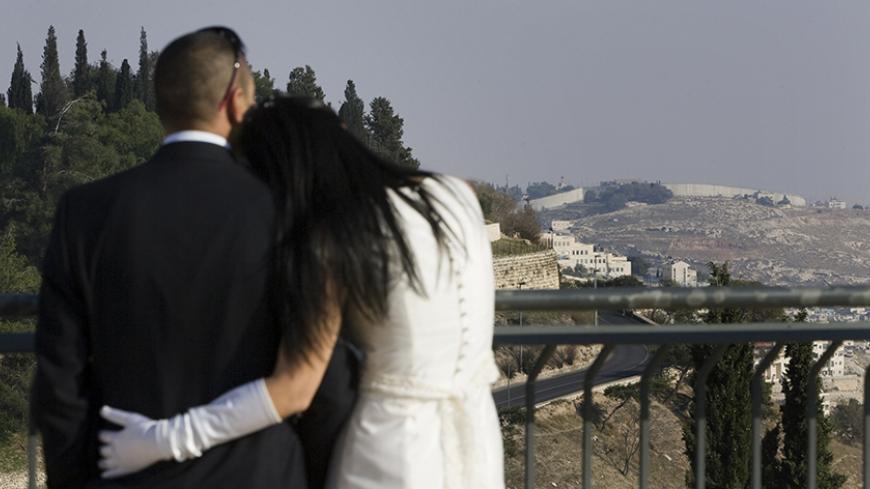 An Arab-Israeli couple takes in a view that includes Israel's controversial separation wall (top R) during the photo shoot before their wedding in Jerusalem, Israel, Nov. 26, 2009. - JONATHAN NACKSTRAND/AFP/Getty Images

GAZA CITY, Gaza Strip — The Israeli Cabinet has a plan to fight polygamy among Arab-Israelis. The anti-polygamy plan, approved Jan. 29, calls for stricter enforcement of Article 176 of the 1977 Israeli Penal Code, which prohibits polygamy and makes it punishable with five years in prison.

Judicial and law enforcement authorities are urged to report any suspected cases of polygamy. The plan also calls for stricter accountability and punishments for government employees who fail to report such cases as they encounter them. Religious courts will also be subject to these new regulations. According to the plan, men with multiple wives may face legal prosecution or lose welfare allocations.

Many analysts believe that this step aims to fight Arab demographic growth inside Israel, where Arab-Israelis have reached 1.5 million people, representing 22% of the total population of Israel, according to the Israeli Central Bureau of Statistics at the end of 2016.

Naila Awad, director of the Association of Women Against Violence, told Al-Monitor, “The anti-polygamy law was enacted in the 1970s but there is no systematic way to monitor its implementation, [and that] the Islamic Sharia, espoused by the majority of Arabs [in Israel], allows polygamy.”

She added, “Men who are married to several women do not register their [serial] marriages in the Israeli Interior Ministry. The subsequent marriage is done in secret, without the knowledge of the Israeli authorities. The second wife is referred to as ‘the girlfriend,’ and there is no tangible record of the marriage. The children of this marriage are often registered under the name of the first wife to benefit from welfare allocations. In this context, the new Israeli plan will strengthen the monitoring of the marriage registration processes.”

Although her organization is against polygamy, Awad stressed that it refused to support the anti-polygamy plan proposed by Israeli Minister of Justice Ayelet Shaked, who is known for her racist positions against Arab-Israelis. Awad doubts that Shaked’s intention with this plan is to protect women’s rights, as it does not include any verbiage to protect them or their children against possible societal repercussions, should their husbands be punished for practicing polygamy.

Awad noted that the plan is actually detrimental to the rights of children and women, as they would be deprived of welfare funds and also financial support in the case of divorce, which would increase poverty rates among Arabs in Israel that already stand at about 53%, according to 2016 statistics by the National Insurance Institute of Israel. Awad said the plan is ill-conceived.

She believes that before following through with the anti-polygamy plan, the government ought to provide support for women by offering vocational training and helping them to get jobs to support their children and give them a decent life. Awad stressed at the same time the need to punish the husbands who commit polygamy.

“The plan must be comprehensive, with the cooperation of all women’s organizations so as to ensure the protection of women‘s rights and status,” Awad said.

Awad added that the plan would further marginalize Arabs. She believes that the plan intentionally coincides with the demolition of houses in the Negev, where polygamy is widespread.

According to Awad, there are several identifiable reasons for the high polygamy rates, which stand at 36% in Negev. There, more Arab girls are dropping out of school, prevented from attending by the distance between their homes and schools, lack of transportation and infrastructure. She said that polygamy is also widespread in other areas. Because there are no official figures on them, her organization is currently carrying out a survey on polygamy among Arab-Israelis outside the Negev.

Elian al-Hindi, an independent political analyst specializing in Jerusalem affairs, told Al-Monitor, “The current plan to fight polygamy aims to exploit the law to undermine the Arab population and reduce the number of Arabs in Israel.” He added that the plan does not offer protection to the wives and children, aiming only to limit Arabs’ public and private freedoms and push them to emigrate.

Hindi said this plan is an attempt to enforce the anti-polygamy article of the 1977 Penal Code. However, he noted that enforcing it would be difficult as Islam allows polygamy, perhaps leading to a wave of protests. He believes the Israeli government does not have the resources needed to follow through with this plan, particularly since neglect to enforce the law from the start contributed to a rise in polygamy. He noted that 70,000 to 80,000 Bedouin in the Negev have multiple wives, and it would be impossible to retroactively convict and punish all of them.

“Israel would not be willing to engage in a conflict with a large Bedouin population over polygamy, knowing that some of them serve in the army,” Hindi said.

Meanwhile, director of the Jerusalem Center for Social and Economic Rights Ziad Hammouri told Al-Monitor that the Israeli government seeks to fight the Arab demographic growth in Israel.

Hammouri stressed that the Israeli plan will not stop Arabs from multiplying, but rather encourage them to have as many children as possible.