Arab residents of the Negev in southern Israel are bypassing the Israeli law that prohibits polygamy through a practice known as a “cohabitation marriage” that is registered outside the Sharia courts. 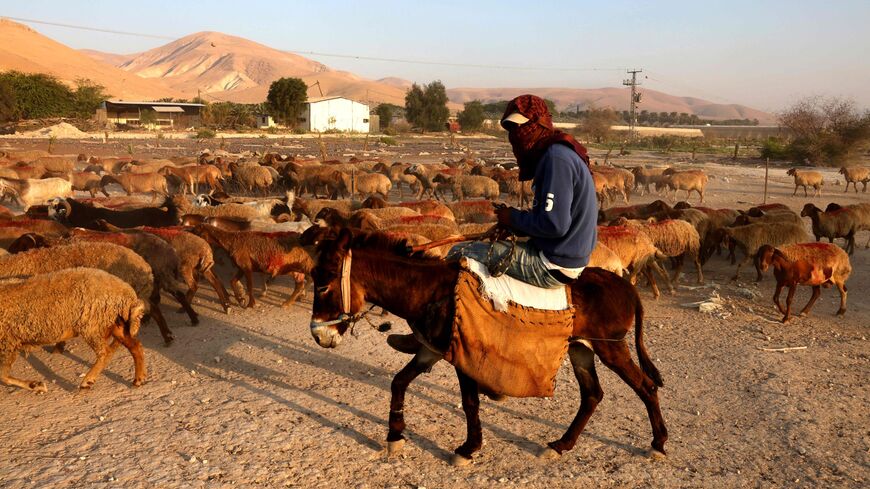 Bedouin shepherds herd a flock of sheep near the Palestinian village of Fasayil in the Jordan Valley, in the occupied West Bank near the border with Jordan, on July 15, 2021. - MENAHEM KAHANA/AFP via Getty Images

To circumvent the Israeli law that prohibits polygamy, Odeh, 57, from the village of Lakiya, north of Beersheba in the northern Negev, got himself a second wife through the so-called cohabitation marriage. The marriage-like relationship is concluded under a document ratified by a lawyer without registering a marriage contract in the Sharia courts.

Odeh, a member of the Bedouin tribe who refused to reveal his full name for fear of legal repercussions, told Al-Monitor, “I opted for this type of unofficial marriage to keep my first wife from losing Israeli National Insurance benefits. I wanted a second spouse to expand my family. Our tribe values big families and polygamy, even if in some cases having a second wife without the consent of the first one would cause various family problems that may culminate in divorce.”

His first wife opposed his new relationship at first, but eventually accepted it to avoid getting a divorce. And should the second spouse report the new marriage to judicial authorities, the husband could face arrest for polygamy, and she would struggle to support her children and provide for their needs alone.

The NII does not obligate the man to pay alimony to the wife married through cohabitation in the event of divorce. He would, however, be bound to pay child support.

Odeh argued that Israeli authorities want to curtail polygamy to reduce Bedouin birth rates and tip the demographic balance in favor of Jews.

Recently, the so-called cohabitation marriage has spread among Bedouins in the Negev, allowing a complete marital relationship without any official papers. The man and women would live in one house and meet at specific times, with the right to return to their pre-marriage family house. The couple would often agree not to have children. Proponents justify it as a legitimate practice, similar to legal marriage.

On May 27, 2019, the Israeli Knesset approved an amendment to the Citizenship Law banning multiple marriages among Arab Israelis, whereby the additional wives would not be registered in the population registry.

But Israeli police and public prosecutors admit that they have been unable to enforce the law. According to a July 2021 report by Haaretz newspaper, representatives of the police and the prosecution said that polygamous men have been circumventing the law in various ways, such as registering their second marriage as cohabitation and fabricating a fictive divorce.

According to the Haaretz report, the Public Prosecution has served indictments to only around 4.5% of polygamous men since 2018.

Academic reports from 2018 indicated that the percentage of cohabitation marriage among the Bedouin Arabs in the Negev ranged between 20% and 40%, and that 75% of polygamous men married only one other woman. Israeli Arabs do not register their marriages at the official Israeli registries.

The Demography Sector at the Israeli Central Bureau of Statistics counted 6,680 polygamous men in southern Israel, where most Bedouins live, with 834 new ones added between 2017 and 2019.

Safaa Shehadeh, a Nazareth-based political and social activist who works for the Women for Life Association, told Al-Monitor, “Polygamy is unfortunately a widespread phenomenon in the southern regions in the cities and villages of the Negev. The Israeli law recognizes only one wife. But if the husband decides to engage in (cohabitation), the Israeli authorities would have to recognize these women as legal wives and will impose penalties against the husband for violating the Israeli law banning polygamy.”

She added, “Meanwhile, Israel’s NII treats polygamous families as one extended family to avoid paying benefits to each person and child within the family separately. This is aimed to cut expenses and alleviate the burdens on the state.”

The biggest problem is when the wife holds a green identity card, meaning that she was living in the Palestinian territories. “In this case, the Israeli authorities do not recognize her, whether she was a first, second or even third wife, and she is not granted temporary residence," Shehadeh said. "She may even be expelled into the Palestinian Authority areas.”

Polygamy in the Negev stems from Bedouin customs, Shehadeh said, but “this phenomenon, however, is sometimes linked to violence against women. Some women find themselves forced to accept a second wife and even bear insults and psychological and physical violence in order to stay with their children.”

Hanan al-Asam, an activist from Beersheba, told Al-Monitor that polygamy is commonplace in Negev tribal society in the Negev because "these tribes want to grow in number and they often perceive polygamy as a source of pride for men.”

Asam added, “This type of marriage aims to deceive the NII to pay the benefit allowances to these extended families. The main reason for resorting to this marriage is to bypass the Israeli law prohibiting polygamy, which imposes an imprisonment sentence and a fine.”