The news of Mr. Olympia, otherwise known as Big Ramy, marrying for the second time without the knowledge of his first wife sparked controversy in Egypt, especially in the wake of statements whereby an Islamic preacher denied a woman’s right to ask for divorce when her husband marries another. 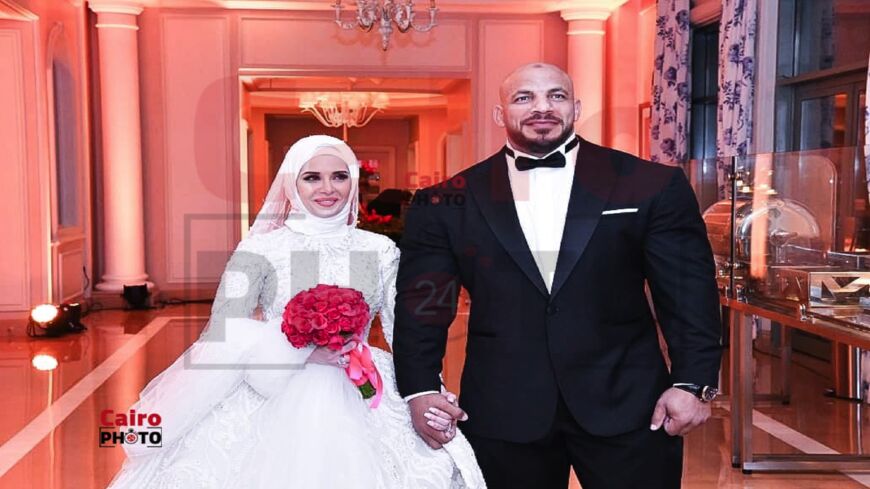 CAIRO — Egyptian bodybuilding champion Mamdouh al-Subaie, also known as Big Ramy and winner of the Mr. Olympia 2021 championship, topped search engines over the past few days following the announcement of his second marriage.

Activists on social media circulated on Nov. 19 photos of the bodybuilder’s second wedding. While some supported the marriage on the grounds that a man has the right to marry another woman, others opposed it on the grounds that his first wife only learned of the news through the press.

In conjunction with the controversy over Big Ramy’s second marriage, media and human rights activists launched an attack on the professor of Sharia at Al-Azhar University in Cairo, Mabrouk Attia, over his televised statements made two years ago but only now circulated in the wake of Big Ramy’s marriage. In the statements, Attia said that a woman has no right to ask for divorce if her husband marries another woman, and if the first wife asks for divorce for this reason, her punishment shall be Hell on the Day of Resurrection.

He added that a man is permitted in Islam to marry a second, third and fourth wife, and there is nothing wrong with that in Sharia as long as he is able to provide for them. He said that the first wife only has the right to ask for divorce in the event that her husband beats her or fails to provide for her, but should the first wife find herself harmed by the second marriage, what she can ask for is khula, not divorce.

Most of the reactions voiced on social networking sites in Egypt rejected this opinion on the grounds that a woman has the right to ask for divorce because of the psychological harm a second marriage inflicts upon her.

In response to Attia, president of Egypt’s National Council for Women Maya Morsi said on her Facebook page on Nov. 22 that “Mabrouk Attia’s statements do not concern us,” adding that Al-Azhar Sheikh Ahmed al-Tayeb had previously said that polygamy is a restricted right that must be justified. Tayeb also said that the danger of being just to all wives prevents a Muslim from marrying several wives, according to the text of the Noble Quran in Surah An-Nisa, which states, "But if you fear that you will not be just, then marry only one."

Amna Nasir, a professor of faith at Al-Azhar University in Cairo, told Al-Monitor, "In Islamic law, nothing prevents a woman from asking for a divorce for any reason. A woman shall be at liberty not to bear the situation and ask for a reasonable separation without being deemed as a sinner for doing so.”

She said a wife is entitled to be informed of her husband’s desire to marry another woman, and this is a way of being just to the two wives as stipulated in the Holy Quran.

“How will this justice be achieved in the presence of an undeclared marriage?” she emphasized.

Grand Mufti of the Republic Shawki Allam said during a TV interview 10 months ago on Sada El-Balad TV that polygamy must be strongly justified and a man must be just to all wives. He stressed, however, that monogamy remains the norm.

Meanwhile, professor of comparative jurisprudence at Al-Azhar University Ahmed Karima told Al-Mehwar TV over the phone on Nov. 24 that the Hanbali school of thought (one of the four schools of Islam) permitted a woman to stipulate in her marriage contract that her husband not marry another.

He said whoever says that polygamy is from the Sunnah is a liar, but it is permissible if justified and is only ethical for the husband to be transparent, frank and credible with his wife.

Izza Kamel, a journalist and director of the independent Appropriate Communication Techniques for Development Center, told Al-Monitor that Mabrouk’s statements are destructive and reflect a patriarchal mentality that has nothing to do with religion. She said that Egyptian law obliges a man to inform his first wife of his marriage to another.

A wife shall be at liberty to ask for divorce for any reason and not just because her husband wants to marry another, she added.

“Why would a man have alone the right to divorce and a woman be deprived of this right?” she asked rhetorically.

Kamel said that this type of religious opinion deepens the rift between a man and a woman and boils down the rights of a wife affected by her husband’s second marriage to the khula, which is unfair and causes a woman to lose some of her financial rights in return for separation.

Lawyer and director of the independent Women's Center for Guidance and Legal Awareness Reda el-Danbouki told Al-Monitor, “The divorce system in Egypt is based on discrimination and comes in violation of Article 53 of the Egyptian Constitution and the international conventions that Egypt signed and ratified regarding discrimination. As far as divorce is concerned, women are discriminated against, as Egyptian men have the right to unconditional or justified divorce and do not need to enter courtrooms to obtain a divorce.”

“As for the women, they must resort to the family court and prove that they were harmed in order to obtain a divorce. Otherwise, they would be forced to resort to khula and consequently give up their financial rights to their husband in exchange for separation,” which Danbouki considered blatant aggression against women’s rights.

He said if a husband is to marry another woman, he is legally obligated to notify his first wife either through court or an authorized person in accordance with the text of Article 11 bis of Law No. 25 of 1929 as amended by Law No. 100 of 1985. According to this law, Danbouki said, a husband must state his marital status in the marriage document and, if married, must add the name of his wife(s) along with their places of residence, and the authorized person shall notify them of the new marriage. The wife, according to this law, has the right to ask for divorce on the grounds of the physical or moral damage inflicted upon her.