Egypt is seeking to curtail customary marriages of girls under the age of 18 after President Abdel Fattah al-Sisi called for measures to combat this phenomenon amid opposition by some religious scholars. 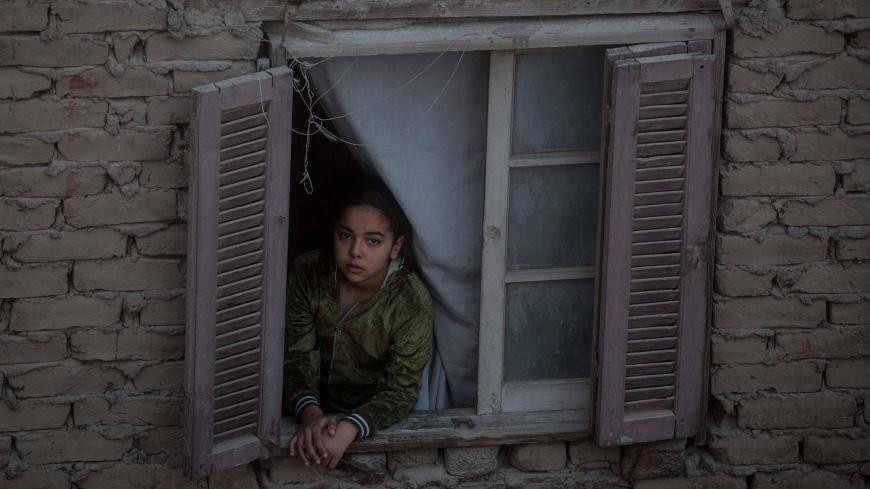 A young girl looks out of a window in a building inside the famous "City of the Dead" neighborhood in Cairo, Egypt, Dec. 15, 2016. - Chris McGrath/Getty Images

CAIRO — Egypt’s National Council for Women launched its campaign No to Underage Marriage on Oct. 15, in cooperation with the Ministry of Religious Endowments and Christian clerics. The campaign’s main objective is to curtail undocumented marriages of minors.

The campaign follows calls by Egyptian President Abdel Fattah al-Sisi Sept. 30 to impose measures against customary marriage of underage girls. “I was surprised that the number of married 12-year-olds was not low,” Sisi said during a ceremony marking the population census that took place in April.

Sisi wondered how these young girls can assume the responsibility of marriage and a household. “This is something that pains me and pains anyone with a real conscience who cares for their sons and daughters,” he said.

The phenomenon of customary marriage is common in Egypt, especially for minors in rural areas. Officials authorized by the Ministry of Religious Endowments draft customary marriage certificates for girls under the age of 18 without officially registering the marriage at the state registries, as the Egyptian Child Law bans marriage for girls under 18. When the girl reaches 18, the husband would register the marriage at the Ministry of Justice. This practice affects population growth, which has hit unprecedented levels. According to the April census, Egypt’s population has reached 104.2 million, including those living and working abroad, a rise of some 22 million in just 10 years.

On Oct. 2, the Ministry of Religious Endownments suspended Faraj Mostafa, an imam at a mosque in Gharbia governorate, banning him from ascending the pulpit and referring him to the ministry’s disciplinary committee. He is accused of officiating 27 customary marriages of underage girls.

On Oct. 9, the Ministry of Health reported that 500,000 children are born every year to adolescent mothers.

Customary marriage in Egypt does not only affect girls. Women, widows and divorcees are also married this way through offices set up specifically to introduce them to potential husbands.

Amira Hassan, the manager of Al-Hayat Company for Social Harmony, a matchmaking company, said this type of marriage is very common due to the prevailing social conditions and the requirements of an official marriage, such as paying an officiant, the Ministry of Religious Endowments and the relevant state authorities, namely the Ministry of Justice, as well as paying expenses related to supporting the wife. “Unofficial marriage contracts only require the consent of both parties, without adding other conditions,” she said.

“This type of marriage is very popular [in Egypt] as it curbs climaxing spinsterhood,” Hassan said. “Customary marriage allows for childbirth [children are registered in the personal status registers as legitimate children] and courts have recently started recognizing it. There is not a single law prohibiting it.”

CAPMAS statistics issued March 13 indicated that some 13.5 million people in Egypt over 30 are single, including 2.5 million men and 11 million women.

The Administrative Court of the State Council ruled April 23 that a woman could register her child in the civil status registry based on a customary marriage. It said that such a marriage certificate alone was sufficient as a basis for issuing a birth certificate to a child born within such a marriage, in which the child should be registered under the name of the husband. This was seen as a victory for people in customary marriages, especially as there is no law banning the practice — something that the state is now working to change.

“Egypt’s personal status law does not criminalize customary marriages of underage girls. All it does is prevent registration of a marriage for girls under 18, in terms of documentation, without [expressly] banning the marriage of girls under 18,” Abdel Fattah Yahya, a lawyer at the Center for Egyptian Women’s Legal Assistance, said Sept. 20 during the TV show “Set Elhosn.”

Yahya added, “There is no clear provision [in the personal status law] banning girls’ marriage under that age. This law confers to these girls no rights other than the right to divorce and obtain proof of paternity … but as far as alimony or spousal support and any other rights are concerned, they have none.”

Mohammad Samir, a spokesman for the Administrative Prosecution Authority, told reporter Azzah Mustafa in a telephone call during Sada Elbalad's “Newsroom” TV show that there were no texts in the law against customary marriage.

As for efforts to address the spreading phenomenon, Egyptian Minister of Health and Population Ahmed Emad el-Din said Oct. 12 that the National Population Council was in the process of preparing a bill to outlaw child marriage, in cooperation with the Ministry of Justice, the Public Prosecution and the National Council for Women.

Mohamed El Shahat al-Gundi, a member of the Islamic Research Academy, told Al-Monitor that customary marriage is permitted in Islam as long as the following conditions are met: a public announcement, the presence of witnesses and consent of the legal guardian. “Islamic law does not set a specific [minimum] age for marriage,” he said.

Gundi added, “Outlawing customary marriage or raising the age of marriage for female minors to address population growth could have adverse effects. This measure could promote secret and illegitimate relationships between men and women, which is against the teachings of the Islamic faith.”