Underage marriages are still widespread in some parts of Egypt as the judicial system has failed to prevent marriage officiants from taking bribes to perform illegal unions. 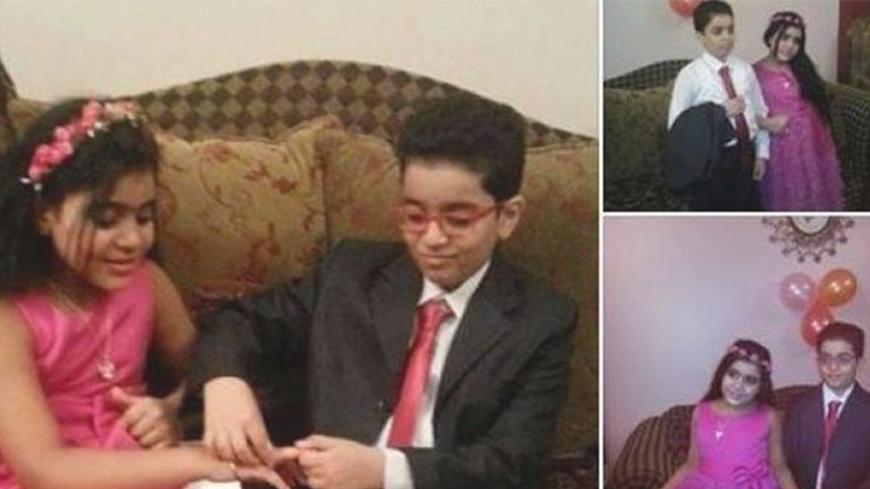 The parents of 5- and 8-year-old cousins whose engagement was announced on Facebook will be examined by the Minister of Population Hala Youssef, July 24, 2015. - THE CAIRO POST

CAIRO — Eid Albanna, an Egyptian from South Sinai, posted a photo of the engagement ceremony of his daughter Salma, 5, to her cousin Youssef, 8, on Facebook July 21. He did not expect the wave of criticism that ensued, nor was he prepared for the controversy over underage marriage the photo sparked in Egypt.

On July 23, Albanna expressed his opinion to El Watan newspaper about the criticism leveled against him because of the photo, which, according to him, is tradition in Egypt. Salma’s brother, Ahmed Albanna, told Youm7, “The issue is not worth all the hype. The parents have said that Youssef is Salma’s, and such a thing happens a lot in Egyptian families.”

Albanna was criticized by Facebook-based activists, the National Council for Childhood and Motherhood and by children's rights activists like lawyer Mahmoud Badawy, who described the engagement as a violation against children’s rights and the result of a lack of awareness. Some activists mocked the engagement and the families of the two children on Facebook.

As the criticism grew harsher, Albanna had to delete the photo. He wrote on Facebook that the engagement was merely a joke between him, his sons, relatives and friends.

On July 23, the National Council for Childhood and Motherhood filed a complaint with the Interior Ministry against the children’s parents in an effort to block the engagement and marriage until both parties reach legal age. The council also set up a hotline for Egyptians to report these marriages.

Though Salma and Youssef’s engagement may have been a joke, underage marriages are all too real. In rural Upper Egypt and some border and remote governorates, traditions are strong. M.R., a man from Matrouh governorate, told Al-Monitor that in most cases, marriages in the governorate are performed within the families or tribes, and from the day she is born, every girl is destined to marry one of her relatives once she attains puberty. He added that there is nothing wrong with this practice, saying, “Marriages can take place at the age of 14 for girls and 16 and above for boys, as [people of Upper Egypt] prefer early marriages for girls.”

O.A., an engineer from the Qena governorate in Upper Egypt, told Al-Monitor that he rejects the idea of underage marriages. He said that although they are no longer common in the centers of the Upper Egypt governorates, they are still widespread in the villages and hamlets of Upper Egypt, as awareness and education levels there are low.

M.A., a lawyer from the South Sinai governorate, told Al-Monitor that people’s acceptance or rejection of early marriages is not correlated with one’s education level and that they are a matter of personal freedom. He said, “I have completed my university studies, and I do not reject early marriages. Many early marriages succeed and some fail, just as marriages at an older age. Early marriages are not harmful to the future of the girls, and most of the girls here see themselves married in the future, rather than educated or involved in the labor market. Early marriages do not necessarily mean that girls were forced to do it, for their consent is a must.”

N.Z., a housewife from the Qena governorate, told Al-Monitor that she married her cousin at the age of 15 and had been engaged to him since the age of 10. She added that she is living a happy life and has no problems with her husband.

The amended Child Law No. 126 of 2008 prohibits marriages for people under the age of 18. Previously the legal marriage age in Egypt had been 16.

M.A. said that the only supervisory authority overseeing marriage officiants in Egypt is the marriage registry, which is responsible for checking the authenticity of the parties’ documents. Yet with the growing population and busy registry offices, it has become difficult for officials to check the authenticity of all marriage documents. Also, because many residents of certain areas have no official documents, marriage officiation regulations have given the Nuba people, as well as those of the New Valley governorate, the Red Sea governorate, the Matrouh governorate and Sinai, the right to submit a certificate in which two of the parties’ relatives attest to their age, provided that this certificate is certified by the mayor or his deputy.

M.A. pointed out that this clause lends itself to tampering by the relatives in collusion with local mayors. He noted that there are many underage marriages made by "customary" marriage contracts and "marriage validation" contracts. Customary contracts did not previously result in the recognition of any civil rights, such as the right to obtain a family registry or to register children, nor were resulting children entitled to health care and education. Marriage validation contracts bestow at least the right to register children for their health care and education rights. He added that the situation has changed when a court ruling in April 2015 found customary marriage contracts were sufficient proof for birth registration and other rights. Although M.A. supports the court decision, he said he expects the number of underage marriages to increase, as the fear of children being denied birth certificates and health services including vaccinations had for some been a deterrent to avoid underage marriages.

An article in El Watan reported that marriages performed through marriage validation contracts, which are often used in underage marriages, reached 40% of marriages in Egypt, although a CNN report did not include Egypt among the top 10 countries in underage marriage. It should be noted that the minimum age for marriage varies from one country to another, and that Spain, for instance, raised the minimum age for marriage from 14 to 16 years in July 2015.

Underage marriage is widespread in some areas, but the failure of Egypt’s legislative system “has hindered the response to this tradition and its subsequent disadvantages,” Azzat Al-Ashmawi, former secretary-general of the National Council for Childhood and Motherhood, told Al-Monitor.