Demands for tougher penalties against child marriage grow in Egypt

As child marriage spreads in Egypt, many observers and parliamentarians call for tougher penalties for anyone involved, while some believe that toughening penalties will not be a solution because there are many ways to circumvent laws. 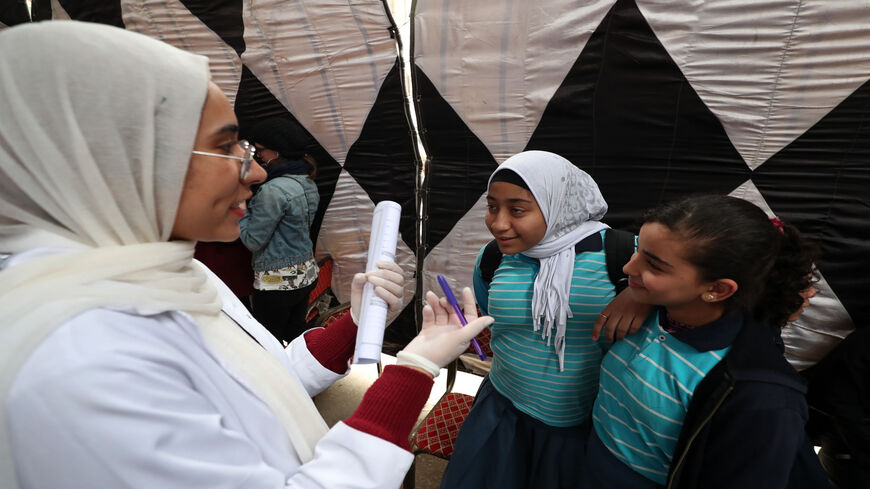 An Egyptian doctor gives medical advice to girls about female genital mutilation during an awareness campaign in Giza, on the outskirts of Cairo, Egypt, Feb. 18, 2020. - Mohamed el-Shahed/AFP via Getty Images

CAIRO — A couple gets divorced every two minutes in Egypt, according to a report by the Central Agency for Public Mobilization and Statistics that was revealed by the head of the agency, Maj. Gen. Khairy Barakat, during a TV interview broadcast on Aug. 12.

Several members of parliament attributed this phenomenon to the spread of early marriage or child marriage in the country.

Sulaf Darwish, deputy of the parliamentary Manpower Committee, demanded in a press statement Aug. 12 that the punishment be increased for families who allow their sons and daughters to marry early, noting that the spread of this phenomenon directly threatens the lives and the future of Egyptian girls.

She said that marriage before the appropriate age has caused a spike in divorce cases, which in turn pressures family courts entrusted with looking into divorce cases and alimony cases for the divorced women and their children.

Child marriage has topped the list of the most controversial issues in Egypt in the past weeks, as the Eid al-Adha holiday (July 16-24) and the high school certificate exams (July 10-Aug. 2) showed how much the phenomenon has spread in Egyptian society.

During the high school certificate exams, educational administrations across Egypt reported that three girls had left the exams after experiencing severe pain and being suspected of going into labor, while three other girls were in their third trimester.

Sahar al-Sonbaty, head of the NCCM, told Al-Monitor that the council deals only with child marriage cases that are reported by neighbors or relatives through a hotline set up by the council to report cases of violations against children.

She noted that only in such cases can the NCCM intervene to stop these marriages and take pledges from the parents to not marry off their children before they reach the legal age, or to put the children in the custody of other family members if the father and mother are not trustworthy.

The NCCM received during the first half of 2021 about 6,169 calls nationwide about child marriages.

Sonbaty indicated that in some cases no action can be taken, such as when high school students had gotten married underage, and their pregnancies were discovered during the high school certificate exams.

Sonbaty said deterrent legislations for parents must be passed to eliminate the phenomenon of child marriage, similar to the law against female genital mutilation (FGM). “This [the anti-FGM law] is a deterrent law and it became stronger after toughening the penalties in April 2021 to 10 years in prison for any guardian who participates in FGM. This has contributed to curbing the phenomenon.”

According to Paragraph No. 1 of Article 227 of the Egyptian Penal Code, a penalty of imprisonment for a period not exceeding two years or a fine not exceeding 300 Egyptian pounds ($19.10) shall be imposed on every witness or legal official (specialist in registering marriage and divorce contracts with the state on behalf of those concerned) who contributed to proving that the spouses have reached the legal age for marriage before the Egyptian authorities while they are still minors.

A well-informed source in parliament told Al-Monitor on condition of anonymity that since the Eid al-Fitr holiday (May 14-18) parliament has monitored an outbreak of child marriage, and that accordingly many members of parliament initiated draft laws that provide for toughening the penalty for the legal officials, parents and witnesses who participate in the crime of child marriage.

“Some of the proposals demanded increasing the period of imprisonment for all those involved in this matter to 10 years, and the parliament is currently studying all proposals to approve or merge more than one proposal.”

However, a legal official in one of Cairo's neighborhoods who refused to reveal his name told Al-Monitor that the law is not the only solution because there are many ways to circumvent the law.

He explained, “Some families agree with the legal official they trust to write a customary [unofficial] marriage paper of three copies — one for the husband, one for the wife and a third for the legal official until one or both spouses reach the legal age with which the marriage can be documented. Should they have children, the lineage of the children to their fathers is proven through the customary paper proving the marriage.”

Sonbaty said another way to stop child marriage is to eliminate the societal and material causes that have resulted in the spread of this phenomenon, such as poverty and customs and traditions.

“Egyptian President Abdel Fattah al-Sisi pays special attention to eliminating poverty, unemployment and slums in which the phenomenon of child marriage is prevalent. In order to amend wrong customs and traditions, awareness campaigns are needed on the dangers of child marriage and its damage to children and families provided that these campaigns targets parents through the media.”