Child marriage is in the public spotlight again in Egypt, after two children were engaged in Sharqia governorate in northern Egypt. 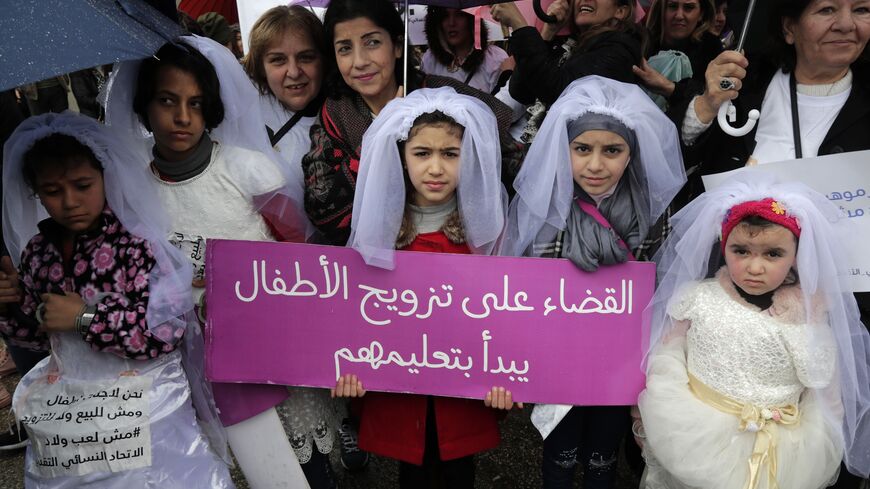 Young Lebanese girls disguised as brides hold a placard — that reads in Arabic, "The end of child marriage begins by educating them" — as they participate in a march against marriage before the age of 18, Beirut, Lebanon, March 2, 2019. - Anwar Amro/AFP via Getty Images

CAIRO — The recent announcement of two children — a 10-year-old girl and a 12-year-old boy — getting engaged has renewed the debate about child marriage in Egypt.

The news of the engagement in a village in Sharqia governorate emerged in December, including photos of the two children at the ceremony. While the family insisted the engagement was part of a "tradition" aimed at unifying the families, and that the wedding would only take place after they had reached legal marriage age, it sparked an outcry over the all-too-common custom of child marriage in the country.

The National Council for Childhood and Motherhood (NCCM) condemned the incident and vowed to end the engagement of the two children.

“The necessary measures were taken to ensure the protection of the two children from these harmful practices,” the council’s Secretary-General Nevine Othman said in the statement.

According to a 2017 census by the Central Agency for Public Mobilization and Statistics (CAPMAS), nearly one in every 20 girls ages 15 to 17 are married in Egypt. While the country has set in 2018 the legal marriage age at 18, there are no laws criminalizing child marriage.

In April, the Egyptian government approved a draft law banning child marriage. The draft law punishes the officiant of a child marriage, the parents of the minors and any adult over the age of 18 who marries a minor with imprisonment for a period of no less than a year, and a fine between 50,000 Egyptian pounds ($1,700) and 200,000 pounds ($6,750).

In December, AFP reported that the draft law is pending before the parliament. It attributed the hold-up to Al-Azhar Al-Sharif, the Islamic scientific body, which has yet to determine the extent of the proposal’s agreement with Sharia.

Mohammed Nazmi, director of the General Department for Child Help at the NCCM, said in the same statement that a team from his department headed to the village following the news of the engagement, and informed the involved families of the dangers of early marriage.

“The parents also pledged to take good care of the children and not to go through with the marriage before they reach the legal age. They also pledged to delete all photos and videos of this incident from social media,” Nazmi continued.

According to the most recent CAPMAS statistics, 96,533 underage marriage contracts were recorded in Egyptian villages in 2021, compared to 20,687 in cities.

Samia Ali, a 62-year-old woman from a village in Kafr el-Sheikh governorate in Lower Egypt, told Al-Monitor that child marriage is a matter of customs and economic needs, and not laws. “This phenomenon [early marriage] is linked to customs in rural communities because people there believe that girls should marry young so their dignity remains protected. In addition, marrying off children alleviates the father’s financial and social burdens, while increasing the lineage of the family, because in most cases marriage takes place between members of the same family," she said.

In 2021, nearly 1 in 5 women aged 20-24 were married before turning 18. To end child marriage by 2030, progress must be 17 x faster than in the last decade.@UNDP, #EU & UK Government are working to end child marriage in Egypt.https://t.co/s4mZmaJ0RF#OrangeTheWorld #16Days pic.twitter.com/TL0NJYXRoL

Meanwhile, experts and activists stress the need to reduce the phenomenon of child marriage in Egypt, because of its negative effects on society and psychological and health damage to children.

Samia Khader, professor of sociology at Ain Shams University, told Al-Monitor that the problem is tied to education.

“Awareness campaigns — especially on TV — have a strong impact on villagers, particularly on those who are illiterate, but the illiteracy rate — especially among women — is one of the main reasons behind early marriage," she said.

“Early marriage leads to dropping out of school, in addition to contributing to population growth,” Khader noted, stressing the need for TV programs to address issues of early marriage and population increase, rather than focusing on entertainment content in women's programs.

Khader noted that despite the draft law banning child marriage, there are ways to evade it. "One can still get around the law, as some children marry at an early age but wait until they reach the legal age of 18 before completing official procedures," she said.

She stressed the need for the law to be stricter and clearer, in addition to intensifying awareness campaigns about the dangers of child marriage.

In a statement posted on its official Facebook page last April, the Egyptian government insisted that child marriage is a crime and has a negative impact on society. But it remains to be seen whether the law will be enacted.