An Egyptian lawyer proposed an initiative for couples in Egypt to sign a contract with a set of rules to avoid quarrels that lead to divorce. 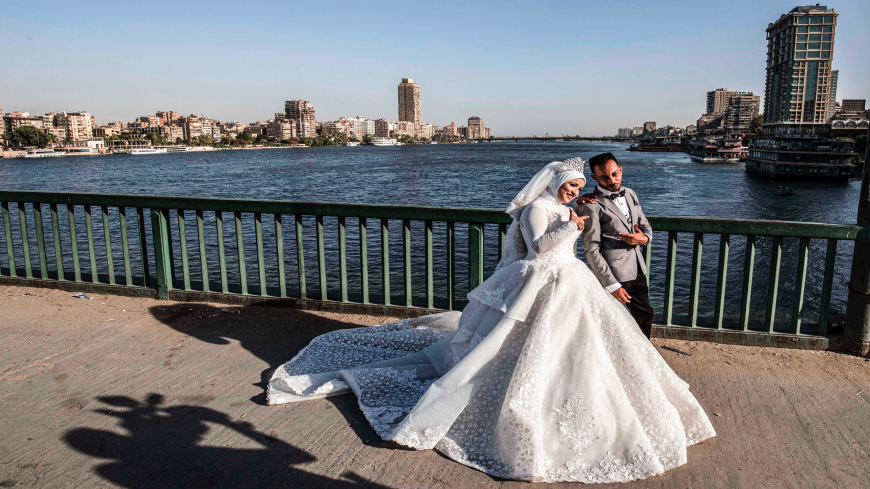 Ragab Uwais, 29, poses for a picture with his bride before a video cameraman for their wedding video along al-Gamaa bridge connecting the Egyptian capital, Cairo, with its twin city of Giza, on June 11, 2020. - KHALED DESOUKI/AFP via Getty Images

While on the verge of breaking up with her fiance, Rawda Hassan heard about a new initiative called “experimental marriage.” She thought this initiative could give a kiss of life to her relationship.

“I’ve been engaged for two years and I’m still not sure if I’m ready for marriage. We always quarrel about many issues; that’s why I’m always afraid. But after my friend told me about the initiative, I guess I’ll think about it,” Hassan, 26, told Al-Monitor.

The initiative, titled “Experimental Marriage,” was launched by Egyptian lawyer Ahmed Mahran to help couples avoid early divorce. Yet it has caused an uproar in Egypt.

The initiative consists of adding to the ordinary marriage certificate a civil agreement contract with articles written and agreed on by the couple. It gives them the right to end the marriage when any of them break the conditions listed in their contract. The one who breaks the rules pays all the financial rights for the other.

“I’m a specialist in women and family legal cases, and I find that most reasons for divorce are always very trivial. Some newlywed couples don’t show any responsibility and don’t understand the values of family,” Mahran, who is also the manager of the Cairo Center for Legal and Political Studies, told Al-Monitor.

According to a 2018 report by Egypt’s Central Agency for Public Mobilization and Statistics, one-fifth of marriages in Egypt end in divorce each year; 40% of divorces occur within the first five years of marriage.

“We have about 8 million divorced women, and that's a huge number. That’s why I thought about this solution to decrease the divorce rate in Egypt,” Mahran said.

“Women want to get divorced, but men are always refusing it because they have to pay a lot for women for livelihood (alimony) afterward,” Mahran said.

According to the lawyer, financial losses after divorce have a significant impact on the couple's decisions.

“Some couples, when they know how much money they will lose after divorce, take a step back and decide to find other solutions for their marriage life instead of divorce,” he explained.

According to studies by the Cairo Center for Legal and Political Studies, most divorce cases happen among newlywed couples who divorce during their first six months to one year of marriage.

“With our initiative, we oblige the couple to stick to the rules they already put to avoid divorce and also avoid paying lots of money,” Mahran said.

“We hope that after they spend over three years with each other, they understand each other better or even become parents for a child and the problems will be minimized then,” he added.

The conditions couples put in the contract may include whatever the couple wants. A wife can demand that her husband not marry another woman nor force her to leave her job, and that he cannot prohibit her from traveling alone. A husband can ask that his wife not have social media accounts or a job, and they both can ask for conditions regarding child custody in the event they divorce.

In ordinary cases, if a woman wants a divorce and her husband refuses, she goes to court and spends at least four to seven years to get some of her rights. But with this contract, she will get her rights much faster, since such circumstances would have already been covered by the couple, according to Mahran.

Although the initiative may help couples assure a healthy relationship, Islamic scholars reject it and describe it as against the traditions of Islam. This is because the contract may give the implication that there is an “intention for divorce.”

Islamic scholars also argue that these marriages are invalid because they are like a mut’ah marriage, or a pleasure marriage.

“Islamic scholars who attack the idea in the media don’t understand the details, so they should not give an opinion about the initiative,” said Mahran, who added that he has written about 50 contracts for 50 couples since he launched the initiative a few weeks ago. He said that married people can also sign a contract for their relationship to improve it.

Samia Khedr, professor of sociology at Ain Shams University, told Al-Monitor this contract could make it possible for couples to manipulate each other.

“In the ordinary marriage certificate, the couple can write whatever they want regarding their rights and duties, so the initiative is not a new thing; it is just propaganda that may lead the couple to more problems,” said Khedr.

“Marriage should be built on love and compassion, not contracts that can even add difficulties to marriage,” she added.

Khedr said there should be campaigns that help couples know how to treat each other and respect the sacred relation of marriage.

“We should also think about easing marriages to help more people get married. Family relationships should be secured to make our country secured,” she added.

While Hassan is thinking about joining the marriage “experimentalists,” Nesma Ahmed, 32, an unmarried art teacher, has another opinion.

“If there is love in the first place, we won’t seek a contract to regulate our lives. What a stress to live under rules everywhere,” Ahmed told Al-Monitor.