The dire economic situation in the Gaza Strip is making the monthlong job of the musaharati, who wakes people before dawn to break the Ramadan fast, one of the most dependable sources of income all year. 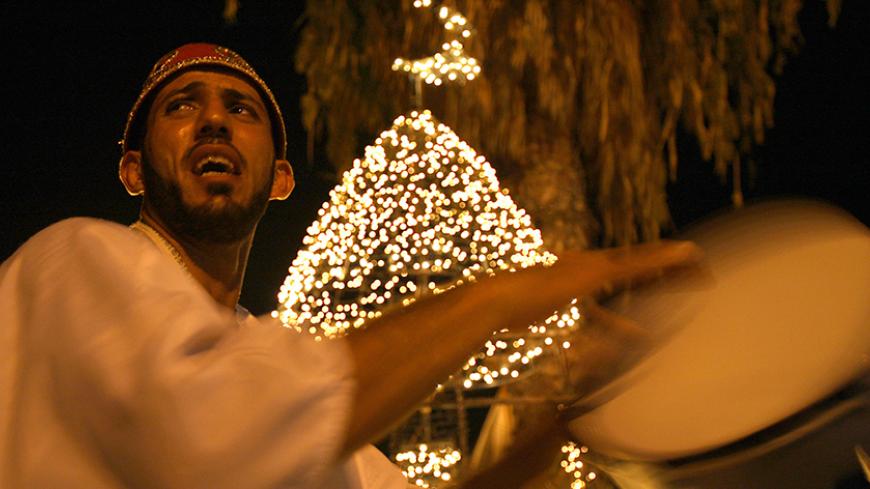 A musaharati, or dawn awakener, strikes his drum to wake observant Muslims for their last meal before the day's fast in Sidon's Old City in southern Lebanon just before dawn, Aug. 27, 2010. - REUTERS/Ali Hashisho

GAZA CITY, Gaza Strip — Children wait on their balconies for the musaharati​, the man who roams the roads, beating drums to wake up the neighborhood to have the predawn suhoor meal and get ready to fast until sunset.

Both children and adults watch for the musaharati, as people stay up all night long during Ramadan. When he appears, he is greeted with cheers and some even go out on the street to offer him gifts. However, things are not always what they seem, and those who bring others joy might not necessarily be happy themselves. This is the case of 23-year-old Louay Jaber, who chants religious hymns as he roams the streets of al-Rammal to wake up the neighborhood's residents.

Louay waits all year to work during Ramadan, as he has never found any other secure job. “We wait all year long for this month. During the rest of the year, we take up jobs here and there, mostly in construction. However, with the ban on cement into Gaza, it is almost impossible to find a job nowadays,” he told Al-Monitor.

Louay said he goes out every night from 2 a.m. until 3:30 a.m., roaming the streets of al-Rammal from the Shati refugee camp, where he lives. “We wake people up throughout the month of Ramadan. On the first and last day of Ramadan we go knocking on doors to collect money from families who would like to offer us some,” he said.

The people of Gaza have been living under blockade for eight years and have suffered three wars and political divisions, resulting in serious deterioration in their living and economic conditions. According to the World Bank statistics published by the United Nations Relief and Works Agency for Palestine Refugees in the Near East (UNRWA), the unemployment rate in Gaza reached 43.9% in 2014, the highest in the world. Unemployment among youths hit 60% that year.

“I have been working as a musaharati for about six years now. Last year, the war broke out two weeks after the start of Ramadan. The Israeli jets took over our jobs of waking up people by bombing and spreading terror,” he said.

Louay does not go to work alone. He is accompanied by his cousins Rashad, 24, and Mohammed, 30. Each of them beats his drum to the melody of Louay’s chanting of “Wake up, people, don’t say no. How could you say no to fasting and praying?”

Louay’s two cousins told Al-Monitor that being a musaharati has become a source of income for unemployed young men in Gaza, but it only lasts one month every year and does not amount to more than $200 by the end of Ramadan. They split the amount among them and are left with little.

According to a UNRWA report, the poverty rate in Gaza stands at 39%, an increase of 11% since 2013. The report found that the 2014 conflict has exacerbated an already deteriorating situation.

Louay, Rashad and Mohammed have a permit from the Interior Ministry to work as musaharatis. Police spokesman Ayman al-Batinji told Al-Monitor that the ministry determines the scope of the musaharatis’ work in the different areas so as to avoid any conflicts with others who do the same job.

Nahed Jaber, Louay’s uncle, supports 13 family members. He goes out with the three from time to time but lags behind in his white jalabiya robe, occasionally drowning out the boys’ chanting, singing, “Wake up, sleepy people.”

“As a young man, I used to work as a musaharati. But the days back then were much nicer than today. Ramadan was different, as people used to welcome the musaharati with more joy, cheers and generosity. Today, sorrow is prevalent,” he told Al-Monitor.

Historian Selim al-Mubayyed told Al-Monitor, “The musaharati first appeared with the emergence of Islam. During the Fatimid area, drums were added to the profession and the lantern emerged as well, and was linked afterward to Ramadan. The use of lanterns emerged as well, and became associated with Ramadan after the people of Egypt held up lanterns at night during Ramadan to receive Caliph Al-Muez Li-Dinallah al-Fatimi. This piqued interest in Ramadan traditions, which later on spread out to the Levant.”

Mostly young people work as musaharatis. Abdullah al-Mahallawi, 23, wakes people in the Nasser neighborhood in Gaza City. He has been a musaharati for five years and is usually accompanied by his friends Mustapha al-Kadiri, 24, and Ihab al-Namnam, 23, who is trained as a medical secretary.

Abdullah told Al-Monitor, “We are pleased to see children and people who are happy to see us coming into their neighborhoods or homes. However, no one knows how heavy our burdens are and the number of mouths we feed. The conditions in Gaza are going from bad to worse.”

As he departs, the musaharati​ leaves not only quiet after his sweet voice dissipates, but also sorrow in the hearts of those who awaited him, as though the joy he created was born in a moment and disappeared forever.