In Gaza, no one knows who will survive

A firsthand account of the human suffering in Gaza. 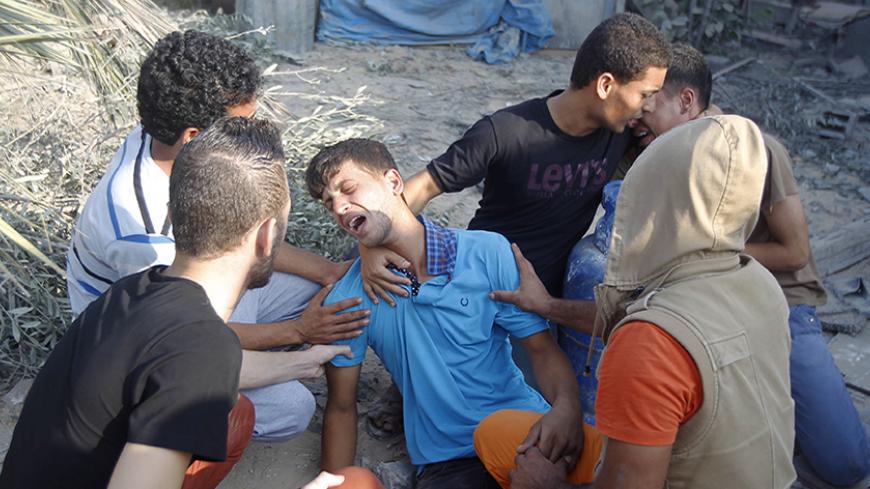 Palestinian relatives mourn for victims of a family near the rubble of their home after it was destroyed by an Israeli airstrike in Rafah, July 29, 2014. - AFP/Getty Images/Said Khatib

GAZA CITY, Gaza Strip — No one feels the suffering of Gaza’s people except the actual victims. It seems that only the person who has been injured feels injury. Only the dead suffer in death. Only those who lose their homes experience the loss.

The images of children being killed by tons of iron and gunpowder has become a political goal. No matter the size of our grief, it remains small compared to that of the actual victims who have been injured, have lost loved ones or no longer have a home.

What Israel is doing to the civilians of Gaza is shocking — indiscriminate shelling and killing, destruction of entire residential buildings with occupants inside. They say that death by bombing is painless, but no one knows from where death will come. There is no safe place for you or your family. You wonder why planes and shells are trying to kill you as you sit with your family. Why are they killing your children in front of you? Killing you in front of them? Killing all of you, leaving no witness to your final moments?

Israel's intent to destroy the Dawud building, which is next to my family's house and has been bombed several times, was conveyed in a phone call to a building resident. Then the Israelis fired a warning rocket on the afternoon of July 21. Everyone in the neighborhood began screaming — nearby residents, the people in our house (from which the building can be seen), the owner of a nearby restaurant and shop.

We and the neighbors went outside and left the keys in the doors. The moment of horror is not when the missile pulverizes your body, but when you realize that it is on the way, whether after receiving notice or from the actual sound of the approaching shell.

We reached a safe place. The initial shock dissipated, and our thoughts turned to the pictures and memories we had left behind in the house: babies' first steps, the drawing on the wall, my sister’s wedding party in the living room.

You think that you are ready to start over as long as no one dies, but the sadness in your heart makes you go on with your life even after having lost your child or your mother to a shell that tore them to pieces. The shell disfigures a body to the point that it becomes unrecognizable. We try to console the orphans, but do we really know how someone who lost his father or mother feels?

My family sought shelter in my cousins’ home. Earlier, at the beginning of the war, my cousins had sought shelter in our home, but suddenly their home became safer than ours. In this war, it is hard to compare how safe different locations are. We ponder the mood of the fighter pilots as to which family they will target that night. For example, they warned the tower block next to us, but they bombed another one without warning, killing the al-Kilani family. There is a complete disregard for civilian life.

It is a war of religious ideologies. The bloodshed has come to be seen as for the sake of God or heaven or the Promised Land. Feelings are ignored as long as the political goal is being attained, and the religious reward is on the way. When this happens, ideology trumps humanity.

In the first week of the war, the media followed the story of Shaima al-Masri, 4. The only family she has left is her father Ibrahim al-Masri. Sitting next to his daughter, who lies in a bed in al-Shifa Hospital, he told Al-Monitor, “I thought that sending my wife to her sister’s home will make her safe. But minutes later, I heard the explosion. I ran down the street, then I received a phone call that my son had been martyred. At the hospital’s entrance, I was told that my wife was martyred. I found my eldest daughter, Asil, in critical condition. She woke up for a few seconds and asked me where her mother was, but then she died in the operating room … I later went to where they got martyred and found that a plane had targeted them 10 meters before they reached the house of my wife’s sister.” Shaima’s mother, Sahar, her brother, Mohammed, 14, and her sister, Asil, 17, all died in an Israeli air strike in the northern Gaza Strip on July 9.

Where can children be safe? That was the question I kept asking myself as I moved my children from house to house. I was separated from my family for the first time when they decided to remain in my uncle’s house. I preferred to take my son and daughter to another place until I could find an apartment where we could again gather. I learned that some people had left Gaza for Egypt. I don't think I can do the same. I found one apartment, but its Palestinian owner doesn’t accept Palestinians, only foreigners! Such is the racism and greed that the war brings out in some people.

If you listen to the partisan radio, you would think that our strength is equal to Israel’s. It is a high moment and the point of no return for the ideologues, whose stubbornness is equal to the blood being shed. In their opinion, what I am saying is defeatist, but it is simply natural fear for my family and sadness for the rest of the children. Words of regret can no longer heal the pain.

I finally found an apartment next to the port. I want my family to survive. I don’t know, no one knows, whether my family has survived or if we have only temporarily escaped death.

I returned to al-Shifa, looking for the wounded from the al-Salam residential building. I was informed, “There are no wounded. All of them arrived dead.” Less than a day later came the Khuza’a disaster and the indiscriminate shelling of Khan Yunis — a new Shajaiya.

I entered the pediatric surgery room, where I found a child named Louay Siam, 9, entirely wrapped in bandages. His face and head were burned, but you could still see his tears. His brother Uday Siam, 12, lie in the next room with burns so severe his bones were exposed.

Their cousin Mohammed Siam told Al-Monitor, “His mother, grandmother and aunt were preparing pies on the roof of the house. The children were playing in front of them when the Israeli jet bombed them. Nine of them died.”

The Siam family had fled from the Zeitoun neighborhood east of Gaza to their relatives in the al-Rammal neighborhood in central Gaza, a supposedly “safe” area according to the Israeli army in the warning messages it sends so families can leave their homes for those areas. The planes followed them there.

Abu Zeid Abu Nasser, a neighbor of the Siams, said, “Uday and Louay's father is a seller of fruits and vegetables that come from Israel. He has nothing to do with any political party … I don’t know why the plane bombed them … They’ve [the Israelis] gone crazy.”

Abu Nasser pointed to the plastic tube in Louay’s nose that sucks the ash from his lungs. He said, “[Louay’s] condition prevents him from drinking water … He is crying because he’s thirsty.”

In our new apartment, you can hear the sound of the sea mixed with the sound of Israeli drones crossing the sky. Israel's warships fire shells. It’s dark everywhere. The electricity has been out since Israel hit the main station on July 23. On our battery-powered radio, we heard Khaled Meshaal, head of Hamas’ political bureau, saying, “We will not accept a truce without achieving our conditions.” My heart sank, and I got ready for another day of counting new casualties.