More commonly encountered at a corner stand after a night out, doner kebab is now served with new condiments at fine-dining restaurants in Turkey. 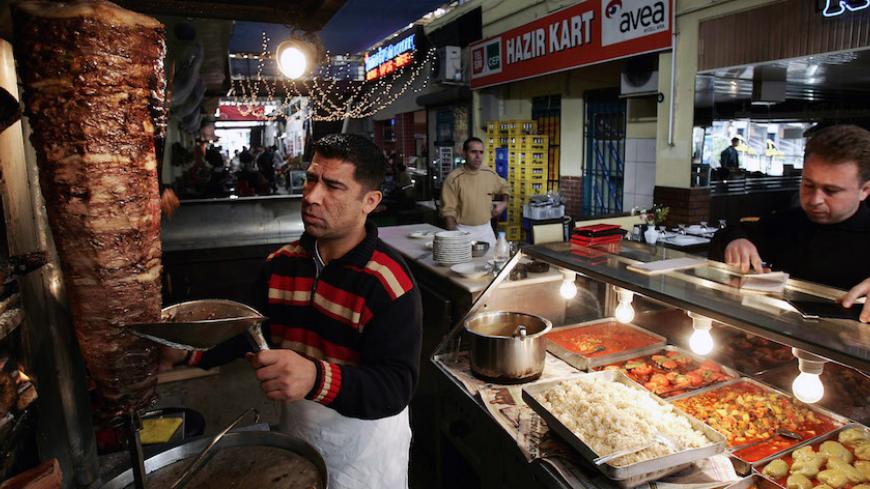 A Turkish cook prepares doner kebab made of beef in a small restaurant in the Mediterranean Turkish city of Antalya, Jan. 17, 2006. - REUTERS/Umit Bektas

What is the best known Turkish food in the world? Rather, the one food item that is the most widely available all around the world, originating from Anatolia? It is not Turkish coffee, baklava or even the simit. The ubiquitous Turkish food is doner kebab. Depending on where you live, you may know it as gyro (Greek, made mostly with pork), tacos del pastor (brought to Latin America by Lebanese immigrants), shawarma in Arabic, Kebab Torki (in Persian) or simply as doner in Turkey. Doner, after all, has become the one food item that travels rather well, adapting to the taste buds of different cultures. It is quite versatile, as it can take on cabbage, curry sauce or mozzarella cheese as condiments, or be served on its own, inside a wrap or over rice.

It has become the most sold food item all around Europe after midnight. Doner kebab stands are the most frequented between 11 p.m. and 3 a.m. in many European towns. Doner has become the post-drinking binge snack, the must-have street food. That is how doner gained the reputation as the top competitor against the burger chains.

So what are the origins of doner? After speaking to multiple food writers, chefs and historians, one can only agree that the exact origins of doner are unknown. However, most pundits agree that it was not cooked on a vertical spit over a fire until the 18th century. Rather, it was prepared horizontally over a charcoal fire. You can still see this way of cooking in some parts of Turkey, such as the eastern city of Erzurum. It is called cag kebabi. As American food journalist Robyn Eckhardt, who has done years of research in Turkey looking for unique local tastes, told Al-Monitor, “Cag kebabi is the uber doner. It is called a kebab but cooked like a doner, right? You get the best of both words — an initial char from the spit and then, after the meat has been shaved onto a skewer and given a flash over coals again, you get the extra char and texture from the bits that become crispy.” Eckhardt, just like any other gourmet, dismisses any attempt to produce doner on a gas or electric grill.

Turkish-born chef Somer Sivrioglu, owner of Efendy Restaurant in Sydney, Australia, who has published “Anatolia,” a delightful book on Turkish cuisine, concurs with Eckhardt: Doner is not one of your 30-minute meals that can be whipped up at home. Decent doner takes at least 24 hours of preparation, and quite a few hours of roasting over the hot charcoals. Never coming in direct contact with fire, the well-marinated lamb or veal meat slowly roasts as it spins over the heat. While its fat drips over the hot coals, it releases a unique blend of smoke that enriches the flavor of the fresh meat. Ideally it is cooked in open air. It is shaved into thin slices as the cooking process continues: One side of it becomes ready to be trimmed, while the other is still roasting. That makes the preparation worthy for big gatherings, feasts or for commercial use.

Hence, in certain southeastern towns of Turkey, such as Gaziantep, Adana or Diyarbakir, it is known that different types of kebab specialty restaurants are open during different times and cater to different clientele. For example, restaurants that mostly serve blue-collar workers prepare liver kebabs early in the morning. It is consumed as an on-the-go breakfast. Liver kebab restaurants close shop before noon, and that is when the regular kebab shops (lamb or veal) serve sit-down lunches and dinners to customers.

For those curious about how doner is prepared, Sivrioglu has prepared a quick mouth-watering video. “Even in Australia, where I live, kebab shops are one of the most common fast-food takeaway shops in busy hubs of the city," he said. "As it is an industry now, you can find factory produced, frozen kebabs all around the world catering for takeaway kebab shops. If you ever work in a busy doner kebab restaurant in Turkey watching the master, cutting leaves from meat — mainly beef for Iskender or yaprak (leaf) doner, marinating in onion juices and skewering on to the giant kebab skewer, cooking on charcoal doner grill — it is easy to understand why the taste is so much better in Turkey than in other countries. When it comes to doner kebabs, simplicity is the best, freshly baked sac or tandir bread, freshly cut meat from the charcoal grill and a touch of pickles is simply heavenly.”

World-renowned chef Mehmet Yalcinkaya, known for his fusion and modern Turkish cuisine expertise, agrees with Sivrioglu about simplicity. When the meat is prepared properly, Yalcinkaya believes the simpler the presentation the more intense the taste. He says that doner in Turkey is emphasized as a healthier alternative to a burger, but also marketed as “doner burger” frequently for the youth. Yalcinkaya believes this is only possible when the lean slow-cooked meat is served without any additives. In fine-dining settings, we can now see doner on menus, served over roasted eggplant salad or other vegetables for the health-conscious clientele. Yalcinkaya says these establishments also use either wooden or cooper plates to enhance the taste and authenticity of doner presentations. Unthinkable only a few years ago, you can find doner served with hummus or even cheese in Turkey. Traditional doner lovers, baffled by these options, would not even consider consuming out-of-season tomatoes with their doner.

Despite the lucrative trade of spinning meats — for which there is a 24-hour functioning doner robot that cuts meat without a need for a human chef — a traditional doner spit is rare in Istanbul. One restaurant known for its intense-flavored doner is Donerci Ali Usta, named after its owner Ali Ozcan. Manager Alpaslan Kodoglu told Al-Monitor, “We are busy at every hour, and our Iskender kebab [doner served with yogurt and buttery tomato sauce] is [our] most popular item.”

Another family-owned popular spot in Istanbul is Bayramoglu Restaurant of Kavacik. Opened in 1990, only recently has the restaurant become a must-go location for the hip crowds of Istanbul. “Our most popular item is the doner plate. It is simple but most in demand,” said Baran Aslan from the Bayramoglu family establishment. Bayramoglu has kept its traditional simple and short menu. You can have your doner wrapped in freshly baked lavash bread, over rice or just as a doner plate. They serve salads, sodas and a few traditional desserts. No alcohol is available in the majority of restaurants called “donerci.” If you would like to enjoy a glass of raki or wine you have to opt for more upscale restaurants.

Doner in Turkey or worldwide is made using various methods with different meats (chicken, pork, veal or lamb) and spices, and is served with a variety of condiments. It is precisely the versatile character of this simple food that gives it a global reach. Yes, if you enjoy meat, do not be shy — the next time you see doner spinning on a vertical or horizontal spit over the charcoal grill, go ahead and give it a try!