Pinar Tremblay examines the impact of Turkey's public-diplomacy efforts in Yemen and whether they should be considered "neo-Ottomanism." 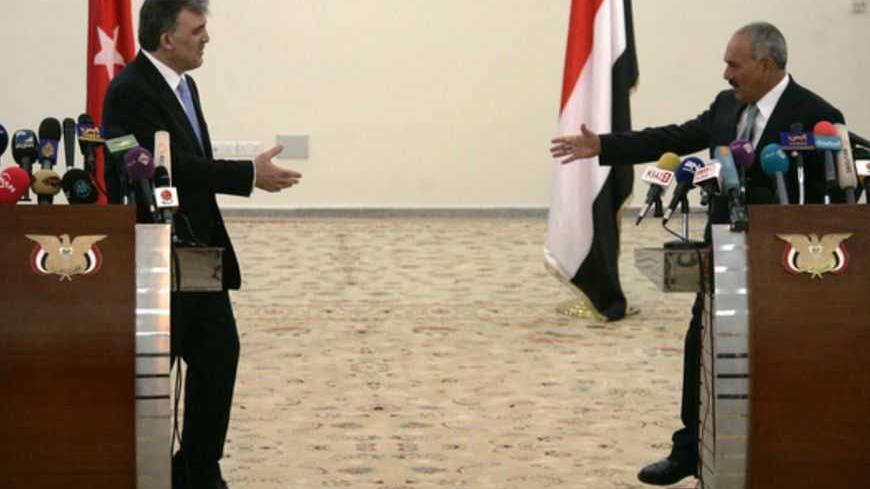 Aktay was in Yemen on a diplomatic trip when he tweeted that Yemeni Kurds yearn for Turkey as their “motherland” and that they advise Turkish Kurds to stand by Erdogan “wherever he is standing.” Reading Aktay’s tweets and their baffled replies, I could not help but wonder what Turks are doing in Yemen.

Although I prefer to refrain from using the tainted term “neo-Ottomanism” when talking about Yemeni-Turkish relations of the last decade, rhetoric about “shared history and culture” generally masks the Turkish presence in Yemen. Indeed, from a scholarly perspective, there is plenty of naïve and idealistic rhetoric, but little rational explanation, in the framing of Turkish relations with Yemen. Much of the blame falls on the inept and amateurish style of Public Diplomacy Office in Ankara — neo-Ottoman diplomacy.

In the last decade, the AKP’s “here and there” activism, especially (but not exclusively) in former Ottoman lands, has kept bureaucrats on their toes. Yemen today seems to have little friction between career diplomats and AKP’s youth activists and party-nominated “advisers.” Every day a flock of Turkish academics, journalists and pundits tweet their “hug a Yemeni, buy a jambiya” photos from Sanaa. Quarrels have erupted on social media over whether chewing qat is halal.

Just a quick look at trade data shows that Turkey barely imports anything from Yemen, but Turkish exports to Yemen have doubled since 2009 — more than Turkey's exports to Bahrain, Kuwait or Oman. Since 2008, Turkish aid to Yemen has been quite intense. The Turkish Cooperation and International Development Agency, which opened a coordination office in Sanaa in June 2012, has been active in coordinating aid in the health, education and transportation fields. There have been high-level visits since 2010, including the January 2011 visit of President Abdullah Gul, the October 2012 visit of Foreign Minister Ahmet Davutoglu and the February 2013 visit of intelligence head Hakan Fidan to Sanaa. Yemen has a Turkish school, and Turkey extends scholarships for college students to study in Turkey. Turkey has promised financial aid, and Kimse Yok Mu and other Turkish NGOs have delivered food to Yemen.

But not all Yemenis appreciate these Turkish efforts. Indeed, a group of parliamentarians asked the Yemeni government to sever diplomatic relations with Turkey in December 2012. When events cannot be verified through independent sources, rumors spread. The Middle East, where even the simplest government matters are shielded behind a veil of secrecy, provides fertile ground for conspiracy theories. Successful public diplomacy should minimize unwarranted doubts and rumors.

Yemen is a poor, war-torn country with strong tribal influence over its politics. Yemen has experienced a somewhat successful wave of revolution and a change in government, but it continues to face its hardest struggles, with poverty and terror networks, particularly al-Qaeda. The Yemeni revolution did not quite make the same emotional headlines in Turkey as those in Tunisia, Egypt or Syria.

The AKP government hasn't been vocal about the most notorious Yemeni security concerns, such as al-Qaeda's networks, US drone policies or the Saudi role. But you would be wrong to assume this silence indicates a lack of interest in Yemeni politics. Indeed, since 2011, Turks have accelerated their aid efforts. Most of their deliveries are humanitarian, providing food and medical supplies. But if you follow Yemeni newspapers and social-media pundits, you'll find them chattering not about Turkish medicine, but guns.

In March 2011, the UAE seized cargo containing Turkish weapons en route to Yemen. The Turkish Foreign Ministry denied any government involvement. In November 2012, another weapons shipment was discovered in Aden. The ship had been loaded with guns in the Turkish port of Mersin. The Turkish government has denied any involvement, and no charges have yet been pressed against any individuals or companies.

As there have been several targeted killings in Yemen, Kifah, a Yemeni NGO established to combat terrorism, has demanded that the Turkish government release the names of individuals responsible for the weapons. If the names are not released, Kifah has threatened to petition the International Criminal Court to prosecute the Turkish government. Their concern is not just over the weapons shipment, but also that these Turkish weapons have been used in assassinations. These are serious charges.

Vivian Salama explains the rifts in Yemen eloquently. Three main groups could be the recipients of these weapons. The first two are the al-Houthi Shia rebels and the southern separatist movement, Herak. Both the Houthis and Herak are known to have good relations with Iran. The third is a prominent businessman, Hamid al-Ahmar, also a leading member of the Islah party, the Yemeni Muslim Brotherhood. Islah is known to have good relations with Turkey’s ruling party. While Islah members blame Iran for the weapons flow, other groups point to Turkey. Kifah has blamed Turkey for providing the weapons, but also accuses Iran and the United States of trying to further destabilize Yemen.

The Yemeni issue in Turkey's foreign policy supports the argument that the spotless reputation of the neo-Ottomans is a myth. Turkey's involvement in several countries has gone beyond the calculations of the Turkish state, and coordination efforts have fallen behind the passionate activities of the NGOs, businessmen and even newly created government agencies. Turkish public diplomacy has a lot of catching up to do to generate a positive image of Turkey among Yemenis. The moral clarity of neo-Ottomanist public relations leads to strategic folly, despite Turkey's sincere humanitarian efforts in Yemen. Indeed, Turkish public diplomacy resembles the Yemeni Kurds of Aktay’s tweets. Yes, it exists, but its effectiveness is questionable to say the least.

Pinar Tremblay is a PhD candidate at UCLA in political science and an adjunct faculty member at Cal Poly Pomona. She has previously been published in the Hurriyet Daily News and Today's Zaman. Follow her on Twitter: @pinartremblay.