Turkey allows building of first new church in a century

Syriac Christians, who speak the language of Jesus, will finally have a church in Istanbul, but why now? 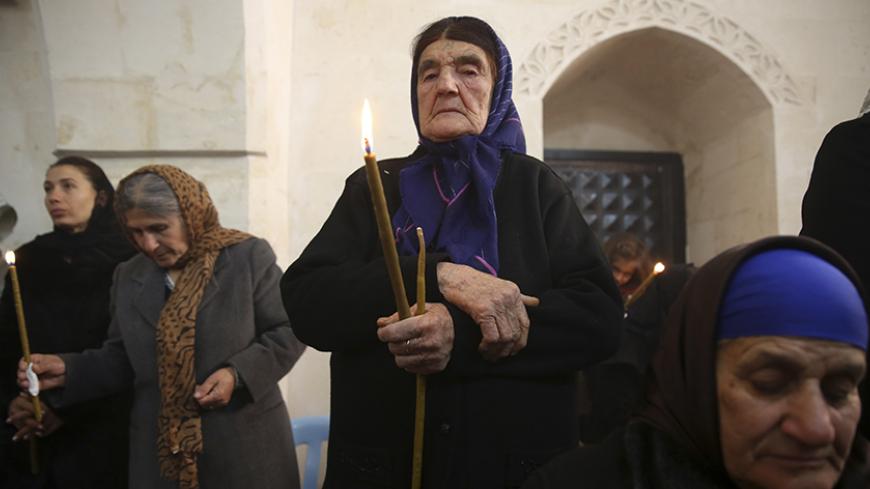 Syriac Christians from Turkey and Syria attend a mass at the Mort Shmuni Syriac Orthodox Church in the town of Midyat, in Mardin province of southeast Turkey, Feb. 2, 2014. - REUTERS/Umit Bektas

On Jan. 2, Turkish Prime Minister Ahmet Davutoglu met with the leaders of religious minorities in Turkey, including heads of various Christian denominations and the Jewish community. One bit of breaking news from the meeting was the government having granted permission to build a new church in Istanbul. This was, as the media noted, “a first in republican history.” No new Christian place of worship has been allowed to be built in Turkey since the collapse of the Ottoman Empire, during World War I.

The new church in question will be built in Istanbul's Yesilkoy district, not too far from the Ataturk Airport, and will serve the community of Syriac Christians. This ancient community, which is not much known in the West, is the source of the oldest Christian traditions. Its liturgy is in Aramaic, the language of Jesus. There are some 17,000 Syriac Christians in Turkey, the majority of whom live in Istanbul. They need a spacious church.

In fact, the promise to allow Syriac Christians to build a church in Istanbul dates back to 2009. Yet in the past five years, bureaucratic obstacles have kept the project in limbo, said Laki Vingas, who until recently had served as the elected representative of the non-Muslim foundations in Turkey. In remarks to Al-Monitor, Vingas noted that while Davutoglu’s emphasis on the project was welcome, the ball still remains in the court of the Ministry of Culture, which must still authorize the actual building of the long-awaited church.

Such technicalities aside, the meaning of Turkey allowing a new church to be build (albeit rather sluggishly) after almost a century deserves some thought. What is particularity notable is that it is happening under an “Islamist” government, that of the Justice and Development Party (AKP), which is often accused of moving Turkey away from its secular roots. Is there a contradiction here? Not if one looks a bit deeper into Turkey’s pre-AKP “secular” past.

This era, from the 1920s to 2002, was defined not only by secularism, but also by a very rigid nationalism that viewed Turkey’s non-Muslim communities as threats to the nation’s unity. That is why some of the foundations, churches and schools that non-Muslims had freely operated under the Ottoman Empire were confiscated or closed during the republican era, especially during times of military rule. For example, the Halki Seminary, where the ecumenical patriarchate once trained its priests, opened in 1884 under Ottoman rule, and was closed in 1971 under “secularist” (and extremely nationalistic) military rule.

When the AKP came to power in 2002, it claimed to seek to correct the misdeeds of its secularist-nationalist predecessors, which included restrictions on minorities, among them non-Muslims and Kurds. Numerous reforms have thus been realized for these communities during the AKP years. As noted by the United States Commission on International Religious Freedom, these reforms helped “improve religious freedom, including regarding minority communities’ property rights, religious dress, and education.”

The European Union accession process certainly played a helpful role in these reforms, but so did the “neo-Ottomanist” ideology of the AKP. The multiethnic and multireligious heritage of the Ottoman Empire was a relatively more liberal frame of reference compared with the secular-nationalist official ideology of the republican era. Neo-Ottomanism, however, does have its shortcomings. First, it has little tolerance for “heresy” or “division” within Islam. Hence, there is the AKP’s persistent unwillingness to address the grievances of Alevis, Turkey’s largest non-Sunni Muslim community. Second, while neo-Ottoman tolerance toward non-Muslims is much more subtle than persecution, it is based on a hierarchical view of the nation rather than equality.

Vingas complained of this hierarchical tolerance, saying he sometimes feels that Turkey is owned by Muslims, and non-Muslims are merely allowed as eccentric cultural toppings. “That is why I was happy to see Prime Minister Davutoglu emphasizing 'equal citizenship,'” he said. Davutoglu, indeed, underlined “the principle of equality … [as] the foundation of the government's policies.” In response, an opposition spokesman blamed the AKP for allowing the proliferation of “missionary activity.”

These are the complexities one should keep in mind while analyzing the status of religious freedom in Turkey. To assume that such problems occurred during the AKP era because Turkey moved away from a liberal secular past to an oppressive Islamist period, would be to believe in a counterfactual characterization.

Yet, the AKP nonetheless deserves criticism in this area, and more so in other areas, such as freedom of the press. One problem is the feeling of hierarchical tolerance that Vingas pointed to. It assumes that Muslims are the bosses, and non-Muslims should know their limits. Another is the AKP’s continuation of some bad state habits, such as the principle of “reciprocity” with Greece. This practically means that unless Greece introduces reforms benefiting its Turkish Muslim citizens, whose rights have been violated due to nationalism on the Greek side, Turkey will not make reforms beneficial to its Greek Orthodox citizens. The Halki Seminary remains closed mainly because of this reciprocity principle. Ankara awaits Athens' permitting a new mosque in the Greek capital.

Yet another problem is the hate speech one frequently finds in the Turkish media, especially the pro-government media, against non-Muslims, in particular Jews. Some “news” and editorials in certain pro-government papers, in fact, sound like updated versions of the Protocols of the Elders of Zion. At various times, government spokesmen have said that they do not endorse these views, but it would be much better if they opposed or refuted them, as they are known to condemn almost anything in the media that they really dislike.

In short, the hopefully forthcoming new church in Istanbul is good news, and it should be added to the other positive steps Turkey has taken since the early 2000s toward more religious freedom. There are many more steps, however, that need to be taken.