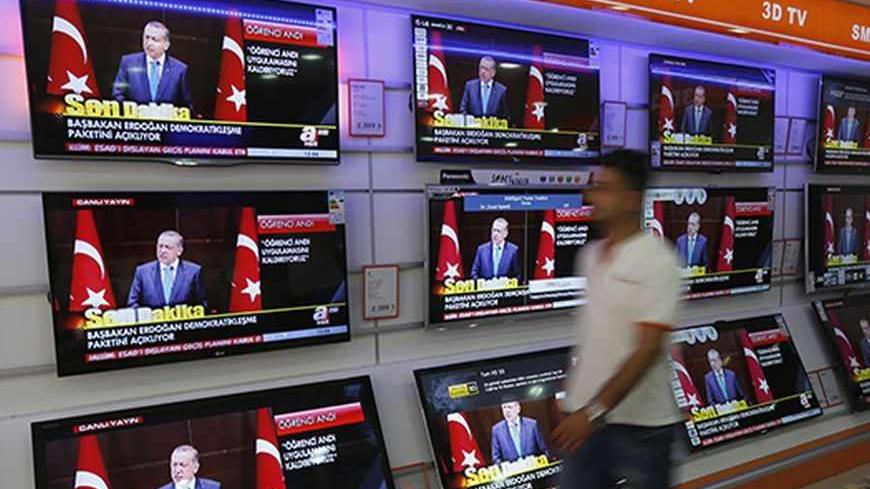 Turkish Prime Minister Recep Tayyip Erdogan may in the coming weeks have serious difficulties winning over discontented segments of the society, as well as the political groups within the EU, which apparently were not impressed with his long-awaited "democracy package."

The 21-point declaration for reform was anticipated with expectations raised, mainly by the delay of the AKP and Erdoğan’s promiseful rhetoric. Though he tried to tone it down, it was tightly linked to the so-called "Peace Process" with the outlawed PKK, and its political wing, the BDP. The government, keen on the conservative-nationalist sensitivities on the issue, covered a broad range of issues, such as hate crime and privacy.

"The announced measures hold out the prospect of progress on a range of important issues, including use of languages other than Turkish in a number of instances and minority rights such as the case of the Mor Gabriel Monastery," said Peter Stano, spokesman of Štefan Füle, member of the EC in charge of Enlargement and European Neighborhood Policy.

"The measures also commit Turkey to address changes to the current high thresholds for representation in Parliament and to open up state financing of political parties, which should increase pluralism. We also hope that the announcement of a law on data protection will facilitate EU/Turkey cooperation in different areas. We look forward to progress on these matters, including the full engagement of the opposition parties."

Calling the package "modest progress on democracy in Turkey," Andrew Duff, a liberal member of the European Parliament, was in a more critical than praising mood.

"For the Kurds, it is welcome that private schools may teach courses in the mother tongue, but as long as the Article 42 remains in Turkey's constitution, the effects will be limited. The return of three letters of the Kurdish alphabet (q, w and x) and the re-naming of Kurdish towns will be welcome.

"More information is needed about the government's intentions on lowering the electoral threshold. It is a pity that Mr. Erdogan again misses the opportunity to reform the anti-terror law, and that no amnesty is offered to political prisoners, many of them journalists.

"There is nothing for the Alevis except changing the name of a university: The emancipation of the Alevis in Turkey remains unfinished business. The Syriac Church will rejoice at regaining the property rights of the Mor Gabriel monastery. But the Greek Church has still to wait for the return of the Halki seminary."

For the non-Muslims, the package seems to be anti-climax. Syriac-language Sabro newspaper Editor-in-Chief Tuma Çelik told daily Today's Zaman that  "‘returning' Mor Gabriel monastery, as if it ever belonged to the state, is wrong. The land on which Mor Gabriel is situated already belonged to the Syriac foundation. They just did the right thing."

The return of the Mor Gabriel Monastery could have after all relieved the Syriac Church, but the real disappointment was felt, according to reactions, on the issue of opening of Halki Seminary of the Ecumenical Orthodox Church, which did not figure in the package.

Metropolitan of Bursa Elpidophoros Lambriniadis told Today's Zaman: "We are hugely disappointed. We were really hopeful [as the Greek Patriarchate]. This is not what we were expecting from the government." Laki Vingas, the elected representative of non-Muslim foundations at the Council of the General Assembly of the Directorate General for Foundations (VGM), said: "The minority issue could have been more actively dealt with."

Like Halki Seminary, the package fell short of measures on Alevi minority demands, which caused bitter remarks. Sabahat Akkiraz, a CHP Istanbul deputy, and a prominent Alevi, has criticized the government for not granting Alevis the rights of other citizens, as Alevis and cemevis are not mentioned in the package. "The government is trying to make fools of Alevis by only changing the name of a university to Hacıbektaş," she said.

Ali Balkız, a leader of the Alevi community, issued a statement: "The mountain gave birth to a mole hill. Actually, not even that. Nothing was mentioned about the cemevi (Alevi house of prayer). There is nothing new about (compulsory) courses on religion (which Alevis reject) and about the (exclusively Sunni) Directorate of Religious Affairs."

The Roman community seemed also disappointed. The author at the website cingeneyiz.org, Ali Mezarcıoğlu, argued that the proposal on opening an Institute for Studies on Romas was nothing new. "There is already an institute in Aydın University," he said. "Eleven meetings were held. But there is no infrastructure."

The reactions were bitter among the Kurds, a key segment for the Turkey’s democratic progress. A BDP deputy, Ertuğrul Kürkçü, said, "Same old, same old." At the BDP's Diyarbakır headquarters, people told daily Today’s Zaman that their demands were not included in the reforms.

BDP Co-Chairman Gülten Kışanak said the government's proposals will not help the settlement aimed at ending the conflict between the Kurdistan Workers' Party (PKK) and the state. She said the package does not address the need for democratization, broader freedoms and rights, solutions to problems and an acceptance of citizens as they are.

She added that the reform package has no "capability to solve the problems" or tackle the stalemate in the settlement process. Saying that there are still thousands of political prisoners in jails, Kışanak said the package was drafted to meet the needs of the AK Party, not the people, "a package falling short of calling an Alevi an Alevi, a Kurd a Kurd."

"It is not a democratization package; it is an election package," she concluded.

Although the Kemalist and nationalist opposition parties were routinely categorical in rejection of Erdoğan’s menu of reforms, his loud declaration today will surely add fuel to the ongoing debate on Turkey’s thorny path.

Observers in the liberal segments of domestic media were keen on underlining the positive elements (such as lifting the nationalist oath in schools, granting villages their original names, Kurdish education in private schools and lifting the ban on headscarves in public service, etc.). But the question remains how the package will effect the course of the Kurdish Process and the overall tone of the Progress Report on Turkey, due very soon in Brussels.