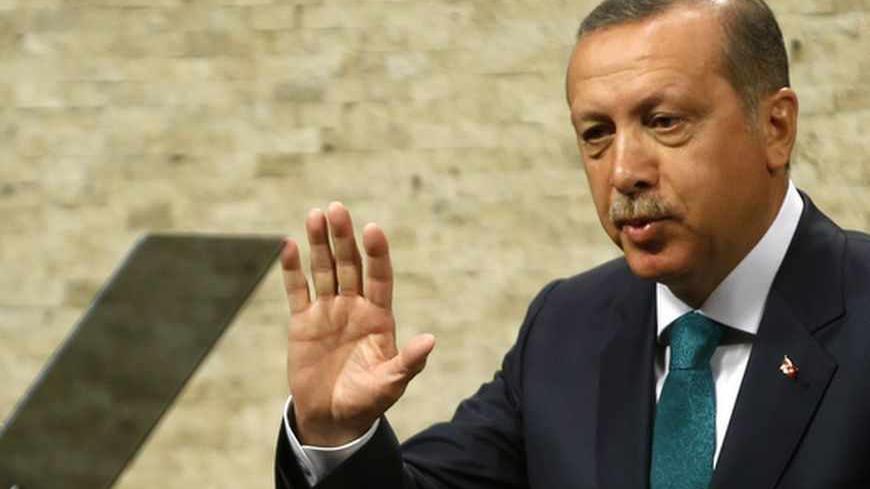 He said the announcement of the package was a "historic moment for Turkey." He sent a message to the Kurdistan Workers’ Party (PKK) and the Kurdish movement by saying that new reforms will follow as long as politics are used as a means of solving issues.

In his talk, Erdogan frequently referred to the 1960 military coup. He said that the coup had broken the mechanism of a well-functioning democracy, and that the shadow of that coup has obstructed change in Turkey since. This was an indirect allusion to the Gezi protests. The 1960 military coup followed intensive protests by university students, secular and urbanized segments of the population — a bit similar to the makeup of the Gezi Park protests.

What was noticed immediately was the absence of two important reforms that were expected in the package. Recognition of Alevi places of worship was not mentioned. The only gesture toward Alevis was the renaming of Nevsehir University to Haci Bektasi Veli University, honoring a historically important Alevi figure.

Also missing was the reopening of the Halki Seminary. Reopening this school is vital for the survival of the Greek Ecumenical Patriarchate of Istanbul. Unless this school reopens and starts accepting students from all over, it will be impossible to find and train new bishops and religious officials for the mostly aging Greek population of 3,000 in Turkey.

To better understand the reforms introduced, it will be useful look at them under subtitles:

Reforms related to the Kurdish issue: The current 10% election threshold will be discussed in parliament. Three options will be offered. It could stay as is, be reduced to 5% or be totally eliminated by introducing a majoritarian election system. It will be the pro-Kurdish Peace and Democracy Party (BDP) that will most gain from abolishing the threshold. Although they cannot reach the threshold on a nationwide scale, they get the most votes in the Kurdish-populated southeast. With the threshold removed, BDP’s deputies would increase substantially. The package also would lower the percentage of votes needed to qualify for parties to get treasury assistance to 3%; this would provide treasury assistance to the BDP.

Having political party co-chairs would be legalized. Political parties would henceforth be allowed have not more than two co-chairs. This, too, is a step favoring the BDP, which is the only party with co-chairs. They would now be officially recognized.

By allowing election campaigns in different languages and dialects, the way would be open to now use Kurdish in political activity.

I asked the chairman of the Bar Association of Diyarbakir, attorney Tahir Elci, what he thought of the parts of the package pertaining to Kurds. He thinks it is a modest step toward democratization. He interpreted Erdogan’s remarks that the rights and reforms will be expanded as long as "politics prevail" as one way of saying, as long as the PKK disarms, we will take matching steps. But Elci also points out that the package does not include steps such as amnesty, which is a prerequisite for total disarmament.

According to Elci, the package doesn’t cover key steps needed to solve the Kurdish issue. The wide-ranging definitions of "terror" and "organization membership" that are the cause of the detentions of many Kurdish politicians and activists would remain, and legal provisions that enable mass detentions would stay unchanged. Limiting mother tongue education only to private schools is a big flaw, he said, noting that public schools had to be included.

Reforms related to minorities: Stiffer punishments for hate crimes would be added to penal codes. Turkey would have hate-crime legislation for the first time. But for which crimes stiffer punishment would be imposed is not known yet. Sexual orientation was omitted from hate crimes, which is a major flaw as it is LGBT persons who are subjected to most hate crimes.

The Council for Equality and to Combat Discrimination would be established. Although it sounds good, it is too early to see the purpose it would serve before it becomes active. Let’s not forget how the hopes for the ombudsman system introduced by the Justice and Development Party (AKP) government withered away when a judge who had once sentenced Turkish-Armenian journalist Hrant Dink to prison for “insulting Turks” was appointed ombudsman.

The package provides for the return of confiscated real estate property of the historical Mor Gabriel monastery in Mardin province. Earlier, the monastery’s property was confiscated by the state via a court decision. A law will be enacted so that all assets would be returned. No doubt this will reassure the Syriacs of Turkey. Erdogan said the process of returning the assets of the minority foundations will continue, but did not indicate any further steps envisaged.

One of the pleasant surprises of the package was the announcement that a Roma (Gypsy) language and cultural institute would be established. Erdogan said the new housing to be built for Romas in the framework of urban transformation projects would be designed to meet particular needs of Romas.

I asked Rober Koptas, the managing editor of weekly Turkish-Armenian newspaper Agos, what he felt about the arrangements for the minorities. Koptas said in general he felt the package was significant. "It would have been great if the ecumenical school was to reopen," he said, expressing his disappointment. He also found the lack of reference to the restoration of all confiscated assets of the non-Muslim foundations as a flaw. Bringing legal measures against hate crimes is important, but Koptas said he wants to wait and see. Absence of status for Alevi cemevis, or houses of worship, is also a defect, he said.

Other reforms: Restrictions on collecting charitable donations would be abolished, which would  benefit Muslim charities that had limitations on collecting donations; restriction on wearing head scarves by civil servants would be lifted except for the army, police and judiciary; and any action to prevent the practice of religious beliefs would be against the law.

by Murielle KASPRZAK and Joseph SCHMID | AFP | May 26, 2022
END_OF_DOCUMENT_TOKEN_TO_BE_REPLACED