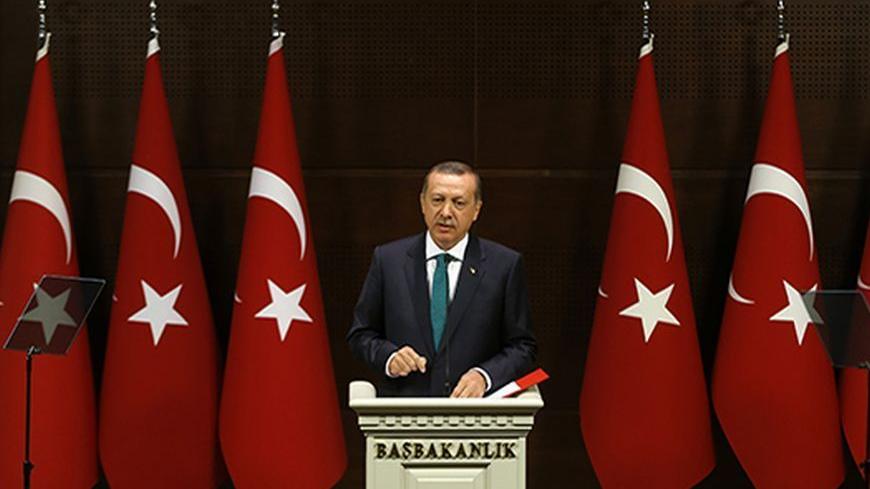 Previously in Al-Monitor, I wrote that Turkish Prime Minister Recep Tayyip Erdogan was excited about the democratization package on which he was working, after having spoken to him and observing his enthusiasm. He referred to the reforms as a "silent revolution" and said that more would follow. Erdogan also shared his view that freedoms and justice are essential if one hopes to create a great state. He repeatedly said that Turkey cannot be such a country unless it becomes a state of law. Erdogan began the silent revolution on Sept. 30. A summary of its salient points follows.

The Law on Private Education will be amended to allow mother tongue education in private schools, led by Kurdish. A constitutional amendment is required to permit education in a mother tongue in state-supported schools, but the government does not have the parliamentary majority needed to pass such a measure. For now, anyone can open a school and offer courses taught in the Kurdish language. Education in Kurdish is one of the most important issues among the reforms.

Women are allowed to wear head scarves in public offices, but the prohibition remains for the military, police force and judiciary. This is a big step for Turkey, but why is it not applied universally?

The Mor Gabriel Orthodox monastery at Mardin-Midyat will be granted official status and turned over to the Syriac community. Previously, Syriacs were not recognized as a minority and therefore were excluded from exercising the rights granted to non-Muslim minorities.

The penalty of imprisonment will be lifted on the use of W, Q and X — letters used widely in Kurdish. They have been excluded from keyboards, and violation of their use has been punishable by two to six months in jail. The abolition of the punishment circumvents the need for a constitutional amendment.

Options for an election threshold

The reforms offer three options for the electoral system, which will be decided based on public support and political parties' preferences: a majoritarian system with the current 10% threshold lowered to 5%; retention of the current system; or a majoritarian system that would divide Turkey into 550 electoral districts and eliminate election thresholds. Erdogan is thought to favor the last option.

Political parties will only need to obtain 3% of the vote to qualify for state financial assistance. The current requirement is 7%.

The pre-1980 names of locations will be restored. For example, the name of Dersim province, which was changed to Tunceli in 1934 after the massacre of Kurdish Alevis there, will be reinstated.

Legal barriers impeding the return of minority foundations' assets are to be removed. The assets of Greeks and Armenians were confiscated by a decree passed by the Republican People's Party in 1936. A later decree, passed in 2011, enabled the return of these assets to foundations. Although $2.5 billion in assets has been returned, this is considered inadequate because of legal barriers.

Nevsehir University will be renamed after the prominent Alevi spiritual leader Haci Bektas Veli. The change is part of an effort at an opening with Alevis.

The pledge of allegiance to Turkey and to being a Turk will be prohibited.

Alongside the many positive steps toward the democratization of Turkey included in Erdogan's package, a few crucial ones were omitted. First, the reopening of the Heybeliada Ecumenical Seminary was removed from the package at the last minute. A senior official of the Justice and Development Party (AKP), told Al-Monitor that this will be addressed at a later date. This is not right. The school should have been opened immediately. The AKP official asserted that Erdogan will reopen the school because he insists on equality for Turkey's non-Muslims.

The second major flaw is the absence of measures regarding the rights and freedoms of Alevis, that is, official status for cemevis (houses of prayer and community gatherings) and official positions for dedes (religious leaders). It is said that these measures will soon be added to the government’s agenda.

The proposed democratization package is crucial despite its flaws and omissions. As Erdogan has said, if Turkey wants to be an influential and respected member in world politics, it must be a true state of law in which all its citizens are free and treated equally. Without a robust liberal democracy, the liberal economy will also lag, impeding growth. Turkey has to be a free and democratic country to be considered great and prosperous. Erdogan the politician is well aware of this.

Rasim Ozan Kutahyali has been a columnist for Sabah since 2011, after writing for Taraf from 2008 to 2011. He is a popular political commentator on various TV programs, having started at CNN Turk and now appearing on Beyaz TV. Kutahyali is known for his anti-militarist and liberal political views. He can be reached at rasim.ozan@hotmail.com.