Turkey’s new liberalization package for its largest religious minority is linked to Syria. 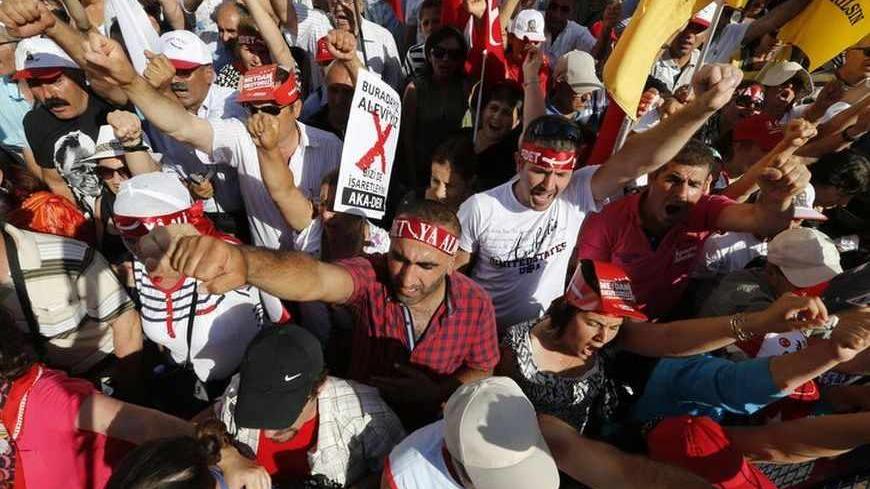 Everyone in Turkey agrees that one of the most vital issues facing the country is the situation of Alevis. It is a top-priority societal issue that has to be handled with urgency.

Alevis constitute the country's largest minority, estimated between 12 and 15 million people. Given Turkey’s population of 76 million, this is a significant number. In short, Alevis are generally considered to be a part of Islam, with a syncretic and esoteric belief system that has incorporated many pre-Islam tenets of Anatolia. Only a tiny minority of Alevis see themselves outside of Islam. Although some of the beliefs of the Anatolian Alevis resemble doctrines of Shiite Islam, their roots are not the same. Almost none of the tenets of Sharia are accepted by Alevis. Recognized as a branch of Shiism, Arab Alawites in southern Turkey are known as Nusayris. Almost all of Turkish Nusayris have relatives in Syria. In today’s Turkey, when we say Alevis, it covers all the Turkish, Kurdish and Arab Alawites.

Turkey experienced violent Alevi-Sunni clashes in its recent history. The "deep state" actors now being tried in the Ergenekon coup-plotting case were accused of organizing the Alevi massacres. The 1938 Dersim massacre was organized directly by the Kemalist regime. Single-party rule of the Republican People's Party (CHP) collectively massacred Kurdish Alevis in the Dersim region that they had marked as "potential terrorists."

It is still debated whether the order for the massacre was ordered by then-President Mustafa Kemal Ataturk or the CHP’s second man Ismet Inonu. Generally, Inonu is accused, but we have to remember that Ataturk is still the grand taboo of Turkey, immune to criticism. That is why Turkey’s liberals and conservatives declared Inonu the scapegoat. Strangely, the CHP, which carried out the Dersim massacre, is today led by Kemal Kilicdaroglu, himself a Kurdish Alevi from Dersim.

Although the CHP’s policies of rejection, denial and assimilation of Alevis are obvious, the majority of Alevis still vote for CHP out of fear of Sunni Islam. The majority of Kurdish Alevis support the Peace and Democracy Party (BDP), which is the political arm of the Kurdistan Workers Party (PKK). The record of Turkish right-wing parties in the context of assimilation policies targeting Alevis is pathetic. Turkey’s official Sunni religious institution, the Department of Religious Affairs (DRA) had until now systematically marginalized Alevis.

The Islamist, democratic Justice and Development Party (AKP), which has ruled Turkey for the past 11 years, has constantly tried to show that it has a liberal approach to the issue, different from right-wing parties of the past. But, in general, the AKP’s efforts have failed. Many workshops were organized to determine the problems of the Alevis. The Madimak Hotel of Sivas, where Alevis were massacred in 1993, was taken over by the state to be turned into the "Museum of Humanity," and an objective lesson on Alevis was added to high school curriculum. But all these attempts only meet a tiny segment of Alevi demands. Before everything else, Alevis want the re-organization of the state’s official religious authority since they no longer want to be marginalized by the state and society.

Last week, a momentous event occurred. According to an article by Mehmet Ali Berber in the daily Sabah, a report on Alevis that will have a part in the democratization package under preparation was submitted to Prime Minister Recep Tayyip Erdogan. Amazingly, this truly progressive and liberal report that embodied revolutionary proposals was submitted by the DRA. The report asks for equal rights for Alevis while analyzing what can be done to respond to Alevi issues and demands. The DRA mentioned that meeting the needs of a "cemevi,"  an Alevi house of worship, and alloting funds to Alevi religious leaders, or "dedes," will not be enough to solve the problems and proposed a more comprehensive reform.

To this end, the report suggested establishing an organization parallel to the DRA to meet Alevi needs so that they can freely practice their faith in peace. Such a department would have an independent budget. The DRA wants to put an end to the debate on whether a cemevi can be recognized as house of worship, and declared, "Nobody has the right to define what a house of worship is."

Here are some of the DRA proposals:

1. A Religious Affairs Higher Council should be set up either as a ministry or attached to a deputy prime minister.

2. DRA should be under this council. Alevis, too, should be linked to the this council with a similar arrangement. Alevis will then have say in decision-making about their affairs and will have a body to meet their needs and solve their problems.

3. All cemevis and dedes should be attached to this body. Like imams, muezzins and muftis today, dedes too should be public servants.

4. The problems of Alevis go far beyond electricity, water or financial assistance to cemevis and dedes. The new body should determine all problems and offer remedies.

5. The Alevi body should be provided with proportionate resources from the budget of the new council. It should meet all its needs from its own budget.

7. The proposed Religious Affairs Higher Council should strive to find solutions to the needs of all other minorities [Christians and Jews]. The council should be an active entity that seeks to eliminate all problems related to freedoms of belief and worship.

Turkey’s current head of religious affairs, Mehmet Gormez, known to have liberal views, personally delivered the report to Prime Minister Erdogan. The prime minister was reported to be favorable to the proposals.

Meanwhile, Fethullah Gulen, recognized as the most influential and powerful figure of the Turkish Sunni Islam Movement, also came up with a major iconoclastic project. Gulen made an accord with the most powerful spiritual leader of Turkish Alevis, Izzettin Dogan, and decided to build a giant combined mosque-cemevi in Ankara. They will be adjacent in the same plot of land, according to the project.

For Alevis who until yesterday were considered a "heretical sect" to be now recognized at higher levels is very important for Turkey. Many political analysts say these moves have gained momentum because of the Syrian crisis. Such reasoning cannot be challenged, as Turkey has seen the necessity of ensuring Alevi-Sunni unity in the case of a Turkey-Syria conflict. No matter the motive, developments to solve the issues of democratic rights and freedoms for the largest religious minority of the country are indeed promising.

Rasim Ozan Kutahyali has been a columnist for Sabah since 2011 after writing for Taraf from 2008 to 2011. He is a popular political commentator on various TV programs, having started at CNNTurk and now appearing on Beyaz TV. Kutahyali is known for his anti-militarist and liberal political views. He can be reached at rasim.ozan@hotmail.com