The government of Turkish Prime Minister Recep Tayyip Erdogan is seeking to heal old wounds with Turkey’s Alevi community, while stepping back from sectarian regional policies. 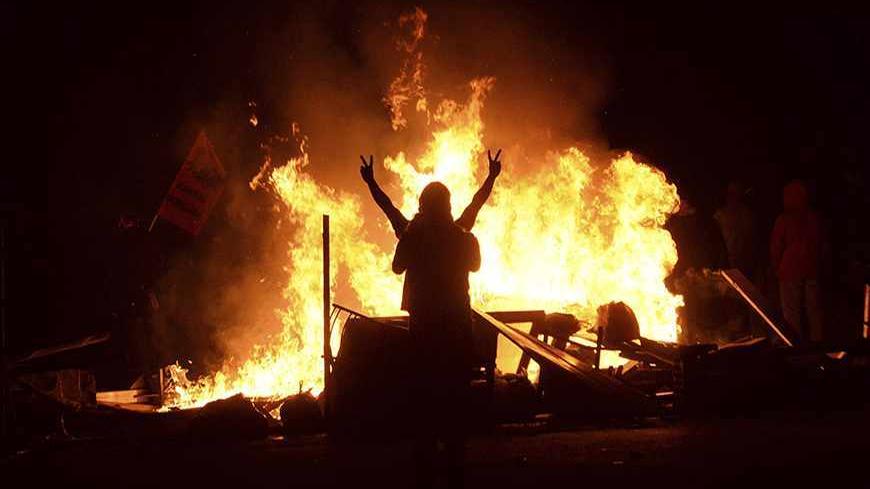 A demonstrator gestures as he stands behind burning barricades during a protest against a religious complex that would include a mosque and an Alevi cemevi in the Tuzlucayir neighborhood of Ankara, Sept. 9, 2013. - REUTERS

Some Alevi organizations have welcomed these efforts by the government, which President Abdullah Gul has also been contributing to. But not all are convinced of their sincerity and, given past disappointments, appear justified.

Turkey’s Alevi problem cuts deep — having a bloody history — and has resulted in tragic events in recent times. One tragic case was the “Kahramanmaras incidents” in 1978, when more than 100 Alevis — mostly poor Kurds, including women and children — were massacred by a politically manipulated nationalist Sunni rabble.

Another equally tragic incident occurred more recently on July 2, 1993, when 35 representatives of the Alevi intelligentsia were burned alive when another incensed Sunni rabble set fire to the Madimak Hotel in the city of Sivas during a cultural event.

The Erdogan's government is not innocent in this respect either. Ankara’s overtly pro-Sunni approach to the Syrian crisis, and its initial support for the al-Qaeda-affiliated groups in that country, for example, fueled the fears of Turkey’s Alevis — whether they are of Turkmen, Arab or Kurdish origin.

When Erdogan came out, shortly after the deadly car bomb attack in the border town of Reyhanli in May —which was blamed on pro-Syrian President Bashar al-Assad elements — saying, “Fifty-three Sunni citizens were martyred in Reyhanli,” this only increased Alevi fears.

It was the first time victims of a terrorist attack in Turkey were referred to by their sect by Erdogan, or anyone else in high office. Many Alevis, especially in regions bordering Syria, braced themselves for a major Sunni backlash after this remark, which fortunately did not come, despite minor incidents.

Syrian Alawite refugees, who are relatives of Turkey’s Alevis, also share similar concerns. In her piece for Al-Monitor's Turkey Pulse, Pinar Tremblay explained their plight. She provides eyewitness accounts of why they were in Turkey reluctantly, having nowhere else to go, and why once in Turkey they only trust their Alevi co-religionists, rather than the Turkish state.

But as Fatima Ayub indicates in her introduction to a new report by the European Council on Foreign Relations on sectarianism in the Gulf, Syria is not only “unravelling into an ever more divisive and brutal internecine conflict,” but matters in the region generally are coming to a head because of the Syrian conflict, and “casting the moment as the onset of a new Thirty Years’ War.”

The Syrian crisis has defied all the plans and expectations of Erdogan and Foreign Minister Ahmet Davutoglu, and the sectarianism this has unleashed today poses a threat to all countries in the region. Ankara has therefore been forced back into the nonsectarian middle ground, from where it has started courting Shiites, starting with Iraq.

Davutoglu’s recent and unprecedented visit to the holy cities of Najaf and Karbala, and his high profile meetings with Shiite cleric in Iraq Ali al-Husseini al-Sistani and Shiite cleric and leader Muqtada al-Sadr, were major icebreakers between the Erdogan government and Iraq’s Shiite community.

Davutoglu tried to reassure his interlocutors in Najaf that Turkey did not support any sect, and merely wanted peace, stability and democracy in the region. Fine as these words are, many are asking why it took Ankara so long to reach out to Shiites in this way when it could have played a positive role much earlier to help reduce sectarian tensions.

Neither is this being asked only in connection with Syria, because the government of Nouri al-Maliki in Iraq started blaming Ankara of supporting Iraq’s minority Sunnis against the Shiite majority before the crisis in Syria broke out.

Ankara has always denied Maliki’s claim, saying it is only supporting democracy in Iraq, where the predominantly Shiite government is discriminating against non-Shiite groups. Despite this denial, it did not reach out to Iraqi Shiites in the past the way it does now.

Iraq, however, is one of the countries most affected by increasing sectarian violence and Maliki has also come around, like Erdogan, to realizing the dangers to national security this poses. It, too, is therefore keen on rapprochement with Turkey, especially if this helps bridge the gulf between Sunnis and Shiites.

Ankara’s reaching out to Shiites is also expected to have positive effects with regard to the Alevis, whose origins also lie in Shiite Islam. This is particularly the case now that the Erdogan government appears to have understood the security threats involved in supporting radical Sunni groups in Syria against the predominantly Alawite government of Assad.

Meanwhile, Gul is doing his share to pitch in and help the Alevi-Sunni reconciliation. The latest example of this took place during his visit to the city of Erzincan on Nov. 15, where he met with Alevi elders in a cemevi, the Alevi house of worship.

"This country belongs to us all. Our grandfathers, just as their grandfathers, lived together here. Therefore, everything can only be for the better as long as we treat each other with respect, love and remain in dialogue,” Gul told the elders, in the presence of the media, and his remark appeared to be appreciated.

One of the principal grievances the Alevis have is the refusal by the government thus far to grant legal status to cemevis as places of worship, and it remains to be seen if the meeting Gul had with the Alevi elders in Erzincan will help open the path for this.

Some of the steps taken by the government with a view to reaching out to the Alevi community have also been welcomed by various Alevi organizations. The most prominent of these is the Cem Foundation (Cem Vakfi) headed by Izzettin Dogan, a well-known Alevi leader and activist.

Dogan has also defended government supported projects such as the one inspired by the influential Turkish Sunni cleric Fetullah Gulen, who lives in the United States, for a religious complex in Ankara that houses a mosque and a cemevi so that Sunnis and Alevis can pray in adjoining houses of worship.

Dogan is critical of Alevis who consider this project and others like it to be cosmetic, and aimed at appeasing Alevis without meeting their main demands such as legal status for cemevis and equal representation in the overbearingly Sunni Directorate for Religious Affairs.

Those who oppose Dogan, and some accuse him of “selling out,” also point out that the government’s much touted “democratization package,” announced by Erdogan in September, met few Alevi demands, although it included major steps to enhance Sunni rights. A case in point is the permission of Islamic headscarves for women in the public sector, except the military and judiciary.

Deputy Prime Minister Bekir Bozdag, a key Justice and Development Party (AKP) ideologue who is also spearheading the government’s so-called “Alevi opening,” said that it was wrong for Alevis to expect anything from that package because the government is working on a separate one for the Alevis.

Bozdag, who was addressing a meeting of the “Alevi-Sunni Brotherhood Platform” in Istanbul on the day that Gul was meeting with the Alevi elders in Erzincan, insisted they were doing their utmost to satisfy Alevi demands.

Not surprisingly, given past events, many Alevis take this with a pinch of salt and are maintaining an “I’ll believe it when I see it” stance. Escalating sectarian tensions in the region, and the risk that these may spill over into Turkey, however, could leave the Erdogan government with little choice but to meet most of the major Alevi demands.

Not doing so could prove to be costlier for Turkey’s Sunni establishment in the end, especially at a time when a “Thirty Years’ War,” to use Fatima Ayub’s analogy, seems to be brewing in the Middle East.