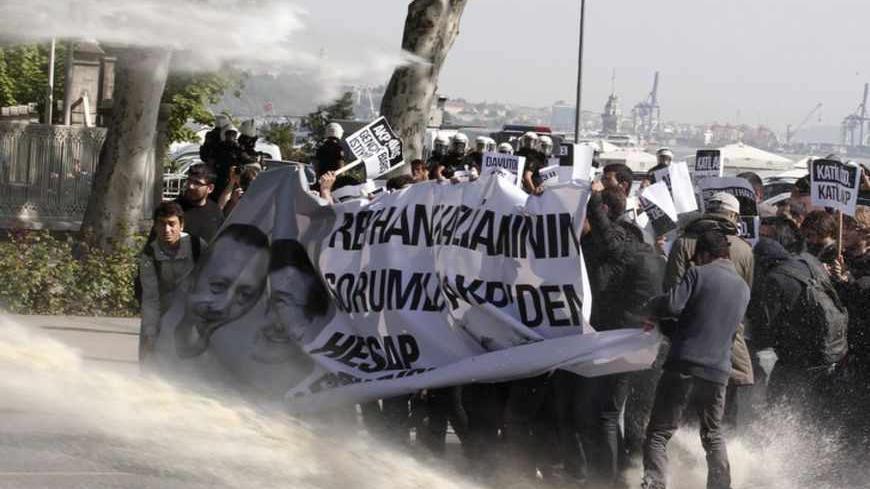 Protesters clash with riot police during a demonstration against Turkey's Prime Minister Recep Tayyip Erdogan and the Turkish government's foreign policy on Syria, in Istanbul, May 16, 2013. - REUTERS/Osman Orsal

In one of its worst repercussions on Turkey, the Syrian crisis swept away the dust that covered the sectarian cracks in the depths of Turkish society and politics. Up until Prime Minister Recep Tayyip Erdogan marked his Syria policy with an emphasis on Damascus being a “Nusayri minority regime,” the question of whether the Justice and Development Party (AKP) government was shaping a pro-Sunni foreign policy had been raised only timidly. The general outlook of Turkish foreign policy suggested equal dialogue with all parties without sectarian discrimination.

Things, however, changed as Ankara leapt from the spot of an impartial mediator/facilitator to the position of a “playmaker.” In post-occupation Iraq, for instance, Turkey sought to influence the process via Sunni channels, which were the easiest to penetrate. This was understandable to a certain extent as things had not yet settled down. But sectarian sensitivities swelled in the government-formation process following the 2010 polls as Turkey threw its weight behind the Sunni bloc. When the US pulled out from Iraq on Dec. 31, 2011, the swelling capsule burst.

From that point on, Iraqi Prime Minister Nouri al-Maliki was hardly ever mentioned in Turkey without the “Shiite” epithet.

Maliki’s accusations of Turkish interference in Iraqi affairs were blamed on sectarian bigotry. But in Baghdad’s eyes, Turkey’s ambitions of Sunni patronage had reached a scale that put Iraq’s integrity at risk. Maliki went as far as to complain about Turkey at the UN.

As Iraq joined Iran in the opposite camp in Syria, the sectarian dichotomy became the main factor in Ankara-Baghdad tensions. In the meantime, Erdogan began to mention the Syria break-up scenario for Iraq, too. On Dec. 22, 2012, he made striking remarks on NTV television: “The unrest in Iraq could be mirrored in Syria as serious sectarian differences exist there, too. Iraq’s central administration is a minority government. But because of the support it gets for being Shiite, it brutalizes its own people.”

Baghdad did not mince its words either. In response to Erdogan, Iraqi lawmaker Kamal Saidi said: “Erdogan is no longer able to control his sectarian impulse. He thinks he is the leader of the region. Has anyone ever appointed Erdogan as the custodian of Iraq? Does he think he is a sultan ruling Iraq? He wants to reverse history, but that’s impossible. If Erdogan intends to drag the region into a sectarian war, he must know he will also be burnt in the fire since his own nation, too, is one of diverse segments.”

In remarks on Feb. 24, 2013, Erdogan appeared to nourish dreams of an autonomous Sunni region. “If you speak of a transition to a federal system, why don’t you consider the same system for Sulaimaniyah, Kirkuk or Mosul, too? We have suggested a special status for Kirkuk, and the same for Mosul and Sulaimaniyah. But they agree to none of these. Yet, sooner or later, this will also become a reality,” he said.

The Mideast sectarian dichotomy, with Turkey on one side and Iran on the other, was best illustrated in the autumn of 2010 when Iranian President Mahmoud Ahmedinejad and Erdogan visited Lebanon one month apart. Ahmedinejad rallied the Shiites, Erdogan the Sunnis. Even though Erdogan saluted Hezbollah by condemning Israel’s 2006 offensive, he came to be perceived as a leader aspiring for Sunni patronage.

The Syrian crisis further exposed the sectarian rhetoric. Turkish officials began to call the Syrian Alawites “Nusayri,” to distinguish them from Turkey’s Arab Alawites, and they persistently described Damascus as a “Nusayri minority regime,” framing support from Iran, Iraq and Hezbollah to Syria as “Shiite solidarity.”

In Sept. 2011, AKP Deputy Chairman Huseyin Celik targeted main opposition leader Kemal Kilicdaroglu, an Alevi. “The Baath regime relies on a 15% portion [of Syrians]. Is it perhaps a solidarity out of sectarian affinity that leads Kilicdaroglu to defend Syria?” Celik said. The sectarian tilt hit a serious sliding point when Deputy Prime Minister Bekir Bozdag, commenting on Hezbollah’s involvement in the Qusair battle, said that Hezbollah, which means "Party of God" in Arabic, should rather call itself “Hezb al-Shaitan,” or “Party of Satan.” What’s more, he made the remarks at a symposium on “Islamic unity,” attended by foreign Muslim scholars.

Things grew even rougher as the spirit of Sultan Selim The Grim reverberated from foreign policy into domestic politics. Naming the prospective third Bosphorus bridge after the sultan was a message not only to the Alevis but also to Iran and Syria. Even though Erdogan keeps repeating that “we should cast out those fomenting sectarianism,” naming the bridge after The Grim fuelled the anger of Alevis, already irked by the way Turkey intervened in Syria. The Alevi wound had previously been re-opened amid a series of incidents such as the marking of Alevi homes in Adiyaman, Izmir and Gaziantep, and a wall graffiti in Erzincan threatening to “burn all infidel Alevis."

On top of places like Hatay, which are populated by Arab Alawites, Istanbul’s Alevi-majority Gazi neighborhood was already in a state of a low-intensity revolt on June 14, when Erdogan rubbed salt in the wound. In a speech at a party function, he said the May 11 bombings in Reyhanli had “martyred 53 Sunni citizens of ours” — the first time a prime minister highlighted the Sunni majority in such a context.

On June 18, President Abdullah Gul acknowledged “sensitivities” over the bridge’s name and suggested that “another big public project be named after Haji Bektash Veli or Pir Sultan Abdal.” But with no backing down on the bridge name, his remarks failed to stifle the anger. The most striking warning came from the leader of the Gulen community, Fethullah Gulen. “Efforts are under way to build bridges between us, to have a mosque and a cemevi [Alevi house of worship] built next to each other in a park, so that old problems are not resurrected to foment new enmities. Let’s not tear down the many bridges that could bring us together for the sake of one bridge’s name,” Gulen said. Naturally, he won kudos.

Ayfer Karakaya-Stump, assistant professor of history at the College of William & Mary, analyzed the government’s motives for Al-Monitor:

“After the Syrian crisis broke, Turkey abandoned its position as an impartial mediator and redefined its regional role, taking the side of the Sunni bloc against the Shiite crescent. It aspired to become the leader of the Sunni world like the Ottomans were. The shift was driven by hopes for good ties with and economic benefits from the Sunni regimes that would take the reins in the post-Arab Spring era, the pressure of Gulf states providing 'hot money' to the Turkish economy, and the US-Israeli misgivings over Iran.

"Domestic politics, however, were marked mostly by continuity, despite quantitative changes. While struggling against the military tutelage, the AKP, too, ostracized the Alevis. The rhetoric went as far as to rewrite Republican history around a theme that 'an Alevi-controlled secularist establishment has oppressed the Muslim people.'

"The government’s resorting to sectarian language began during the 2010 [constitutional] referendum. That was the first stage, aimed at consolidating support by stirring Alevi-phobic impulses. The second stage came with the Syrian crisis. Erdogan’s sectarian rhetoric became high-key, marking also a turning point at home. The motive was again to stir Alevi-phobia in order to drum up public support for the interventionist Syria policy," Karakaya-Stump stated.

"Erdogan always used anti-Alevi rhetoric, in varying degrees, when he needed Sunni support on tough issues. The sectarian rhetoric increased with the Syrian crisis and took on an international dimension. The sectarian rhetoric was useful to a certain degree in the campaign against the military and the judiciary, but has so far failed on Syria. The bridge name and the ‘Sunni martyrs’ in Reyhanli are messages sent to Sunni grassroots by an AKP blundering both at home and abroad.”

The sharp rhetoric — meant to heal the crack in the Sunni base, where the foreign policy debacles have come under scrutiny — may be reassuring for Erdogan, but untold neighborhood stories of Alevi-Sunni confrontation are growing. And that’s the real danger for Turkey.