Tensions in Reyhanli mirror Turkish Alevis' frustrations over their unmet demands for recognition. 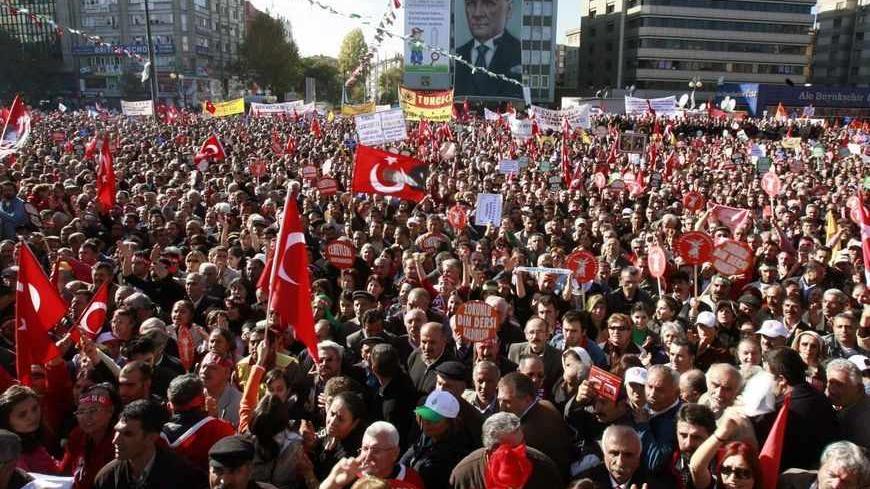 Saturday's bombing in Reyhanli may have re-exposed a fault line with Turkey's Alevis. Here, thousands of Alevis marched in Ankara in their first massive demonstration to call for an end to discrimination by the government on Nov. 9, 2008. - REUTERS/Umit Bektas

The harm inflicted on Turkey by the nearly one ton of explosives detonated in the terrorist attack in Reyhanli indicates a political motive well beyond the 51 dead, scores wounded and 293 homes, 62 cars and 452 offices damaged. A professional job that evokes the uncertain future of the horror in Syria, the attack has widened one of Turkey’s open fault lines.

Prime Minister Recep Tayyip Erdogan is confident about who the perpetrator is. “The [Syrian] regime is behind this. It’s obvious,” he said over the weekend. “Certainly, there are people among us who provide them support — in political terms, too. … There are attempts to drag us into a sectarian conflict. We see their extensions, too.”

Main opposition Republican People’s Party (CHP) Chairman Kemal Kilicdaroglu urged Sunnis and Alevis on Monday “not to fall into the trap” when he visited Reyhanli, in Hatay province on the Syrian border.

Their conclusions may be similar, but Turkey’s two arch-rival political actors see that the terror attack, the deadliest in the country’s history, has exposed the most fragile side of the social fabric.

Yes, the bombs did demonstrate that Reyhanli, where well over half of the population is Arab, 8% Circassian, 5% Kurdish and the remaining 20% to 25% Turkish, has become a field laboratory for terrorism.

At a time when Turkey is seeking to reconcile with its more than 15 million Kurds, some see the attack as a warning to Ankara that it will be drawn “into the regional quagmire and a civil war via a Sunni-Alevi conflict.” They may not be mistaken.

A major dichotomy in Turkish politics is between the Sunni identity, represented by the ruling Justice and Development Party (AKP), and Alevism, which holds a significant share in the electoral support for the Kemalist CHP.

Turkey’s Alevis are not exactly the same with Syria’s Nusayris [Alawites], but their worries and exasperation are growing as the Syrian conflict worsens. The anxiety over Syria is piling on top of frustration over what they see as their unmet demands in Turkey.

Strangely, the Reyhanli bombs coincided with the third national convention of the Alevis, who make 6% to 9% of Turkey’s population (4 million to 7 million), according to matching results from surveys by the KONDA polling company and the liberal think-tank TESEV.

The speeches at the convention, attended by 584 Alevi associations, illustrated the grave consequences of political failure to meet Alevi demands raised persistently over the past 10 years.

The final communique of the convention said: “It is already obvious the AKP government is going to put the blame [of the bombings] on Alevis. We are smart enough to understand the meaning of efforts to associate Alevis with terrorism, of allegations that PKK’s Alevi factions are seeking to undermine the peace process, of linking the hatred nurtured against Alevis in the Syrian context with the Kurdish context, and the emphasis put suddenly on the Alevi origin of some senior PKK figures.”

According to one survey, oppression and violations targeting Alevis have doubled over the past two years. Prominent CHP member Atilla Kart claims about 700 people have been dismissed from the air force in recent months “only for being Alevi.”

The problems, however, run deeper and the accusations reflect chronic denial and assimilation. An overwhelming part of Turkey’s Alevis demand that Alevism be recognized as a distinct faith. An official recognition of their houses of worship, called cemevis, is a basic demand, but no progress has been achieved despite formal dialogue.

Moreover, a request by Alevi lawmakers for a cemevi in parliament has been rudely turned down. The rejection could have hardly been more offending and exasperating for it came with a “fatwa” by the homogeneously Sunni Religious Affairs Directorate (Diyanet), directing Alevis to Islamic worship and the mosque.

A senior AKP member, whom I pestered with insistent questions recently, offered the following explanation: “We cannot afford to become the Islamic movement that lets Alevism split from the fold as a separate faith. Voters would make the AKP pay a heavy price. We can never do that.”

This means that the oppression and perception of tutelage, which continues along the lines of religion, will accumulate more anger upon the existing fault lines.

The genie, though, is out of the bottle. The Alevi demands are not likely to vanish in thin air. Yet, it is hard to say that an effective and consistent political channel exists on Alevi behalf.

Alevis vote overwhelmingly for the CHP, barring the one-fourth Alevi portion of the Kurds which backs the Peace and Democracy Party, the PKK’s political wing. A notable factor in this propensity is that CHP leader Kilicdaroglu is also known as an Alevi. Many Alevis, however, mistrust the CHP with regard to reforms for minority groups and only reluctantly support the party.

The most serious issue exposed by the Reyhanli attack holds a mirror to Turkey’s long-standing fundamental constitutional problems. Had the AKP moved faster on Kurdish and Alevi demands during its 11-year rule, it would have influenced easier the rapid change in the region and been better protected.

The peace process with the Kurds is advancing well. But like a double-edged sword, the Alevi/Nusayri issue is twisting deeper in Syria and Turkey, threatening to further enlarge the wound.

In remarks to the Cumhuriyet daily, the head of the Alevi Culture Association, Dogan Demir, speaks of rumors that the Reyhanli attack will be followed by Alevi massacres, urges measures and adds: “The Alevi demands should be incorporated into the new constitution draft. Then we’ll know who is a friend.”

The Reyhanli attack has hardly fostered a united attitude between the AKP and the CHP. Polarizing rhetoric keeps them apart. While Hatay is boiling like a pressure cooker, the AKP underestimates radical Islamist groups and the CHP maintains sympathy for the Assad regime. This is not only disabling domestic politics but also exposing Turkey’s weak spots to external blows.