Is Turkey heading toward Alevi-Sunni clashes?

The most risky issue for Turkey is a potential Alevi-Sunni clash that requires the Erdogan government to urgently introduce an Alevi freedoms opening. 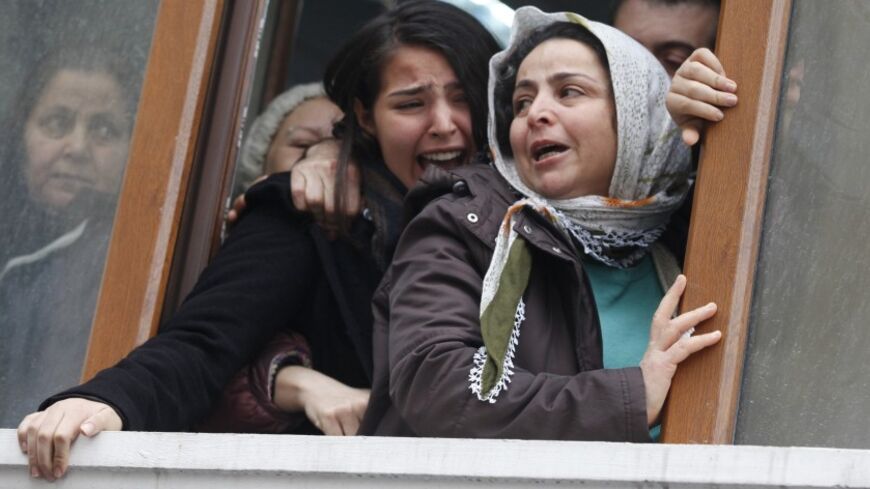 The last week has been very bitter for Turkey. First, Alevi youth Berkin Elvan, who was injured during last year's Gezi Park protests, died in the hospital. Then, Sunni youth Burakcan Karamanoglu was killed in an incident during the funeral ceremony for Berkin Elvan, and the extreme leftist terror organization Revolutionary People’s Liberation Party-Front (DHKP-C) claimed responsibility. Following these deaths, the Turkish media started to deliberate a potential Alevi-Sunni confrontation.

On the morning of March 12, when Elvan’s death was announced, I experienced an assault myself. DHKP-C militants recognized me and attacked my car with stones. I reacted quickly and got away, although my car was damaged. I might have been killed instead of Burakcan. The Turkish press reported the incident, but I declined offers of interviews so as not to personalize the matter during such a tense period. I am very sensitive to the Alevi issue. I have been forever struggling against Marxist-Leninist terror organizations that want to exploit the misfortunes of Alevis. Five years ago, I was assaulted by the extreme-right Alperen organization for saying on a TV program that the nationalists should apologize for the Alevi massacres of 80 years ago. I had to be hospitalized.

Because I am a journalist known to have always stood against the totalitarian ideologies of communists and fascists, both extremist groups hate me. In Turkey, it is routine for journalists to be assaulted.

But Al-Monitor readers outside of Turkey should understand that the Turkish media is in such a deplorable state that journalists who are assaulted are defended only by people who think like they do. Many people who think differently are actually pleased with such assaults. This is what happened in my case. That is why one has to be skeptical when reading Turkish journalists who portray themselves as victims. In general, Turkish journalists are part of dirty power games, where they either want to eliminate other colleagues from the media or wind up being kicked out themselves.

But let's return to the Alevi-Sunni issue that resurfaced on the national agenda after the deaths of the two youths. Turkey has lived through Alevi-Sunni street clashes before. Generally, the Alevis have been the victims of these clashes. The goal of the Kemalist regime that prevailed between 1923-2011 was to create a country made up of secularist, Sunni Turkish citizens. Turkey’s Alevis suffered under the Kemalist regime, just like the Kurds and the religious Sunnis. Alevis justifiably resisted the forced "Sunnification" policies of the state. This is the basic cause of Turkey’s Alevi issue.

Most Alevis lived secular lives. This was actually the ideal lifestyle the Turkish state wanted. But disrespect and distrust of Alevis was the heritage of the Ottoman Empire adapted by the Kemalist regime. In the Ottoman era, Alevis were always considered “deviants” and “rebels” who could rise against the state at any moment unless they were, from the outset, crushed. This is why the new republic’s first move was to apply extreme pressure on Alevi religious figures, as was done with Sunni religious notables. The Alevis’ dede — their religious leaders — were banned. Their beards were shaven off by force. The 1938 Dersim Uprising was an attempt to totally annihilate the Alevi population of that region.

The participation of Alevis in leftist movements after the 1960s enhanced the Turkish state’s paranoia regarding "communism danger." Any Alevi citizen was considered a "potential communist" and faced the consequences.

In the 1970s, Turkey lived through Alevi massacres in Corum, Malatya and Sivas organized by the "Stay Behind" structure of the Turkish state. At the beginning of the 1990s, two massacres followed at Sivas and Gazi. The Turkish "deep state" had two major goals in these massacres. The first was to intimidate the Alevis, who were seen as potential eternal threats. The second was to portray these massacres as the work of Sunnis, thus creating an atmosphere of Alevi-Sunni confrontation to fortify the deep state’s power. The Kemalist regime could not sustain itself otherwise. Kemalist elites could not govern this regime if Sunnis and Alevis were not at each other’s throats.

It is no wonder that this regime, while perceiving communism as the major threat and labeling each Alevi citizen as a “potential communist,” was also organizing the Sunni religious ranks against the Alevis. In the 1990s, the major threat became “Islamism,” and this time the Alevis were organized against the Sunnis. This was the basic strategy of the Kemalist regime.

Turkey's center-right parties have always had deplorable attitudes when it comes to Alevi rights. Islamists and nationalists have also behaved the same way. The Justice and Development Party (AKP) couldn’t overcome this tradition, thus making the Alevi issue one of the major failures of the AKP. After the coming elections, Turkey urgently needs an opening to the Alevis.

The rigors of Alevi-Sunni relations are also perceptible on the Nusayri-Sunni front along Turkey’s Syria border. Much was said about the causes and consequences of last year’s bomb attack in Reyhanli that killed more than 50 people — but for some reason there was almost no debate on the long-term major risks this attack entailed.

Turkey did not acknowledge the escalating danger of Syrian events provoking a Nusayri-Sunni clash in the country. This threat has a social and historical background that makes it essential for all parties to recognize the danger and devise confidence-building steps between the two sides before the tension gets out of hand.

As Rober Koptas, editor-in-chief of the Armenian language weekly Agos, wrote, Alevism in Turkey is a nonviolent, truly peaceful faith and culture. But the existence of a rebellious streak in secular Alevism that constitutes the popular base of leftist currents cannot be denied. This mindset, which has its roots in centuries-long oppression and has merged with the violent methods of 20th century revolutionary trends, has resulted in many Alevis first joining the Turkish left and then becoming founding cadres of the Kurdistan Workers Party (PKK).

Cengiz Candar, also a columnist for Al-Monitor, details the influence of the Ankara Group within the PKK on leader Abdullah Ocalan in a report prepared for TESEV (Turkish Economic and Social Studies Foundation) titled, “Coming Down from Mountains — How Does PKK Disarm?” Candar notes that the majority of the Ankara Group were minority Alevis from Turkey’s Kurdish population and that all of them had their roots in 1970s leftist university currents.

The effects of the Syria war in Hatay province, the uneasiness of our Nusayri population living in that area and its not-so-tolerant attitude toward the Syrian refugees fleeing to Turkey are realities. Especially in secularist circles, there is a conviction that the AKP is supporting jihadists in Syria. This conviction is shared by almost all Nusayris and most Anatolian Alevis. This belief naturally contributes to tensions.

Turkey’s leftists, who also include Alevis, have backed the Assad and Baath regime as anti-imperialist resistance. Facing them is our excessive Sunni sympathy for the anti-Assad uprising. It is not surprising that the Alevi-Sunni confrontation has reached a point where it is ready to explode. If some minor outfits were to resort to terror methods, it could further complicate the situation. This vulnerability could be manipulated by some countries wishing to see Turkey destabilized.

For all these reasons, one of the most vital tasks awaiting the AKP is to resolve the Alevi issue through extending freedoms and democracy, independent of the Syria issue. The AKP has to abandon its pro-Sunni policies. On the other hand, the main opposition Republican People’s Party (CHP), which is supported by the majority of Alevis, has to stop treating Alevi-Sunni tensions as a political advantage and refrain from further fanning the flames.

The most important risk facing Turkey’s stability today is the possibility of an Alevi-Sunni confrontation.