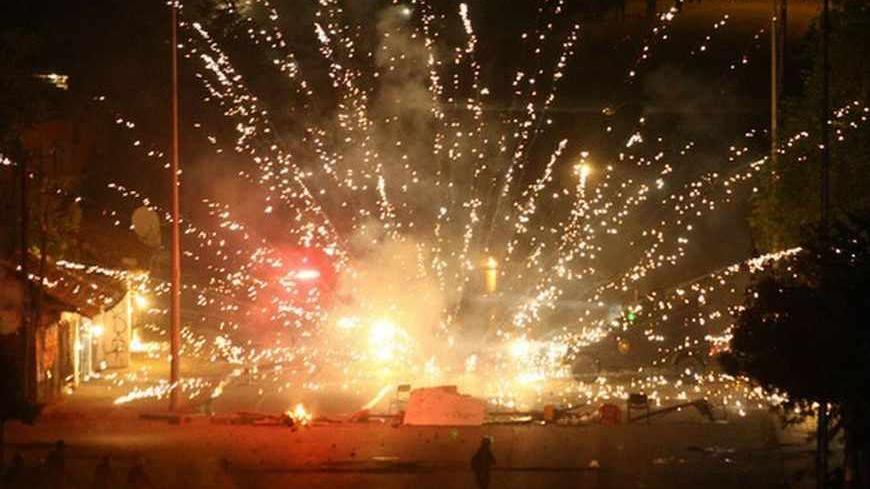 Turkish riot police are targeted with fireworks during a protest against a government project, the first ever cultural center containing an Alevi cemevi and a Sunni mosque side by side, in Tuzlucayir neighborhood of Ankara, Sept. 12, 2013 - ADEM ALTAN/AFP/Getty Images

The Sunni-Alevi divide has historically been one of Turkey’s most sensitive fault lines. It still has the potential to explode violently as a number of horrific experiences in recent history have shown. Prime Minister Recep Tayyip Erdogan’s Justice and Development Party (AKP) is said to be working to increase rights for Alevis. Press reports indicate that it will announce a “democratization package” soon which will incorporate steps to the benefit of Alevis.

In the meantime, the foundation for a building complex that will house a mosque and a “cemevi,” the Alevi house of worship, was ceremonially laid last week in Ankara.

The project is the brainchild of Fetullah Gulen, the influential Turkish imam who lives in self-exile in the United States, and who wields a strong hold over Turkish Sunnis.

The “mosque-cemevi project” is also supported by Izzettin Dogan, an influential leader of Turkey’s Alevis who number anywhere between 12 million and 15 million in a population of more than 75 million. Despite the good intentions that this project is attempting to reflect, and regardless that some Alevi organizations have welcomed it, a large number of Alevi organizations have refused to endorse it.

They maintain that this project is a shallow attempt to gloss over the discrimination Alevis face in Turkey and the indignities they suffer on a daily basis. Reflecting the opposition to the project, demonstrators tried to disrupt the foundation-laying ceremony in Ankara’s predominantly Alevi Tuzlucayir district and clashed with police.

In a piece on the subject for Al-Monitor, posted Sept. 15, Rasim Ozan Kutahyali provides background on who Alevis are, and why they differ from Sunnis with whom they have historically been violently at odds in Turkey. He also provides insight into the steps the government is said to be working on to do away with some Alevi grievances.

Many Alevis would however take issue with Kutahyali’s attempt at placing the bulk of the responsibility for the past oppression of the Alevis onto the shoulders of secularists in Turkey, and particularly on today’s main opposition Republican People's Party (CHP). Kutahyali acknowledges, of course, that “the record of Turkish right-wing parties in the context of assimilation policies targeting Alevis is pathetic.”

His article however does not dwell sufficiently on the responsibility of the Islamists, who constitute the AKP’s grassroots supporters today, in some of the worst crimes committed against Alevis.

The list of crimes against Alevis in recent history — with the authorities being complicit one way or another, either through criminal negligence or through direct support — include the Malatya and Maras massacre of 1978, the Corum massacre of 1980 and the Sivas massacre of 1993.

All had resulted in the deaths of hundreds of innocent people, including scores of women and children. The most recent Sivas massacre, on July 2, 1993, was carried out by a demented crowd that had been agitated by local Sunnis and the local media for days.

The crowd set fire to the Madimak Hotel — where members of the Alevi intelligentsia were holding a cultural event — burning 33 people alive amid chants of “Allahu Akbar!” (God is Great). Those killed while local authorities looked on included famous bards, poets, writers and thinkers.

None of the massacres listed here happened on Erdogan's watch, of course. They all took place before the AKP came to power in 2002. Erdogan and AKP supporters often use this against the staunchly Kemalist and secularist CHP on whose watch some of the atrocities against Alevis occurred, especially in the 1930s.

But they conveniently overlook the fact that the Sivas massacre was agitated by radical Sunnis — including local politicians who were associated with the Islamist Welfare Party (RP) from which Erdogan also hails. Alevis also recall that Sevket Kazan, a leading RP member who was to serve as justice minister later in the decade in a right-wing coalition, acted as a voluntary lawyer for some of those arrested and tried over this atrocity.

As if to add insult to injury the Erdogan government also sat back for years and did little to close down the restaurant serving doner kebabs that was opened up on the ground floor of the reconstructed Madimak Hotel. Alevis are still clamoring for the hotel to be converted into a commemorative “Museum of Shame.”

Looking at all this, Alevis continue to accuse the Erdogan government of insincerity as it tries to reach out to them with various democratization projects. Alevis criticize such initiatives as paternalistic and say they are generally not consulted about their real needs when such proposals are drawn up by the government.

They also say that other steps considered offensive by Alevis underscore the government’s insincerity. For example, they note that the Erdogan government had no qualms whatsoever in naming the third suspension bridged that will join the two sides of the Bosporus, as the “Yavuz Sultan Selim Bridge.”

This name refers to the Ottoman Sultan (1465-1520) considered an archenemy by the Alevis, who accuse him of being one of history’s greatest slayers of their Anatolian co-religionists. Sunni apologists have traditionally rejected this claim, saying Yavuz Sultan Selim contributed much to the preservation and spread of Islam.

Alevis are also angry that they do not have equal representation at the Directorate of Religious Affairs, a staunchly Sunni organ of state established when the Caliphate was dissolved by Kemalist after the collapse of the Ottoman Empire. Many officials from the directorate continue to believe that Alevis are not Muslim in the strict Sunni sense of the word.

A large group of leading Alevi organizations in Turkey, and their affiliates in Europe, Australia and North America, issued a joint statement on Sept. 11 in connection with the measures the government is said to be preparing for Alevis, as well as the controversial mosque-cemevi project.

Rejecting these initiatives as cosmetic, they put forward the following list of demands:

This seems a tall order, but any government that is sincere about making Alevis equal citizens in Turkey has to take these demands seriously. It remains to be seen whether Erdogan and his AKP will rise to the occasion, or if all of this is truly cosmetic. What is certain however is that this deep-rooted fault line in Turkey remains very active.