Alevi Anger Boils Over in Ankara

Simmering anger in Ankara’s iconic Alevi neighborhood of Tuzlucayir suggests that the prime minister might be too late in addressing Alevi grievances. 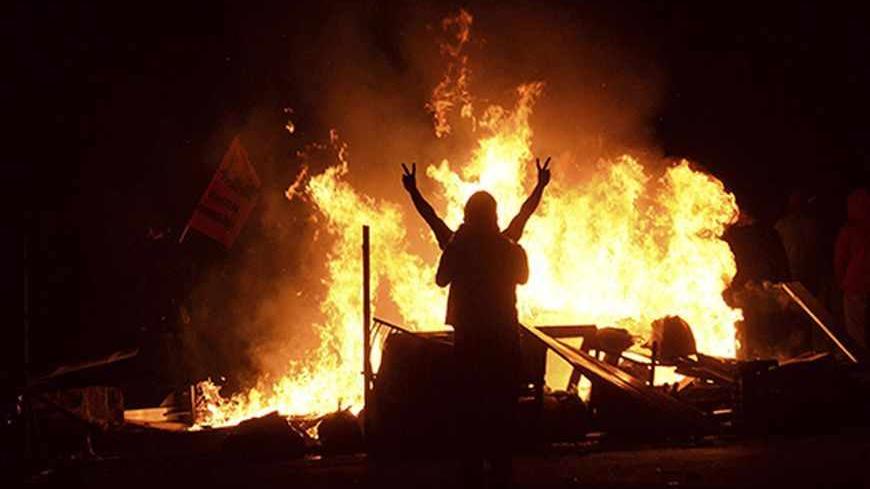 A demonstrator gestures as he stands behind burning barricades during a protest in the Tuzlucayir neighborhood of Ankara, Sept. 9, 2013. - REUTERS

ANKARA — It is a bizarre sight. On a sealed-off street on Ankara’s outskirts, riot police equipped with a tear-gas-firing vehicle watch over the construction of a religious shrine, guarding the site from the very people for whom it is intended.

Despite two weeks of street clashes earlier in September, workers continue to toil at what will eventually be a complex housing a Sunni mosque next to a cemevi, an assembly house and place of worship for Alevis, Turkey’s largest and long-stigmatized religious minority.

Launched as a bridge-building initiative, the project in Tuzlucayir, a working-class Alevi neighborhood with a strong leftist tradition, has backfired badly. With Alevis already at the forefront of anti-government protests since June, the recent unrest has stoked fears that pressure is building along Turkey’s sectarian fault line.

In Tuzlucayir, residents make no distinction between the powerful community of the Sunni preacher Fethullah Gulen funding the new complex and the ruling Justice and Development Party (AKP), which has given its blessing. Mistrust in both runs deep. A prominent Alevi figure who teamed up with Gulen to promote the project is widely viewed as a “sellout.” In what is touted as an olive branch, the locals see instead a stick for herding them into the mosque in a stealth move to assimilate them into the Sunni culture and faith.

A “democratization package” Prime Minister Recep Tayyip Erdogan is expected to unveil in late September will likely address some Alevi grievances. It will reportedly grant some sort of official status to cemevis, entitling them to state funding, which is currently available only to mosques. The simmering anger in Tuzlucayir, however, suggests the planned move may be too little, too late.

Streets in Tuzlucayir are still littered with the debris of charred barricades, and defiant graffiti covers the walls. Broken pavement stones remain piled on the sidewalks, at the ready for constructing new barricades.

“Each and every day we have been insulted. Each and every day we have been slapped in the face. … Even if they grant us some rights now, they will seek obedience in return. I’m not optimistic,” Mehmet Uzuner, head of an Alevi association told Al-Monitor in the community-funded cemevi he manages in Tuzlucayir. “Yet, if he [Erdogan] proves us wrong, we’ll pay him respect,” Uzuner allowed, placing his hand on his heart.

A coterie of neat, elderly men sit pensively around Uzuner in the cemevi, where portraits of Mustafa Kemal Ataturk, modern Turkey’s secularist founder, adorn the walls as prominently as images of Ali, the prophet venerated by Alevis. One recent “slap” continues to sting — the government’s decision to name a Bosphorus bridge after Sultan Selim the Grim, the symbol of Alevi massacres in Ottoman times.

“If the state is doing this, being well aware of our sensitivity toward Selim, you tell me what the ignorant man in the street might do!” Uzuner exclaimed.

After centuries of persecution, Alevis embraced Ataturk’s republic as a salvation. Estimated at 15% to 20% of Turkey’s population, today Alevis represent a staunch segment of Turkey’s secularist quarter. Yet, their stigma has not only endured, but has taken on a political dimension in republican times through a strong Alevi presence in socialist and communist movements. Dozens of Alevis perished in political massacres in the late 1970s, and more than 30 were burnt alive by an Islamist mob as recently as 1993.

In Tuzlucayir, young activists boast that they are reviving the spirit of “Little Moscow,” the nickname the neighborhood acquired in the 1970s when it was a hotbed of leftist militancy. Graffiti on the walls pays tribute to myriad leftist factions, including outlawed armed groups. “Help us, Ali,” one tag implores, with the circled "A" of the anarchists standing in for the prophet’s initial.

Doruk Yildirim, 25, introduced himself as a “professional revolutionary” when he showed this reporter around a library that his socialist group has set up in a tiny building in the neighborhood park. It is a tribute to Ethem Sarisuluk, one of five protesters killed in anti-government demonstrations since June. Why, however, would the AKP municipality allocate the building to them? “They didn't,” Yildirim replied curtly. “We occupied it.”

Small but belligerent leftist groups such as Yildirim’s have been at the forefront of the clashes in Tuzlucayir. Locals, however, say that ordinary Alevis remain the majority in the streets.

“I myself got gas masks for my two sons. We go to the barricades together. My wife comes along, too,” said Mehmet Boyraz, 40, sipping tea in an outdoor cafe, where the playful clink of rummikub tiles belies the underlying fury and apprehension.

Erdogan’s reform pledges are met with suspicion. “We don’t want their money for the cemevis. We don’t want anything. Can’t they just leave us alone and show respect?” grumbled Nadir, a 47-year-old driver.

Alevi problems soon become a side issue when Nadir embarks on a breathless diatribe about how the AKP is undermining democracy and the secular system. “We are losing the republic to an Islamist regime. Turkey cannot be the country of bigots. We’ll not let this happen,” he said, banging the table.

Boyraz is concerned about the possibility of Sunni-Alevi strife, similar to the conflict in Syria. Though Alevi Turks have little in common with Syria’s Alawites, AKP members often imply that the community backs Syrian leader Bashar al-Assad. Recently, Ankara Mayor Melih Gokcek called the protesters in Tuzlucayir “Assad’s soldiers.”

Some locals said they did not know that Assad was an Alawite until the war started. They seem to worry not about Assad’s fate, but Ankara’s support for the Syrian opposition, which includes radical Sunni jihadists.

“Look at the dogs Erdogan is feeding! How they slaughter people! How are we supposed to trust him?” Gurcan, a 50-year-old worker, asked. A middle-aged woman chimed in, “Sunni bigots are looking at Syria and getting ideas that they could do the same to us here.”

Back in the cemevi, men and women mingle freely as they arrive for a weekly religious service, each bringing a small package of food. The dede, the elder leading the service, delivers a simple sermon in Turkish that deals mainly with human virtues. Two men, playing a violin and a saz, recite songs and prayers, and a small group performs the semah dance. The closing prayers are dedicated to Alevi saints and Ataturk.

The food brought by the worshippers is pooled and repacked in equal portions. The dede asks for confirmation that everybody has received a package and is content with how the food has been shared, a practice underscoring social justice and solidarity, a central theme in Alevism. This reporter also receives a package, containing two apples, a biscuit, a small piece of bread and two morsels of homemade sweets.

Once the service is over, the cemevi doubles as a meeting place for small talk. The soft-spoken elders emphasize they are not against mosques, but feel that cemevis and mosques should remain separate to avoid friction over incompatible rituals. They worry about the youths confronting police. Some frown upon far-left militants and damaged public property. They flinch at the mention of the risk of sectarian bloodshed, reciting Alevi teachings of tolerance and quickly moving on from the subject.

“One should certainly seek justice when discrimination is so rife,” the dede, 75-year-old Salih Hosafci, offered. “But violence is no good. Be a victim a thousand times, but don’t be a tyrant even once.”

Sibel Utku Bila is a freelance journalist based in Ankara who has covered Turkey for 15 years. She was a correspondent for Agence France-Presse (AFP) from 1999 to 2011. She also worked as an editor at the Hurriyet Daily News, Turkey’s oldest English-language newspaper.