Shiites and Alevis in Turkey continue to struggle for rights and recognition. 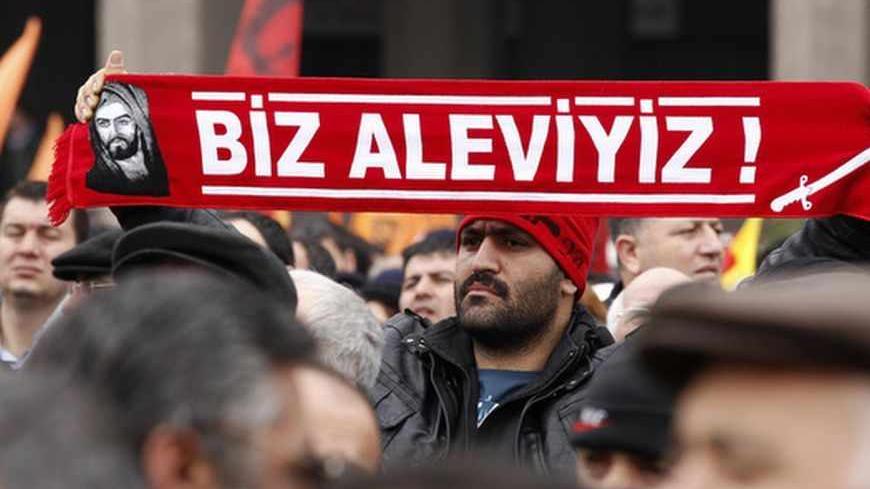 A protester holds a banner that reads "We are Alevi" in Ankara, March 13, 2012. - REUTERS/Umit Bektas

On Sept. 8, in Tuzlucayir, a poor suburb of Ankara, a major ground-laying ceremony was celebrated for "a mosque and cemevi [an Alevi place of worship] side-by-side." This project was initiated by the Fethullah Gulen Movement and supported by a prominent Alevi dede, or elder, Izzettin Dogan. Yet, the celebration was overshadowed by angry street protesters who clashed with the police. You may wonder why such a generous and grandiose project would be deemed unacceptable by a relatively poor neighborhood.

The idea of mosque and cemevi together was made public by Gulen’s declaration around mid-June as a sign of rapprochement after the controversial naming of a bridge across the Bosphorus. Alevi elder Dogan announced on his web page that the idea was welcomed by Alevis. However, since the construction started on Sept. 8, Tuzlucayir protests have not stopped. Several Alevi representatives throughout Turkey and in the diaspora went public with their opposition to the project.

Presented as the “second Alevi opening” toward democratization of the country, the Gulen Movement hoped this project would be a helpful step to reconcile the grievances of Alevis and bring peace between the two groups. To understand the causes of this yearning for peace and brotherhood, one needs to know how religion is regulated in Turkey.

Anytime you hear about Turkey and religion, it is stated that Turkey is a 99% Muslim country, with 1% being non-Muslim. All the Muslims thus fall into the ambiguous 99% category. The secular Turkish state coordinates and governs religious matters through the Religious Affairs Directorate. The directorate is attached to the prime minister’s office and is charged with several responsibilities, including repairing and maintaining mosques, and paying the salaries of mosque personnel in Turkey and abroad. The directorate's 2013 budget is sizeable, exceeding the combined budgets of Foreign and Interior Ministries. Although “other” Turks contribute with their taxes, they do not benefit from the directorate's services. It is a misnomer because it is in practice the Directorate of Sunni Affairs, funded by all taxpayers, yet serving only some of them. When we look at the “other Muslims” two categories emerge: Shiites and Alevis.

Turkish Shiites are a small community who maintain their own mosques. Kadir Akaras, the chairman of Ehli Beyt Scholars Association, told Al-Monitor, “Most Shiite branches in Turkey maintain an independent standing from the directorate because it is against our belief to be under the guidance of any state authority.” These groups do not receive any funding from the government to maintain their mosques or pay their imams. They seem to be content functioning independently.

Alevis are a larger and more diverse group. Numbers vary, but the US Commission on International Religious Freedom estimates that the Alevi community consists of 15% to 20% of the population, or about 25 million. A 2012 report from the Republican People’s Party (CHP) suggests a figure of 13 million. The Alevis are a minority subculture with a history of persecution throughout the centuries, even referred to as heretics. Most of this history is vehemently contested by the Sunnis.

The most frequently voiced Alevi demands are simple. They would like their place of gathering, cemevis, to be considered a place of worship by the Turkish state. Many of them seek exemption for their children from obligatory religion classes in high school. Some of them, along with many Sunnis, might wish to see less involvement of the state in religion, to do away with the directorate. None of these demands include being a part of Sunni Islam.

Now, back to the protests in Tuzlucayir, where the Justice and Development Party (AKP) received less than 10% percent of the vote in 2011 elections. Columnist Veli Bayrak, born and raised in the suburb, wrote, “Tuzlucayir is about 80% Alevi. It has cemevis and mosques. We do not need this project. So, why was our district chosen [the project]?”

Ali Kenanoglu, chairman of the Hubyar Sultan Alevi Culture Center, told Al-Monitor that they are not in any way against a mosque and cemevi as two buildings standing next to each other, but they are against the Alevi prayer house being built as an annex of a mosque. Tuzlucayir residents recorded a video expressing their opposition to the project, asking authorities to "build a workplace if you want to help us." They further asked, "Why is Gulen intervening in our district?"

Many Alevis view this project as another step of Sunnification. Their fear of assimilation has roots in several ill-willed projects. For example, many Alevi towns have mosques (which they do not need) built against their wishes, and imams accredited by the Directorate of Religious Affairs.

As the Tuzlucayir protests continue, Deputy Prime Minister Bekir Bozdag told the press, “This was not a government project, therefore the criticism that the government is trying to assimilate Alevis is not fair.” However, most of the public see the Gulen Movement and the government to be in cohorts on the project. One question that arises is whether the Gulen Movement’s frictions with the government are mitigated as the two groups stick together in support of this project. Bozdag added that the opposition to the project is not coming from Alevis, but from “some marginal illegal groups” who want to provoke the public. In the meantime, it was made public that similar projects are to be built in five other major cities.

Suleyman Gunduz, a former AKP MP and a columnist for Yeni Safak, told Al-Monitor that the Syrian civil war has increased the doubts and vulnerabilities of the Alevi population, and that it would be a mistake to view the Tuzlucayir and Gezi protests from a sectarian point of view. Gunduz eloquently added that the only way to resolve the friction is to enhance individual rights and freedoms, and that we have not yet accomplished all that we should.

In June 2013, the peak month of the Gezi protests, Tuzlucayir’s center was filled with tents where they sang songs and protested in solidarity with Gezi. As an Ankara native, I have known Tuzlucayir not as just “Little Moscow,” but the place to find the best baglamas (a stringed musical instrument resembling the bouzouki). During my last visit to repair a bouzouki, a friend and I were welcomed with big smiles. The master working on the instrument taught us a beautiful folk song, while his daughter said, “Alevis are more than folk songs.” Over watermelon and backgammon, we spoke for hours about how the government only sees Alevis as a “colorful” part of the land, but ignores the core of their religious identity.

Police did not intervene in June, hence there was no violence. Now, to voice a blanket claim that these people are all members of marginal groups and illegal leftist organizations — with similar arguments having been put forth regarding the Middle East Technical University protests and others in Turkey — is mindboggling. Just as the Muslim Brotherhood Turks protest in the heart of Istanbul in solidarity with the Egyptian Brotherhood without police intervention, do not other Muslims, non-Muslims, atheists, leftists and gays have a right to protest? Their discrimination and taxation without adequate representation by the Directorate of Religious Affairs is in itself a basis to protest. The directorate is, at best, inadequate to accommodate all Turks. It must be reformed or abolished.

Pinar Tremblay is a doctoral candidate at University of California, Los Angeles, in political science and an adjunct faculty member at California State Polytechnic University, Pomona. She has previously been published in the Hurriyet Daily News and Today's Zaman. On Twitter: @pinartremblay