What does Erdogan mean by 'Alevis without Ali'?

In a fresh affront to Alevis, Turkish Prime Minister Recep Tayyip Erdogan has started a polemic about “Alevism without Ali” in what analysts see as an attempt to Sunnify Alevis and ostracize those who resist assimilation. 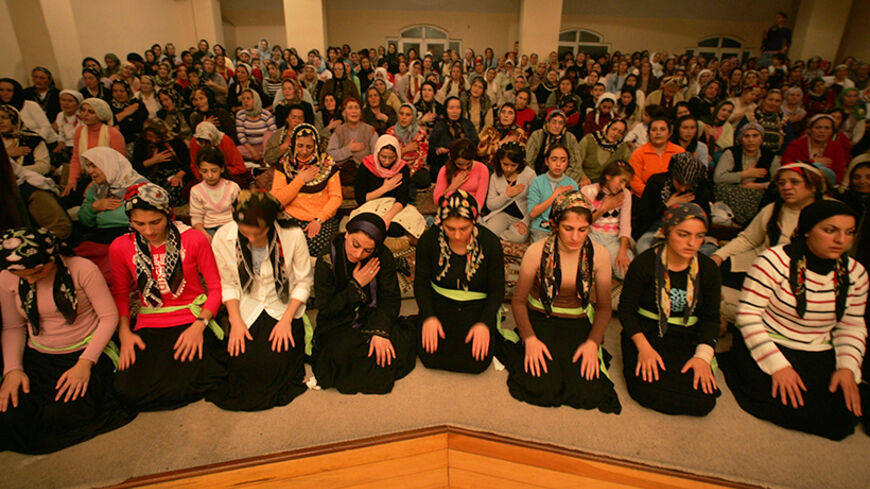 Turkish Prime Minister Recep Tayyip Erdogan has displayed remarkable boldness in using century-old yet still explosive conflicts as material for his everyday politics. His sectarian outbursts hit a new pitch in March as he branded Shiites “liars, slanderers and instigators.” Now he is out to classify Turkey’s Alevis into “Alevis with Ali” and “Alevis without Ali” — respectively, Alevis he sees as loyal to Islam and wants to lure from the "cemevi" (the Alevi house of worship) to the mosque, and those whom he considers atheists.

Veneration of "Ahl al-Bayt" (the family of the Prophet Muhammad), primarily his son-in-law Ali Ibn Abu Talib, is pivotal to Alevism. The narrative of “Alevism without Ali” stems from a theory floated in Marxist-socialist Alevi circles according to which Alevism is a body of pre-Islamic religious rites. Advocates of this theory are a very tiny minority.

Years ago, Turkish researcher Faik Bulut wrote a book called “Alevism without Ali,” which argued that the Ali worshipped by Alevis is largely detached from the historical figure of the prophet. The book was duly debated and rebuttals were written. The reality today remains that for the overwhelming majority of Alevis — who, like Shiites, venerate Ali but follow distinct Turkish Sufi principles of the Bektashi order — "Alevism without Ali" is not Alevism.

Yet, Erdogan has taken up a notion with a truly small following and put it into such a general context that he has irked even Alevis who believe their Ali has nothing to do with the Ali of Sunni Muslims. In any case, the real problem here is not what Alevism is, but the government’s patronizing attempt to define Alevism according to its own Sunni stereotypes.

Erdogan made a divisive move in July 2013, when he declared, “If Alevism is about loving Ali, I’m an Alevi to a T.” In subsequent statements, he made it clear he would not leave Ali to the Alevis. Finally, he crossed a delicate line last month when he charged that Germany-based “Alevis without Ali” had instigated the criticism that German President Joachim Gauck directed at his government during a visit to Ankara.

From sectarian rapprochement to conflict

Back in the 1990s, a book by Iranian sociologist Ali Shariati, published in Turkish under the title “Alavid Shiism and Safavid Shiism,” made a significant impact in Turkey, especially on Sunni Islamists. The portrait of Shiite Islam disengaged from history and politics encouraged Sunnis to take a fresh look at Shiites, though they remained seriously at odds with Alevis. The book’s arguments were used widely in efforts to bring Sunnis and Shiites closer.

But the relative warming in Turkey came to naught with a rise of a sectarian rhetoric that started with the Shiite ascent to power in Iraq and then sharpened as a result of the civil war in Syria. Some saw Iran’s support for Syria’s Alawite President Bashar al-Assad as the return to Safavid Shiism. The Syrian conflict revived Orthodox Sunni prejudices against Shiites and Alevis alike, often on the scale of hatred and enmity. The covert hatred pervading the rhetoric of top political figures resonated much more strongly at the grassroots level.

By storming recklessly into sectarian realms supposed to be off-limits to politicians, Erdogan is attempting a political surgery on Alevism that's bound to have serious repercussions. In Erdogan’s understanding, Alevis who would accept going to the mosque are “Alevis with Ali” — in other words, "good" Alevis. Thus, he implicitly shuts out Alevis who stick to the cemevi. Erdogan’s intent was laid bare May 28 by Deputy Prime Minister Emrullah Isler, who said, “We cannot accept cemevis as houses of worship because we consider Alevism to be inside the realm of Islam. And since [Alevis] consider themselves to be Muslims, then Islam’s house of worship is the masjid, the mosque.”

For Alevis, this attitude means, more or less, an attempt to Sunnify or “mosquify” them and ostracize those who refuse to acquiesce. For government officials to attempt to coin a definition for a religious community, ignoring the way the community describes itself, is not something one would expect in a democratic state. Not surprisingly, Isler’s remarks infuriated the Alevis.

“By claiming that the cemevi is not a house of worship and issuing invitations to the mosque, the deputy prime minister has spilled his hatred out,” said Sabahat Akkiraz, an Alevi parliament member from the main opposition Republican People’s Party (CHP). “The Alevis are not asking anyone [to teach them] what a house of worship is. The cemevi is a house of worship, and passing judgments on it is beyond the government or anyone else.”

In comments to Al-Monitor, researcher Faik Bulut made a detailed analysis of Erdogan’s attitude, saying, “I see several reasons behind it. Ideologically, it is a manifestation of the Sunni Islam mindset. Erdogan’s narrative is based on what he has learned in the past from books he read in [Islamist] ‘conversation groups’ that see Alevis as rafidah [rejectors]. Anybody hailing from the Welfare Party tradition has that impulse. When he says, ‘If Alevism is about loving Ali, I’m more Alevi than you,’ he attempts to Sunnify or assimilate Alevism.

"The second reason is political — a tactic to divide his opponents. He is using verbal violence to criminalize a certain group. As a result, people shy away from speaking out. For instance, he is targeting Alevis because of their affiliation with the CHP. When CHP Chairman Kemal Kilicdaroglu criticized the government’s Syria policy, Erdogan linked this criticism to Kilicdaroglu’s Alevi identity. Meanwhile, he is hijacking the agenda to defer outstanding problems. The issue is closely related also to [the situation in] the Middle East. Generally speaking, Shiites today put up the strongest resistance to external forces. In this context, Erdogan is playing classic sectarian politics to polarize people and win supporters.”

Asked whether the notion of “Alevism without Ali” that he coined years ago concurs with what Erdogan means today, Bulut said, “What I meant by ‘Alevism without Ali’ was the stark difference between the Alevis’ Ali and the Ali in Sunni literature. The Alevi theology has different concepts of god, prophet and universe. Sunnis have an exoteric point of view, while Alevis an esoteric one. The Sunni percept of Ali is more faithful to the historic facts. That’s why Erdogan is striking from that angle and attempting an operation of Sunnification. The Alevis attracted Erdogan’s wrath when the [government-organized] Alevi workshops collapsed as Alevis rejected assimilation and ‘mosquification.’”

Ali Topuz, a columnist for Radikal, warns that the controversy will have dire consequences for Alevis. Topuz told Al-Monitor, “Erdogan’s attitude … contains all the elements and defects of the [typical] government rhetoric vis-a-vis Alevis. Is there really an Alevism without Ali? Is this a theological debate? Is it a scientific one? Before even going into those questions, one should recall this: The prime minister and his government themselves consider Alevis to be not good enough for Ali. Virtually all ministers and spokespeople have declared themselves to be ‘the best Alevi if Alevism is about loving Ali.’ So it means the prime minister, along with other government members, consider Alevis to be not good enough for Ali!

"Armed with government power, they are hurling threats that ‘No one should claim to be an Alevi if they don’t live like Ali.’ That’s very dangerous. The problem has political, social, legal, theological and — very sadly — economic aspects and consequences. In a political context, Erdogan speaks like a sect leader rather than a head of government. Thus, the Alevi community’s lawful and legitimate demands are being deferred behind the smokescreen of theological-sounding rhetoric. Like ‘You want the cemevi recognized? Then come to the mosque.’ When theology determines politics and politics then determines the laws, and when the government head himself is the driving force behind all this, anyone beyond this theological percept is cast out. This means a social problem, for this attitude is also sending a message to pious or religiously sensible Sunnis that Alevis are not good people. So, just at a time when they have finally ceased to disguise themselves and become vocal in demanding their rights, Alevis are forced to again disguise themselves when they look for jobs, apply for public positions and do business unless they acquiesce to Sunnification. In sum, Erdogan is supposedly angry with the ‘Alevis without Ali’ but in fact, he himself considers Alevis not good enough for Ali. He is trying to strip them of Ali.”

In short, the top echelons of power may look like they have an inclusive attitude supposedly embracing the Alevis into the fold of Islam, but in reality they are ostracizing them. Like all other religious groups, Alevis want to be acknowledged with their own identity and institutions. The government continues to hide behind the narrative that it held seven workshops to resolve Alevi problems, thus making Alevis a formal dialogue partner to the state for the first time, naming the university in Nevsehir after 13th-century Alevi thinker Haji Bektash Veli, adding Alevism as a subject in school curricula and publishing 13 volumes of Alevi classics. Erdogan’s rhetoric, however, keeps eroding the already loose stitches holding the fragile Alevis to the Sunni majority.

The discussion of Ali’s place in Alevism is up to religious scholars and Alevis themselves. When a leader whose Sunni faith is his rallying cry makes the issue the subject of political wrangling amid already cracking sectarian fault lines, this is intentional polarization, to say the least.