Turkey is going through a post-Kemalist transition with problems and habits of the former region still prevailing. 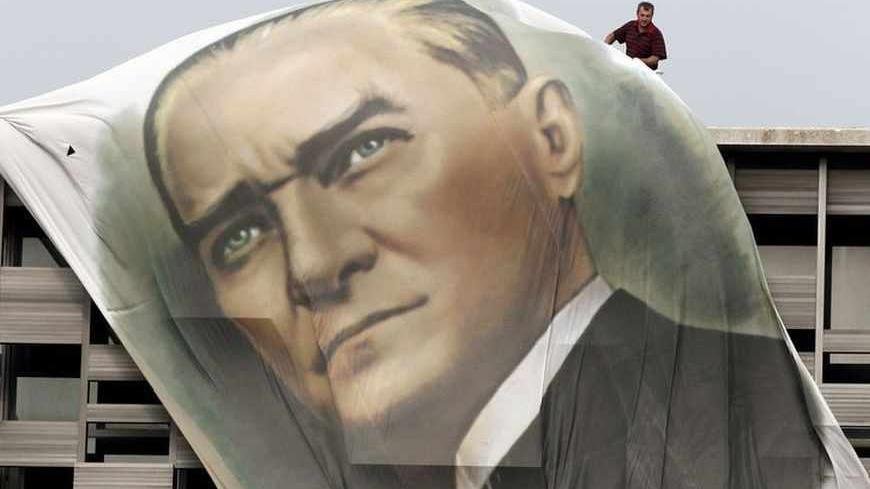 A worker fixes a giant portrait of Mustafa Kemal Ataturk at the top of the Ataturk Cultural Center in Istanbul's Taksim Square, June 28, 2013. - REUTERS/Osman Orsal

Turkey at the moment is a country going through a peculiar transition. We are moving from the former regime, the Kemalist military tutelage, to a new regime — but what kind of a regime will that be? That is the question in everybody’s mind now.

Will it be a liberal democratic regime that we all crave for with respect for human rights, democracy and established market institutions or will it be a new tutelage regime where only the acts of the former regime have been modified and non-democratic bureaucratic forces still prevail and where free and just elections are held only for show?

After today, every week I will try to explain to Al-Monitor readers the realities of today’s Turkey with all their features. To understand today, we have to look at yesterday to try to understand which direction Turkey is heading.

A vast proportion of Turkey was delighted with the disappearance of that totalitarian regime that treated religious people, Kurds, Alevis, Christians and Jews as a second-class citizens and did not hesitate to persecute them. During the reign of the former regime, the Turkish state’s definition of an ideal citizen was:

1.   Have a secular lifestyle

This was a LAST [Secular Sunni-Turkish] identity similar to the WASP [White Anglo-Saxon Protestant] identity in the USA. According to the Kemalist ideology, Turkey should be made up of citizens with this ideal identity. The state, especially the army of the former regime, was a body imposing assimilation policies to ensure those without this identity conform to the LAST format. Religious Sunnis were to be secularized, Alevis to be made Sunnis, non-Muslims were to become Muslims and non-Turks would become Turks. The Turkish state was delighted when these groups assimilated of their own will. But those who said “I won’t change my identity” were beaten into submission.

Naturally, a regime which forced its people to change their identities had to be a totalitarian regime. Many issues still debated in Turkey today were the handiwork of that regime.

Kurds, who are the second-largest population group of Turkey, justifiably resisted these oppressive assimilation policies. That is the origin of the Kurdish issue of Turkey. The Turkish state banned speaking and singing in Kurdish. To write in Kurdish and to publish Kurdish language books, newspapers and journals was prohibited. The original names of majority Kurdish cities and towns were replaced with Turkish names. There was an attempt to rewrite the Kurdish narrative. Kurds, who would disown their identity and accept being assimilated could have achieved any rank in the state. But public space was banned to those who insisted to preserving their Kurdish identity and who were not ashamed of being a Kurd. The only treatment such resisting Kurds would get from the former Kemalist regime was oppression and marginalization.

Religious Sunnis, who still make up the majority of Turkey, resisted forced secularization policies. Turkey’s Islam issue arose from here. One symbol the former regime detested most was the headscarf. Females with headscarves could not even be students. Scarves were totally banned in universities and state offices. In the Turkish army, if the wife or the sister or the mother of a military man were wearing headscarf, he would be dismissed from the army with no right to appeal. Military personnel were ordered to inform on each other. A Turkish soldier was to immediately report if a colleague was praying secretly or his wife was secretly covering up outside military premises. A Turkish soldier who could prove that a colleague was adhering to the Islamic lifestyle was rewarded. Those whose religiosity was proven were immediately expelled from the army. Worse, those expelled from the army during the February 28 coup [1997] were denied jobs even in the private sector and in local administration. Those municipalities and private companies employing expelled religious soldiers were warned and reprimanded. Under the rule of the former regime, it was as if the religious had no right to life.

Alevis, who constitute Turkey’s largest religious minority, resisted the Turkish state’s forced "become a Sunni" policies. That is how Turkey’s Alevi issue erupted. Most of the Alevis lived a secular life. That was the ideal lifestyle the state aspired to, but there was the Ottoman heritage of distrust and dislike of the Alevis. In Ottoman Turkey, Alevis were always seen as  “rebellious” and “deviants” who could rebel against the state at any time, unless crushed and kept that way. This was the Kemalist republic’s inheritance from the Ottomans. The republic, as its first step, imposed controls over Alevi religious personalities. The rank of  “Dede” which denotes religious authority was banned. Then, in 1938 with the Dersim Massacre, there was attempt to annihilate the entire Alevi population in that region.

After the 1960s, the increasing participation of the Alevis in leftist movements amplified the "communism danger" paranoia of the Turkish state. Every Alevi citizen was considered as a potential communist. In the 1970s, three Alevi massacres organized by the "Stay Behind" body of the Kemalist regime took place in Corum, Malatya and Maras.  At the beginning of the 1990s, there were two other massacres at Sivas and Gazi.

The Turkish "deep state" had two goals in these massacres. The first was to suppress Alevis who were always seen as a potential threat. The second was to portray the massacres as the work of Sunnis and thus create an environment of Alevi-Sunni confrontation and thus consolidate the state’s power. The Western media had misread those events. The Kemalist regime could not survive otherwise. The Kemalist regime in the 1970s, while designating "communism” as the primary threat against Turkey and labeling all Alevi citizens as "potential communists," was also organizing the religious segment against Alevis. In the 1990s, Islamism was perceived as the primary threat and during the February 28 coup [1997], this time the Alevis were mobilized against the Sunnis. This was the basic strategy of the Kemalist regime.

Non-Muslim citizens of Turkey had no more strength to resist this brutal regime. In the last 100 years, Anatolia lived through a systematic ethnic cleansing. The Ottoman Progress and Union Party launched this ethnic cleansing campaign by massacring Armenians eight years before the declaration of the republic. The Kemalist regime pursued the cleansing after independence. During the 1934 Thrace disturbances Jews were exiled. In the 1942 Wealth Tax episode, non-Muslims lost almost all their wealth. The state allowed anti-Greek violence in the Sept. 6-7, 1955, riots. After so many disgraceful actions, we have a very limited number of non-Muslims in Turkey. But because of mass massacres in 1915, labeled as the Armenian Genocide, the Armenian issue remains as the most important external issue of Turkey.

The basic mission of Turkish diplomats, many of them remnants of the old regime, is still to deal with the Armenian issue. The Kemalist diplomatic class of the former regime is still shamelessly dedicated to deny the ugly 1915 massacres, the “Great Disaster.” An article was published in Al-Monitor that defended these racist-minded Kemalist diplomats under the pretext of warning against new Islamist diplomats to be appointed.

Despite 11 years of Justice and Development Party (AKP) reign, not a single Islamist diplomat had been appointed.

This is why you can’t understand the enduring questions such as the Kurdish issue, Alevis, secularism vs. Islamism and the Armenian issue without understanding the former regime. Turkey might have left the former regime behind, but it has yet to replace it with a liberal and democratic state of law. We are in the midst of real post-Kemalist transition. Problems and habits of the former regime still prevail. There is still much oppression, too many bans and injustices. There are new bureaucratic forces that want to take over the powers of the former military tutelage. There are also powerful media at the service of the bureaucratic forces that want to rule the country independent of elected politicians. Then there are the media under direct control of the civilian government, hence the current asymmetric shadow boxing inside the media.

Developments in the Turkish media of recent times conceal the realities. Everyone hides true opinions and goals by engaging in the faux debate. The situation of the Turkish media today is as disastrous as it was under the old regime, but this time more complicated and difficult to handle.