Mustafa Akyol speculates on what will be the nature of post-Kemalist Turkey. 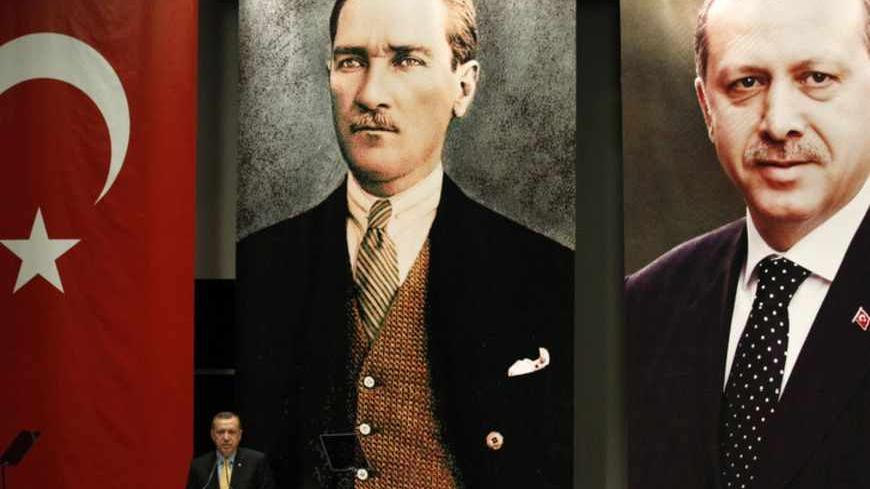 Turkey's Prime Minister Recep Tayyip Erdogan addresses the members of his ruling Justice and Development Party (AKP), as he stands in front of Turkey's national flag and portraits of Mustafa Kemal Ataturk, founder of modern Turkey, and of himself during a meeting at his party headquarters in Ankara, July 11, 2012. - REUTERS/Umit Bektas

There are breathtaking developments in Turkey these days: The government is negotiating with the PKK, a “terrorist organization” that it fought for three decades, while the prime minister is arguing for a decentralized political system. On another front, veiled women are gaining the right to work as lawyers, defying an authoritarian secularism that disallowed any “religious symbol” in public life. Turkey is changing, and it is changing fast.

It is not hard to see that all such developments are either threatening, or altering, the two main pillars of the Republic of Turkey enacted by its founding leader, Mustafa Kemal Atatürk: Nationalism and secularism. The first pillar asserted that every citizen of the republic is a Turk, and, if he is not, he has to be converted into one. That is why the language and culture of the main non-Turkish group, the Kurds, have been suppressed by Atatürk and his followers. But now, the Turkish government is openly acknowledging the existence of Kurds and their rights. It is even “negotiating with the terrorists” who have fought for these rights.

The second pillar, secularism, is also being unraveled, at least in the way it was framed by Atatürk. This self-styled secularism (laiklik, from the French laïcité) was defined by a strong distaste towards religion, and therefore it implied not the separation of religion and state, but the repression and manipulation of religion by the state. One key purpose was to make religion as invisible as possible, via bans on religious symbols such as the Islamic headscarf. But now, veiled women are everywhere, and even in the very seats of the first and second ladies, as the spouses of President Abdullah Gül and Prime Minister Tayyip Erdoğan.

In other words, Atatürk’s ideological legacy, commonly called “Kemalism,” is failing. No wonder Turkey’s Kemalists, who see Atatürk as the best thing that has ever happened to the nation, are in a mood of shock, anger, and despair. Go to any bookstore in Turkey and you will see dozens of Kemalist bestsellers warning how the republic is being destroyed by the “enemies within,” who are typically the Islamists, Kurds and the liberals.

In a less heated tone, it would be fair to say that Turkey is now in a post-Kemalist phase, in which Kemalism is ceasing to be the dominant ideology, and is becoming one of the many competing ones. Atatürk is still a widely respected figure, as the county’s founder, but his ideas are less definitive for the nation, and his criticism is becoming growingly “normal.” (In the past, it was a heretical idea, if not a crime, to offer any criticism about the “Supreme Leader,” as he is defined in most official texts.)

But what will this post-Kemalist phase, both led and also symbolized by the incumbent Justice and Development Party (AKP) of Erdoğan, bring to the country? The answer is bitterly disputed, as there are roughly three distinct groups with opposing narratives:

The pessimists: Of course, these are mainly the Kemalists. They believe that “Atatürk’s principles” were what kept Turkey as a modern, progressive and independent nation, and thus the weakening of these principles will make the country a miserable place dominated by religious reactionaries and unpatriotic cosmopolitans. Some even believe that Turkey will cease to exist as an independent nation, to be divided by Kurdish separatism and eaten alive by “imperialism.” Many among them seriously believe that the infamous Treaty of Sevres of 1920, which divided Turkey into pieces and shared it all among European powers, is still waiting for its day to be re-implemented.

Even less conspiratorial-minded Kemalists have a good reason to be concerned: They fear that the state will be dominated by the groups they used to exclude, and now they themselves will become the new outcasts. Like most Turks, they see politics as a zero-sum game, and worry that they are the new the losers.

The optimists: These are the social groups who have felt oppressed by the Kemalist elite for almost a century, but believe that time for emancipation has finally come. They see the current transformation in Turkey as something similar to the end of apartheid in South Africa, likening themselves to the blacks. The majority of them are religious conservatives who almost unanimously vote for the AKP. They proudly note that the state, which has been hostile to them since the 1920s, is now becoming “our state.” Combined with the feelings of a neo-Ottoman rebirth, this narrative hails the “New Turkey” of the AKP, which is seen as more democratic at home, and more powerful abroad.

The unenthusiastic: This is a small minority which is a fan of neither the old Kemalist Turkey, nor the new one that is unfolding. Most secular liberals fall into this category. They had found the Kemalist establishment too nationalist, militarist and narrow-minded. Hence, in the past ten years, in a clear defiance of the Kemalists, they have supported the AKP, finding it progressive on many key issues — such as the Kurdish issue, minority rights and the European Union accession.

However, most of these secular liberals are now becoming concerned about the AKP’s own authoritarian tendencies, real or perceived. Some of them also note that, despite enormous changes, some things never change in Turkey, such as the patriarchal political culture and the hubris of whomever comes to power. (The recent piece in Al-Monitor by Karabekir Akkoyunlu, Erdogan’s ‘Brave New Turkey’ Looks to Past and Future, is a good example of this approach.)

Finally, if you wonder where I personally stand, I would probably fall somewhere between the optimists and the unenthusiastic. For I am convinced that the post-Kemalist Turkey will be a more free, democratic, and prosperous country than the Kemalist one. But I see that some illiberal aspects of the political culture persist, and therefore the struggle for liberty has to go on.