Political disputes between the Kemalist army and democratically elected political parties once were settled heavy-handedly, and a recent investigation into Turgut Ozal's death ruled that he was poisoned. 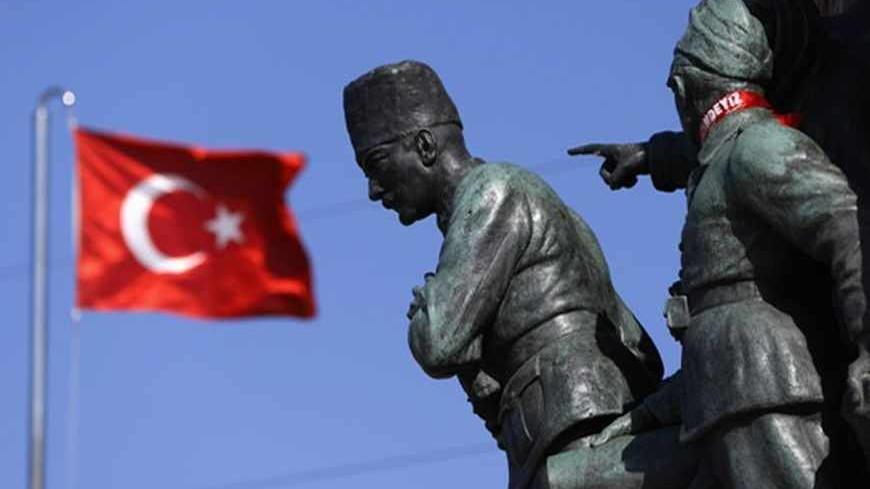 A Turkish flag flutters near the monument of Mustafa Kemal Ataturk at Taksim Square, in Istanbul, June 24, 2013. - REUTERS/Marko Djurica

In my previous article, I wrote about the most significant political dispute in New Turkey, the spat between Prime Minister Recep Tayyip Erdogan’s government and the Gulen movement. Quarters close to the government argue that the Gulenists are seeking to establish themselves in the military, civilian bureaucracy and the judiciary to install a “new Gulenist tutelage regime” in place of the “old Kemalist tutelage regime.” The Gulenists deny the allegations. Turkey’s democratically elected governments have always complained of tutelage. The debate in the Erdogan versus Gulen context is only a recent development, but the problem of tutelage has a long history in Turkish politics.

In the Old Turkey era, similar rows took place between the Kemalist army and democratically elected political parties. Certainly, the rows at the time were waged not through shadow boxing with subtle language as at present, but through heavyweight boxing with the toughest language. And up until the period between 2007 and 2011, the army pummeled democratically elected parties.

In the second half of the 1950s, the military emerged victorious from its row with the Democrat Party (DP) of then-Prime Minister Adnan Menderes, and a military coup followed on May 27, 1960. The army abolished the democratic system and executed Menderes and two of his ministers. Many DP members were jailed. Those who ducked imprisonment saw their properties confiscated.

In the ensuing period, the Turkish people brought to power Suleyman Demirel’s Justice Party, which was whispering to the people that it embraced Menderes’ legacy — to say this aloud was prohibited. Having witnessed Menderes’ fate, Demirel was gripped by constant fear of the military and stayed away from problems the military considered a “red line” — Islam, the Kurds, the Alevis and the Armenian issue. Even though Demirel devoted all his energy to economic development, he could not escape being toppled in a military coup on March 12, 1971. Demirel made no effort to resist the coup. As soon as the military made its announcement, he resigned and said he would lend full support to the army in setting up a military government.

The majority of the Turkish people and a significant part of the Justice Party constituency saw Demirel’s gutless attitude as indignity, and as a result his party broke up. From that moment until the end of his political career, Demirel never won enough votes to come to power alone. Yet, in the late 1970s, the fractured political landscape allowed him to become a prime minister again, at the helm of a coalition government. In the circumstances of the day, Demirel was ready to do whatever the army liked, edging even closer to the militarist mind-set than in 1971. The policies he favored on Kurds, Alevis, Armenians and communists were as tough and ruthless as the military’s. By 1980, the Turkish streets were already a bloodbath. Scores of people were killing each other on a daily basis.

Only on the issue of Islam, Demirel was softer than the army. He was reluctant to implement the tough secularist policies the military was pushing. He knew that the moment he yielded, his electoral support would nosedive below 10%. No matter how hard he tried, Demirel failed to please the military, the one and only boss of Turkish politics. He was overthrown for a second time on Sept. 12, 1980. The junta imprisoned Demirel and the other political leaders on an island and shut down all political parties.

When democratic politics were restored in 1983 under Western pressure, the Turkish military set up two puppet parties, one with a rightist and the other with a leftist front. It installed a retired general at the helm of one and a retired governor at the helm of the other. Subsequently, the formation of a liberal-looking party was also allowed, again under Western pressure. The party was headed by an economy bureaucrat who advocated free market liberalism, Turgut Ozal.

For the Turkish military, “political liberalism” was an outright enemy. Intellectuals who advocated that ideology ended up in prison. But capitalism free of political liberalism was fine. Even though the military despised liberal democracy, it was a pro-Western army. It had no objections to the economic system of the West, the free market.

An ardent Menderes fan in his youth, Ozal built his election campaign solely on an economic agenda, but still won the 1983 polls. The leader of the September 12 coup, Gen. Kenan Evren, had openly backed the party of his retired fellow general, issuing calls on the people to vote for that party in television addresses. Yet, the people voted overwhelmingly for Ozal.

In his first two years in power, Ozal made no move for political reforms. He devoted all his efforts to liberalizing the Turkish economy. And he succeeded. The economy grew substantially, giving birth to a brand-new entrepreneur class. The army-controlled old guard in Turkish business, who were incapable of exporting any goods and used to do business within the confines of tariff walls, was sidelined by an export-oriented, Ozalist business class.

As restrictions on imports disappeared, Turks gained access to high-quality foreign goods. Prior to Ozal, the sale of foreign goods had been prohibited. Turkish consumers were supposed to only buy Turkish-made goods. In the absence of competition, those goods were low-quality and expensive. As a result, an incredible black market and a contraband mafia had thrived in Turkey in the pre-Ozal years. Bureaucrats turned a blind eye to the mafia in return for bribes on which they built fortunes. Scores of mafia gangs had mushroomed only on the black market for foreign spirits and tobacco and waged deadly turf wars against each other. Under Ozal, those networks were eradicated.

Drawing on the stability and economic progress he secured, Ozal was re-elected in 1987. From that moment on, he began to argue that “economic liberalism will be lame without a political leg,” starting a confrontation with the military. Ozal favored a truly Western-style, liberal democratic system and was not gutless like Demirel. He began uttering some taboo-breaking words: “We should resolve the Kurdish question through freedoms and democracy. We could discuss a federation with the Kurds” or “What if we officially recognize the 1915 Armenian genocide and face up to our past?” Ozal was a liberal who saw communism as nonsense, yet he advocated the abolition of the Turkish penal code’s Article 141 and 142, which banned communist ideas. He disproved of jailing Marxist Turkish writers and even struck friendships with some popular figures among them. Thanks to his attitude, a significant number of Marxist intellectuals in Turkey turned to liberalism. Similarly, Ozal opposed political Islam and Kurdish nationalism, but advocated free expression of their ideas. Thus, Islamic writers and Kurdish intellectuals also grew fond of him.

In 1988, Ozal became the target of an assassination attempt as he sought to move Turkey from military tutelage to a liberal democratic regime. The gunman was an ultranationalist militant who had worked for the Turkish Gladio in the 1970s. Ozal narrowly escaped death. The ensuing investigation was marked by bizarre developments and ended inconclusively. The Turkish judiciary had covered up a murder attempt at the country’s prime minister himself. It did so because the gunman had received his orders from no one else but the deep powers that pulled the strings of the Turkish state behind the scene. “I managed to become the head of the people, but I could not become the head of the state,” Ozal told his son later. Ozal saw the assassination attempt as a warning by the military and abandoned his reformist efforts for a while, focusing again on the economy.

In late 1989, Ozal was elected president and took up anew his advocacy of liberal ideas. On the 30th anniversary of the 1960 coup that had sent Menderes to the gallows, he held a state ceremony to move Menderes’ grave to a special spot in Istanbul. “It’s time for the military tutelage to end,” he said in a speech on May 27, 1990. As a result, the Turkish establishment stepped up efforts to discredit Ozal. Unfortunately, the Turkish media was largely under the control of the military tutelage powers that Ozal complained of. The majority of Turkey’s most popular journalists were of a militarist and Kemalist mind-set. While never criticizing the military, they called Ozal a “dictator,” regardless that even the attempt on his life had been covered up.

The same pro-military media employed similar tactics against Erdogan in the 2000s. They backed a military coup to topple the democratically elected premier.

Ozal died suddenly of a heart attack in 1993 after constant confrontations with the military tutelage regime since 1990. For the majority of the Turkish people, Ozal was killed by the “deep state.” For many years, his death was never investigated, but recently a prosecutor reopened the file and concluded that Ozal had been poisoned. The Turkish courts are currently hearing the case.