Is a Power Struggle Brewing Between Erdogan and Gulen?

A major struggle between the two most important players in Turkish politics could be on the horizon. 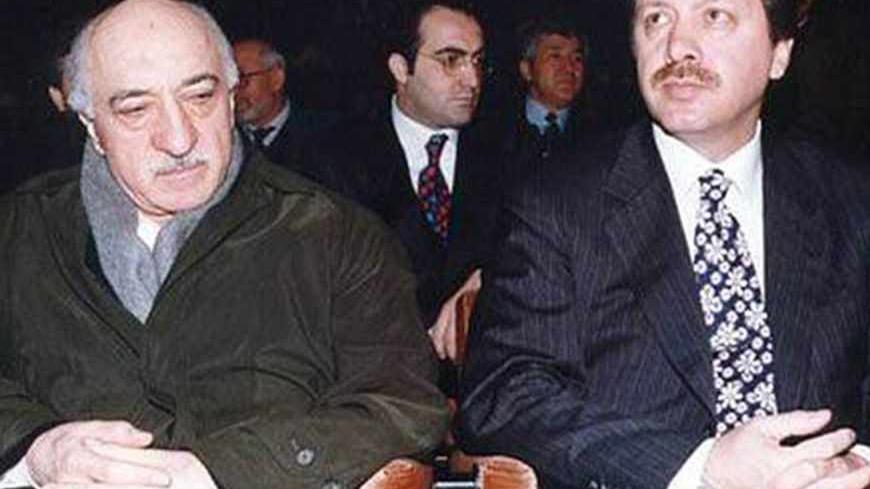 Fethullah Gul with Recep Tayyip Erdogan at the Intercultural Dialogue Symposium in 1998. - fgulen.com

Today, this question takes precedence in Turkish politics: What will New Turkey be like? In today’s Turkey there are two key political actors who have extraordinary potential to enact change. Any foreign reader, politician or intellectual who wants to understand the New Turkey has to grasp these two actors' mindsets. All other analyses on Turkey are bound to be futile and meaningless.

The first actor is the Justice and Development Party (AKP) under Prime Minister Recep Tayyip Erdogan. The second is "The Service," a movement under the leadership of Fethullah Gulen, a man of religion currently living in the US. This Islamic movement calling itself The Service is known in Western circles as the Gulen Movement. In Turkish media it is called “Cemaat,” meaning the Community or Congregation. The Gulenists don’t like the label “Cemaat,” though it is very much in vogue in Turkey.

Why is the second most prominent political actor of New Turkey, after the AKP, an Islamic faith community, not another political party? Why are Western journalists and academics specializing on Turkey trying to determine Fethullah Gulen's views in Pennsylvania instead of the main opposition leader Kemal Kilicdaroglu? Some experts go as far as saying that Erdogan’s strongest rival is Gulen. There are many academics who insist that the struggle for political power in Turkey is between the Erdogan government and the Gulen Movement. If we accept what these experts say as valid, a bizarre and absurd New Turkey is in the cards. How is it possible in a civilized country, where one assumes power through democratic means via free elections, that the rival of a political party is a religious community? Shouldn’t it be a contest between political parties to become the ruling political power of the land? Isn’t any other contest illegitimate in terms of democracy?

In short, during the transition from Old Turkey to New Turkey, there is a grotesque, hard-to-decipher view of Turkey. Over the past few weeks, the most discussed issue in Turkey has been Erdogan-Gulen relations. It started with articles from both sides criticizing each other in rival newspapers close to Gulen and Erdogan. Polemics grew. Then, the Journalists and Writers Foundation (GYV), an organ of the Gulen Movement, issued an 11-article communiqué full of strong innuendos against the Erdogan government. It said that Gulenists were being purged from the Turkish bureaucracy and judiciary.

Deputy Prime Minister Bulent Arinc said the accusation was misguided, that they liked and respected Gulen. Arinc, the number two man of the Turkish government, referred to Gulen as “Honorable Learned Master” [Muhterem Hocaefendi], which in Turkish is the highest level of respect and stature. But he also said that Erdogan was the man to govern the state, and the AKP was sole master of the state. Arinc stressed that civil servants must heed the orders of a democratically elected civilian government.

The innuendo-laden shadowboxing of the past two years between the pro-Erdogan and pro-Gulen camps has for the first time turned into a public debate. Both sides still use refined and polite language, but are making their positions clearer. Before going into the examples of this critical political debate that is shaping today’s Turkey, it will be useful to look into the background of this relationship and learn a bit about The Service and Gulen.

Gulen, the most powerful and charismatic man of religion in Turkey, was born in 1941 in the deeply conservative Anatolian city of Erzurum. According to the records of the official Directorate of Religious Affairs, Gulen is a retired preacher and imam.

He began his political activities and his religious profession in 1963 in his birth city. He joined the Association to Combat Communism and participated in anti-communist activities. Next year, in the city of Edirne near the Bulgarian border, alongside his official duties, he initiated private meetings that formed the foundation of today’s movement. But it was his activities in coastal Izmir, the country's most secular city, that attracted attention to Gulen. Gulen, who was appointed as an official preacher to Izmir, chose the city as the central base of an Islamic network he was establishing in all the cities of the Aegean region. Some found his selection of the most secular and Westernized city of Turkey to begin an Islamic network as a reflection of his defiant nature. Gulen always sought out challenges instead of retreating from any hardships he faced throughout his life.

The soldiers who staged the March 12 coup jailed this emerging charismatic preacher. He was released after seven months and acquitted in 1974. In 1975, the young preacher decided to go beyond the boundaries of Izmir and the Aegean region, and began a series of lectures on the Quran and science, Darwinism and the golden generation of Islam in all cities of Anatolia. There was an upsurge in the number of his disciples. Gulen was aware of the importance of education and mass media in the modern world. In all his lectures, he emphasized the need for Muslims to fortify themselves in education and media. In economy, he favored the free market system over statism. He paid much attention to nourish a generation of Muslim entrepreneurs and businessmen.

Toward the end of 1970s, Gulen began publication of his first periodical, Sizinti, meaning penetration and signifying penetration of sacred truth into secular minds. Gulen himself was writing the lead articles of the periodical. The widely-read Sizinti was distributed by hand in Anatolia. Gulen's dream of an Islamic network Gulen was expanding by the day.

After the coup of Sept. 12, 1980, the Turkish military again went after Gulen. An arrest warrant was issued, and Gulen immediately took evasive action, moving from town to town and taking refuge with friends and relatives. He resigned from his preacher post on March 20, 1981 and continued as an independent man of religion.

Gulen supported the liberal Turkish statesman Turgut Ozal who came to power in 1983 elections. Ozal responded by letting Gulen carry on undisturbed. Gulen, still committed to media and education, continued to publish new periodicals and open private tutoring halls. In 1989, he gave his first sermons in Turkey’s intellectual and financial capital, Istanbul. It was time to conquer Istanbul.

According to testimonies of some who left the Gulen Movement, it was in 1980s when the Gulenist youth began to penetrate the civil servant ranks. According to accounts of former Gulen disciples, the youth trained by the Gulen network were especially placed in the police, intelligence and judiciary services. Gulen was said to pay particular attention to intelligence services. Gulenists in state intelligence agencies regularly conveyed insider information to the preacher. The Service has always rejected these allegations, but now the Gulen Movement complains that their followers in the civil service are being purged. In response, they are reproaching Erdogan on the issue. It seems that as the Gulen Movement is freed from the pressures of the former Kemalist regime, they may opt for a policy of transparency instead of constant denial.

In 1990s, the Gulen Movement was supported by Prime Minister Tansu Ciller who followed Ozal. During this period, Gulen opened up to the world by establishing schools in many countries while frantically increasing the number of tutoring halls, newspapers, TV channels and financial institutions in Turkey. But after the Feb. 28, 1997 coup, the army again went after Gulen. This time, the Turkish military was very tough. They broadcast on TV bogus cassettes of Gulen. The army said Gulen was a major Islamic threat and basically announced an intention to eliminate him. Gulen, citing health problems, went to the US and settled in Pennsylvania. During this time, scores of court cases were brought against Gulen, but in 2008 he was acquitted in all of them.

In 2003, charismatic Recep Tayyip Erdogan, who had nothing to do with the Gulen Movement, but had his own religious identity, became prime minister. This was the beginning of a new era for the Gulen Movement. Kemalists and ultranationalists continued their campaign against Gulen, but Erdogan always stood by Gulen and protected his movement, allowing them to operate in civil society. Gulen supported Erdogan against the military. In the two major legal cases, Ergenekon and Balyoz, that wiped out the military’s power in politics, Gulen adopted an uncompromising position. His media outlets were even tougher than Erdogan’s against the army. The military reacted by claiming that the Gulenists in the police and the judiciary were manufacturing fallacious charges.

Now we have reached the point where the pro-Erdogan and pro-Gulen forces that had once jointly struggled against Kemalist military tutelage have to decide whether they are going to fight each other. Will they fight for political power, or will they reconcile? Do the Gulen people want their own bureaucratic tutelage to replace the military tutelage? Or is Erdogan determined to totally purge Gulenists from the state? This is what the Turkish political agenda will be all about in days ahead.