Is Gulen Movement Against Peace With PKK?

The Gulen Movement in Turkey is not against the peace process with the PKK, but is not on its bandwagon either. 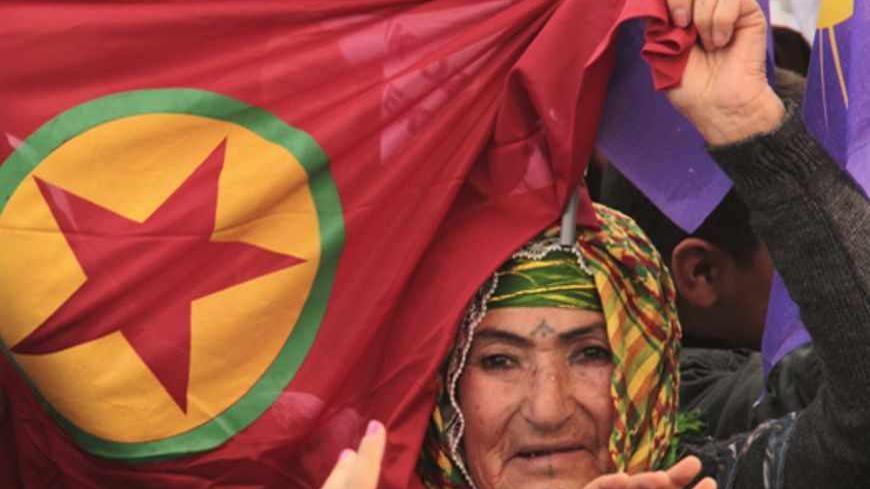 Turkish-Kurdish woman waves a PKK flag during a demonstration in support of Syrian Kurds, in the southeastern Turkish town of Nusaybin, near the Turkish-Syrian border, Jan. 26, 2013. - REUTERS/Sertac Kayar

One of the frequently discussed issues in contemporary Turkey is the political influence of “The Gulen Movement,” or the religious network inspired by the teachings of Fethullah Gulen, Turkish Muslim scholar and preacher who has been living in Pennsylvania since 1998. While speculation about the movement includes far-fetched conspiracy theories — such as that Gulen is a “CIA agent” or “crypto Christian” — almost all observers agree that the movement needs to be taken as a serious political force in Turkish affairs.

More recently, many have wondered where exactly the movement stands with regard to a key issue in Turkish politics: The “peace process” between the state and the Kurdistan Workers Party, or PKK, an armed and outlawed group considered as a terrorist organization by not only the Turkish government but also most of its Western allies. The AKP (Justice and Development Party) government that initiated this controversial process with the PKK’s jailed leader, Abdullah Ocalan, is in need of political and moral support, and whether it gets this from the Gulen Movement, in addition to the AKP’s loyal conservative supporters and peacenik liberals, is really important.

Before delving into the answer, perhaps some background information might also help: Comparing the AKP and the Gulen Movement can be in fact a bit misleading, because one is a political party, the other is a religiously-inspired civil community. Moreover, the voters of the AKP (literally half of Turkish society) most certainly include many, if not most, followers of Fethullah Gulen. In fact, the movement should be considered as the most powerful (and arguably most modernized) of Turkeys’ numerous religious communities, which together make up “the religious conservatives” whose natural political choice is lately the AKP.

Yet, it has also been proven that the Gulen Movement, which has often been a strong ally of the AKP leadership in the past decade, has taken different positions on various issues. To make a broad generalization, the movement has been more dovish to the West and Israel, but more hawkish against the “Turkish deep state” and the PKK. The latter stance has been also combined with the allegations that the Gulen Movement has a strong presence within Turkey’s police forces.

That is why the movement’s take on peace with the PKK has been a curious question. On Jan. 8, soon after the “peace process” was announced by the government, Fethullah Gulen, from his residence in rural Pennsylvania, gave the first and most definitive answer by being supportive. “There is benefit in peace,” he said to a group of followers, reminding a saying (hadith) of the Prophet Muhammad and his peace with his own enemies. He added that nations might need to accept some bitter peace agreements, as far as “the national pride” is not totally overrun. Today’s Zaman, a publication backed by the Gulen Movement itself, authoritatively interpreted the meaning of this statement: “Islamic scholar Gulen backs peace talks between government and PKK.”

Since then, however, writers in the Turkish media who are known (or believed) to be members of the Gulen Movement have raised critical opinions about “the process,” as it is called in short in Turkey these days. PKK militants are leaving Turkey and it is fine, they argue, but what if the PKK grows more powerful and more militant over time? Does the government really have a comprehensive plan, they ask, or is it being duped by the PKK? In particular, two columnists who write for the daily Taraf, Emre Uslu and Mehmet Baransu, believed to be members of the Gulen Movement, have written a series of critical pieces. They have, in particular, targeted the Turkey’s spy agency MIT, confirming the claims that there is a tension between the allegedly pro-Gulen police security and the MIT, who is loyal to Prime Minister Recep Tayyip Erdogan.

To get a better picture, I directly posed the question, “Is the Gulen movement against the peace process,” to a senior figure in the movement, who spoke on the condition of remaining anonymous. As a regular visitor to Gulen’s residence and an executive in one of the movement’s top organizations, he said,

“Hocaefendi [“the teacher,” the respectful term his followers use to refer to him] said ‘there is benefit in peace’ and he never backed from that. That, in other words, is the cornerstone of our approach. But we also have reservations. Hocaefendi believes that while peace with the PKK is a good initiative, the state should also have Plan B, C, D and even E. Because he thinks that the PKK is not that trustable, and that there are ill-willed powers in the region which might interfere in the process.”

When I spoke to Emre Uslu, the Taraf columnist who is often considered one of the voices of the movement (although both him and the movement deny this), I found a similar tone:

“If the peace process can reach its stated goal, which is the permanent disarmament of the PKK, then this would be wonderful. Both Erdogan and Hakan Fidan (head of the MIT) should get Nobel Prizes for that. Yet, the PKK has preconditions such as a constitutional reform, but Turkey’s constitutional process cannot be given as hostage to the impositions of an armed group.”

These comments, along with similar statements in the Turkish media, imply that the Gulen movement is not against the peace process, but is skeptical of its success and critical of its methods. This means, probably, that Erdogan will not find the movement an adversary in this process, but will not get its unconditional support either.

And in general, the movement and the AKP will probably remain as they have been in the past three years: Two separate powers with overlapping values and goals (such as a powerful, Muslim, neo-Ottoman Turkey), but also some conflicting interests and views. The surprise visit Bulent Arinc, the second man of the AKP Cabinet after Erdogan, made to Gulen’s residence on May 17, 2013 — during Erdogan’s meetings with US President Barack Obama — was apparently an effort to underline those commonalities and tone down the differences. After all, “the party” and “the community,” as they are called in short, have enough in common to be able to agree to disagree on what is not common.

In my previous piece, I had condemned Turkey’s main opposition the Republican People's Party’s (CHP) “irrational and immoral stance on Syria.” Al-Monitor contributing writer Tulin Daloglu kindly disagreed and reminded us that Erdogan uses a “negative and vulgar rhetoric” as well.

That is certainly right: Yes, Erdogan is often negative, vulgar and aggressive, like all other leaders in current Turkish politics. Yet, my condemnation of the CHP was based on not any political tone, but these three specific points:

Finally, I must disagree with Daloglu’s comment that the CHP’s base “in general holds secular and liberal views.” That base is secular for sure, but hardly liberal. In fact, the term I prefer for the typical CHP voter is “secular illiberal.”

Mustafa Akyol is a contributing writer for Al-Monitor's Turkey Pulse and a columnist for Turkish newspapers Hürriyet Daily News and Star. His articles have also appeared in Foreign Affairs, Newsweek, The New York Times, The Washington Post, The Wall Street Journal and The Guardian. He is the author of Islam Without Extremes: A Muslim Case for Liberty. On Twitter: @AkyolinEnglish