The Looming Power Struggle Between Erdogan and Gulenists 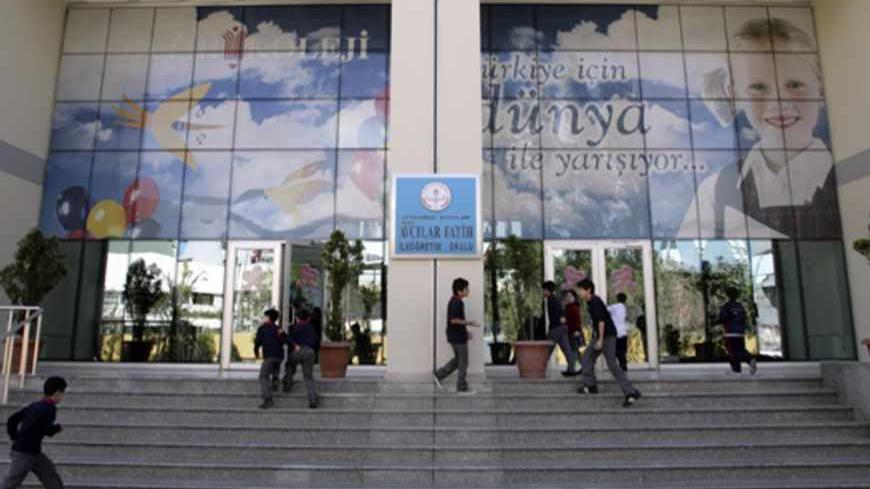 Children play at the garden of Fatih College in Istanbul, April 16, 2008. The 640-pupil school is run by followers of Fethullah Gulen, a Turkish Muslim preacher who advocates moderate Islam rooted in modern life, and whose teachings have inspired millions of Turks to forge a powerful socioreligious community active in publishing, charity and above all education. - REUTERS/Osman Orsal

When Turkey’s prime minister, Recep Tayyip Erdogan, traveled to Washington for crucial talks with US President Barack Obama on May 16, many wondered whether he would succeed in persuading the US leader to take a tougher line on Syria. Yet, there was another big question hanging in the air. Would Erdogan make time to meet with Fethullah Gulen, Turkey’s most influential Sunni cleric, who lives in self-imposed exile in rural Pennsylvania?

Tensions between Erdogan (a fellow imam) and Gulen have been simmering for some time. Yet, as the rift deepens so, too, has speculation about a protracted power struggle in the run-up to nationwide municipal elections that are meant to be held in March 2014. The elections are viewed as a litmus test of Erdogan’s unassailable popularity and their outcome will shine a light on his chances of becoming Turkey’s first popularly elected president when Abdullah Gul steps down in August 2014. Gulen, who commands a global empire of media outlets, charities, businesses and schools, can sway his followers either way.

In the event Erdogan did not meet with Gulen, he sent his Deputy Prime Minister Bulent Arinc as an emissary instead. Speaking to reporters in Washington on May 18, Erdogan said, “We have an old relationship based on friendship and brotherhood. The aim of Deputy Prime Minister Bulent Arinc’s visit [to Gulen] was to dispel negative rumors and gossip.”

The meeting came just days after Gulen rebutted accusations that he had targeted Erdogan in a recent sermon in which he railed against the evils of arrogance.

Indeed, both sides seem eager to paper over the cracks. Yet, it is unlikely that their differences will disappear anytime soon. “Gulen is not the Dalai Lama, he is extremely tough,” commented one of his followers. Maybe so, but the Gulen’s strictly pacifist brand of moderate Islam is upheld as a countervailing force to Sunni extremism across much of the globe. Since 2006, Russian authorities have shut down a string of Gulen-affiliated schools on the grounds that they were acting as CIA fronts.

Gulen’s followers regard themselves as a civil society movement, not an Islam-based network. They recently rebranded themselves as the “Hizmet” service that is extended across the globe.

In the United States, the Hizmet runs more than a hundred charter schools. It is now branching out into the media. From shiny new studios in suburban New Jersey, Your Family Network, Ebru TV, a Gulen-affiliated channel, airs Turkish miniseries lauding the virtues of faith and family life, all dubbed in English. In far-flung corners of Africa, selfless Hizmet disciples teach Turkish and the latest computer science, while others heal the sick and feed the poor.

The Gulenists believe in good relations with the West. Their piety and nationalism are on a par. Determinedly pragmatic they have sought to remain on the right side of the Turkish state. And even their harshest detractors concede that their schools have embellished Turkey’s image abroad. But a lack of transparency continues to feed suspicions about the Hizmet’s intentions and most of all within Turkey’s fiercely pro-secular army. Soon after they unseated the country’s first Islamist-led government in 1997, the generals embarked on a massive purge of the Gulenists. Gulen took refuge in the United States and was tried in absentia by a special state security court on thinly documented charges of seeking to overthrow Turkey’s secular order.

He was cleared in 2006, some two years after Erdogan’s Justice and Development Party (AKP) swept to power. A fellow imam, Erdogan sprang from Turkey’s more conservative Islamist Milli Gorus (National View) movement. Ideologically speaking, the pair makes unlikely bedfellows. But in the early days of AKP rule they teamed up against their common foe, the army. Reams of incriminating documents — which purportedly proved that the army was planning to overthrow Erdogan — were published by Taraf, an independent liberal daily newspaper, but also by the pro-Gulen media. These were used to jail hundreds of generals, currently on trial in the controversial Ergenekon case.

As the Hizmet put down roots, it began behaving — in the words of an analyst who follows the movement very closely — “like a state within a state,” wielding its newfound clout to “pursue perceived enemies across the board.” Its targets included several journalists and a former police chief who wrote books that sought to document claims of Hizmet infiltration of the government.

All were jailed in connection with the Ergenekon case sparking accusations that the Hizmet was pursuing revenge, not justice. The tipping point came when an Istanbul prosecutor summoned Hakan Fidan, Turkey’s spy chief, for questioning over links to rebels of the separatist Kurdistan Workers Party (PKK). An incensed Erdogan hit back with a law that renders the prosecution of any intelligence official subject to government approval. There followed vows to shut down thousands of prep schools, many of them run by the Hizmet. Assorted bureaucrats and police officials said to have Hizmet connections are on the block. When Erdogan alluded to “a lack of communication” between the police force and the intelligence services after the twin car bomb attack that ripped through Reyhanli on May 11, some commentators suggested that this was another swipe at the Gulenists.

Rehyanli’s police chief has since been sacked. Fidan’s men have not been touched.

Gulen’s followers discard claims of Hizmet infiltration as outright lies: “The sole purpose” of which, in the words of a Hizmet spokesman, “is to discredit a movement that loyally serves Turkey’s interests.”

Either way, the effects of Erdogan’s peace overture should become apparent in the coming days. Will the Hizmet linked media stop criticizing Erdogan’s latest Kurdish initiative or his interventionist Syrian policy? Will they support AKP candidates in the municipal polls and most critically in Istanbul? And what about Erdogan’s presidential dreams? Might the Hizmet rally behind a rival candidate who would also enjoy the support of the main opposition parties? If so, Erdogan could be in trouble. But only if that rival candidate is the highly popular President Gul. And sources close to the president tell Al-Monitor that he has absolutely no interest in being drawn into a fight.

Meanwhile, Anatolian entrepreneurs who are a vital financing source for Hizmet schools are said to be upset by the feud. With the stakes so high, and with no obvious winner, most analysts predict that a deal will be struck.

Amberin Zaman is an Istanbul-based writer who has covered Turkey for The Washington Post, Los Angeles Times, The Daily Telegraph and The Voice of America. A frequent commentator on Turkish TV channels she is currently the Turkey correspondent of The Economist, a position she has held since 1999. On Twitter: @amberinzaman