Why are Gulenists hostile toward Iran?

There seems to be a blind spot in the excited discussion surrounding the failed coup in Turkey: the long and complex enmity between Iran and the followers of exiled Turkish cleric Fethullah Gulen. 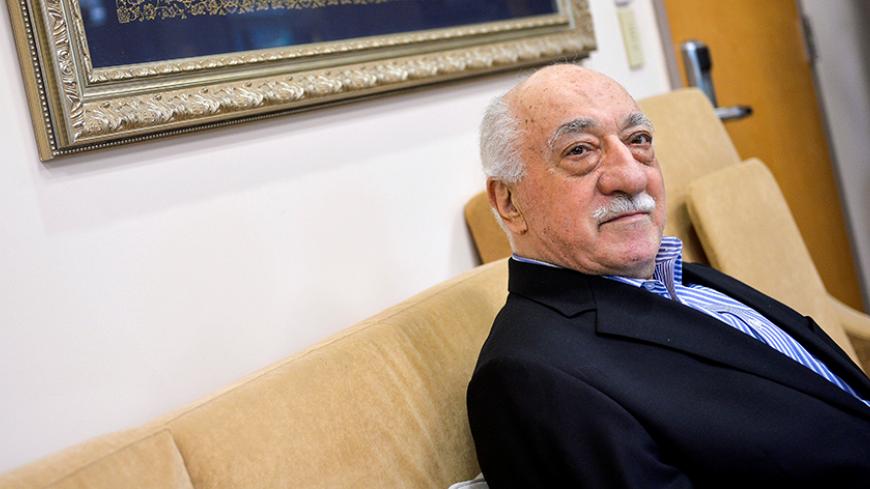 ISTANBUL — Clues about who may have been behind the coup attempt in Turkey increasingly point to US-based Turkish cleric Fethullah Gulen and his network of supporters. Yet the big picture will remain blurred until the movement’s anti-Iran stance, too often neglected, is considered.

Gulen’s anti-Iran posture is first and foremost rooted in ideology, as he hails from a tradition that views political Shiism as a threat. In a 1997 interview with Yeni Yuzyil, Gulen clearly laid out this tendency when he criticized “the export of a sect and fanatical Islamic understanding in the name of religion and Islamic revolution,” adding that the Iranians “uphold their own sect and interpretations before the true religion.” Gulen also pointed to “Persian expansionism in the region” while referring to Iran’s “historic rivalry with [Turkey]” as a “certain danger.”

Gulenists have over the years used Iranophobia as a tool in their power struggle with the ruling Justice and Development Party (AKP). Turkish intelligence (MIT) chief Hakan Fidan, a close confidant of President Recep Tayyip Erdogan, has been a major target, chiefly over the peace talks with the militant Kurdistan Workers Party (PKK). Gulen views the PKK as a threat to his network’s existence, especially in Turkey’s Kurdish-dominated southeast. As such, the first clash between Gulen and then-Prime Minister Erdogan — perhaps unsurprisingly — emerged over the Kurdish question in February 2012.

Fidan was called to give testimony on the so-called Oslo negotiations, the first series of talks between the MIT and the PKK in 2008-2009 that eventually led to the now collapsed peace process. Upon Erdogan’s advice, Fidan chose not to testify, since part of the probe was led by a prosecutor with alleged Gulenist links. Of note, the prosecutor later fled Turkey after being suspended over those links.

From this point onward, Gulen-affiliated media outlets began to openly target Iran. These efforts included allegations that Tehran supports the PKK, prompting the Iranian ambassador to Ankara to write a letter to Zaman in protest. The Gulen-linked press extensively circulated a 2013 Washington Post article that alleged that Fidan had handed over to Tehran the names of 10 Iranians who were working with Israeli intelligence agency Mossad. Fidan was also accused of having contacted an “Iranian agent” in the clandestine Gulenist-led “Selam-Tevhid” investigation in 2010-2014 that centered on an allegedly Iran-linked militant group active in the 1990s. In 2014, a prosecutor ordered the detention of those in charge of this probe, arguing that the case was essentially reinvented to justify a wiretapping scheme. Police officers linked to Gulen were accused of having wiretapped 2,500 figures for more than three years as part of this operation — including members of Turkish Shiite associations, journalists, ministers, MIT and even Erdogan. The prosecutor’s indictment, which was completed earlier this year, implicated Gulen-linked police chiefs, prosecutors and judges and labeled the whole thing a “conspiracy.” It further claimed that the target was not just the Kurdish peace process, but interestingly, also the 2010 nuclear fuel swap initiative with Iran that was jointly led by Erdogan and Brazilian President Luiz Inacio Lula da Silva.

The latter point is perhaps not surprising. Al-Monitor spoke with Hakki Uygur of the Ankara-based center for Iranian studies. He recalled a high-level diplomatic meeting in Tehran in late 2014, saying that a Gulen-affiliated Turkish diplomat — who is still in active service — was behind an anti-Iran communique that was only thwarted after Erdogan intervened. In Uygur’s telling, this incident indicates how Gulenists “tried to sabotage bilateral relations [with Iran] using their own diplomats.”

The orthodox Sunni Gulenists appear to have systematically used Iran as a scapegoat in their efforts to deal with the heterodoxy posed by Turkey’s Alevi community. Most observers were surprised by the Turkish government’s July 23 decree ordering 13 Alevi associations be shut down. However, according to pro-Kurdish former Peoples' Democratic Party lawmaker and Alevi-Bektasi Federation founder Ali Kenanoglu, these were in fact Gulen-linked associations. Kenanoglu told Al-Monitor that they were founded in cooperation with the AKP, and that their aim was to “assimilate” the Alevis.

Indeed, the head of one of these Alevi associations claimed in 2013 in Gulen-linked Zaman that 700 Alevi leaders had traveled to Iran in 2010-2013 and met with Iranian Supreme Leader Ayatollah Ali Khamenei. Kenanoglu denied the allegations and told Al-Monitor that the Gulen-linked associations were formed “to make statements like these.” In Kenanoglu’s telling, their goal was to push the line that the “Alevis of Turkey cooperate with Iran and that they are organizing against Turkey with the support of Iran to create unrest.”

Ankara-based Iran researcher Bayram Sinkaya from Yildirim Beyazit University disagrees with the notion that the Alevi institutions were formed to counter Iranian influence. Rather, he told Al-Monitor, “Gulen’s move to influence Alevis may be evaluated as [an effort] to expand his base rather than balance Iran’s efforts.”

Last but not least, benefiting from the prevalent anti-Iran sentiment in the United States and Israel, Gulen has prolonged his self-imposed exile in Pennsylvania by siding with — and perhaps trying to influence — Washington and Tel Aviv’s policy toward Tehran. Indeed, in addition to targeting Iran as a means to undermine Erdogan, Gulenists appear to capitalize on their anti-Iran posture to forge good ties with the United States.

Gulenists seemed to play a key role in the initial efforts to take down Iranian-Turkish businessman Reza Zarrab, who is now detained in the United States over alleged violations related to the bypassing of sanctions on Iran. In December 2013, Turkish police and prosecutors allegedly linked to the Gulen movement spearheaded graft allegations against Zarrab and three Turkish ministers. The effort revolved around an allegedly Zarrab-mediated arrangement to bypass US sanctions on Iran by organizing Turkish payment of Iranian natural gas imports via physical delivery of gold. This controversy was eventually quashed by Erdogan, but his ministers resigned. As Walter Posch, Austria-based Iran expert at the German Institute for International and Security Affairs, told Al-Monitor, Zarrab was a “victim of his greed — him being Iranian came in handy.”

Iranian journalist Abbas Aslani told Al-Monitor that Gulen is perceived as an “agent of the United States” in Iran, and that his network is not allowed to set up schools in the country. Khamenei recently pointed to “intense speculation … that the coup was carried out with Americans’ planning and assistance.”

Given the increasing tension between Turkey and the United States over Gulen and especially after its recent rapprochement with Russia, Turkey’s path forward is something Washington needs to consider. As such, Gulen’s fate may ultimately influence the future relations of Turkey, the United States and Iran.