A firsthand account of just one of the many wiretapping cases that are happening in Turkey, where government corruption and Prime Minister Recep Tayyip Erdogan's obsession with the Gulen community is the primary cause of a massive abuse of public authority. 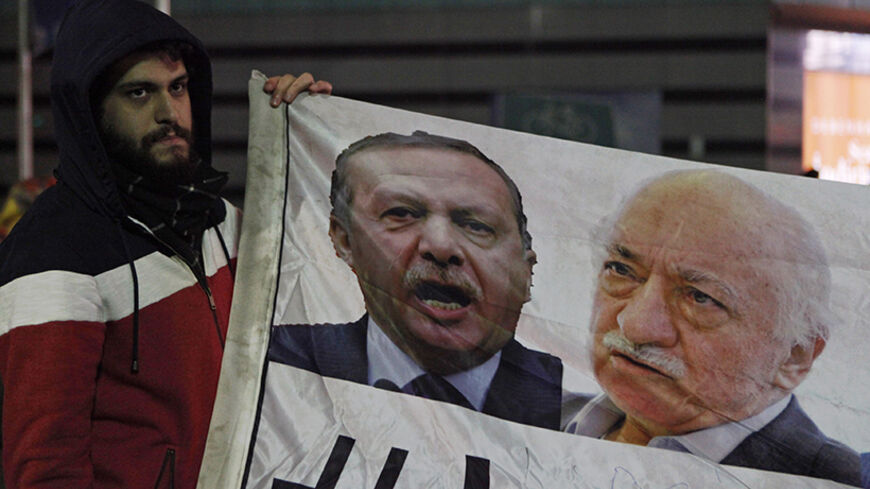 Are a conversation with a journalistic source, a phone call in which one is mentioned as “Turkish foreign policy expert” and an invitation for a Ramadan fast-breaking dinner sufficient grounds to be probed for belonging to a terrorist organization? Not in a normal judicial system. In Turkey’s highly politicized judicial system, however, they are.

A scandalous probe into a group linked to gruesome murders committed to foment conflict between secular and religious Turks back in the 1990s comes as the latest episode in the war between the ruling Justice and Development Party (AKP) and the religious community of Fethullah Gulen. This episode, however, has a slightly personal aspect for me.

I'm one of 2,280 people whose phone calls were wiretapped as part of the probe into the so-called Tevhid-Selam Jerusalem Army. I’ve been aware of this since February. But on July 22, I learned — while chasing news in the Gaza inferno — I had been investigated as a suspected “organization member” when prosecutors dropped the investigation of 251 people.

It turns out that I — suspect number 219 — had not just been a person of interest but a target of the probe. They not only wiretapped my two mobile phones but had agents technically and physically monitor me — that is, secretly film and bug me. Other suspects placed under similar surveillance include Prime Minister Recep Tayyip Erdogan’s advisers Mustafa Varank and Sefer Turan, National Intelligence Organization (MIT) chief Hakan Fidan, Foreign Minister Ahmet Davutoglu’s advisers Ali Sarikaya and Osman Sert, Justice Ministry counselor Adnan Boynukara, Turkish Public Television (TRT) newsroom chief Nasuhi Gungor, Anatolia News Agency Director-General Kemal Ozturk, TRT reporter Mehmet Akif Ersoy, Yeni Safak Editor-in-Chief Ibrahim Karagul, Syrian journalist Husni Mahalli and Independent Turkey Party chairman Haydar Bas. Most suspects in this motley crew would never meet, and some are even enemies. Fidan, a key figure in organizing and arming the Syrian opposition against the Iranian-backed Damascus regime, was accused of being an Iranian agent.

And here is how I landed in the net: On Aug. 31, 2012, the editor of Near East News, Alptekin Dursunoglu, had a phone call with Nureddin Sirin, the suspected leader of the organization, in which he mentioned that I had attended the Yesilpinar Peace Festival. Earlier, on July 28, writer Kenan Camucu recommended me to Fars News Agency’s Ismail Bendigeryan, who was looking for a foreign policy expert to interview. Then, on Jan. 9, 2013, I was wiretapped while calling a source in a bid to obtain information about the release of Syrian prisoners in exchange for the release of Iranians abducted by the Syrian opposition. Those three calls made me a suspect.

Subsequently, the decision was made on June 6, 2013, to wiretap both my mobile phones. The wiretapping ended on Dec. 3, 2013, and the records were to be destroyed. In the meantime, in one of my wiretapped calls, I spoke to a woman referred to as “Lady X,” who extended an invitation for a Ramadan fast-breaking dinner hosted by Channel 14. This call was grounds for the investigators to put me under physical and technical surveillance on Aug. 7, 2013.

In a scathing article, former prosecutor Ilhan Cihaner compared the probe to the “Six Degrees of Separation” theory, which says that everyone is six steps away from anyone in the world: “Starting out from one suspect, they were able to reach in three or four steps Hakan Fidan, the prime minister, the Palestinian leader and the Somali president. [US President Barack] Obama was only a notch away from becoming a suspect!”

The police's documentation of the probe starts with a description of Selam-Tevhid as a “terrorist organization responsible for the murders of [Turkish intellectuals] Ugur Mumcu, Muammer Aksoy, Ahmet Taner Kislali and Bahriye Ucok,” and then accuses the suspects of conducting espionage for Iran as part of a plan to install a regime based on the Shiite faith in Turkey.

The report, the outcome of three years of surveillance, fails to present any evidence to back up the accusations, while brimming with hostility against Shiites. It seems that people’s daily routines were distorted to look like criminal activity.

Following the government’s intervention in the probe in February, the new prosecutor established that wiretapping and surveillance orders were issued not only as part of the Tevhid-Selam probe, but also in the guise of procedures in the Ergenekon coup investigation and an al-Qaeda-related probe. He concluded the file contained inconsistencies and legal irregularities.

As a result, dozens of police officers were detained on charges that they falsified documents to target 251 people — mostly journalists, writers, bureaucrats, politicians, business people and civil society activists — as suspected members of an illegal organization and engaged in espionage by bugging 2,280 people, among them the prime minister and ministers. In protest of the detentions, the Gulen community initiated a sit-in outside Istanbul’s main courthouse, claiming that the government was seeking to cover up a case that revealed Iran had infiltrated Turkish state institutions, including the MIT and TRT.

A murky question pops up here: Why was a group tried and convicted of the murders of iconic secularists Mumcu, Ucok, Aksoy and Kislali suddenly re-emerged under the name of Tevhid-Selam?

Back in 2000, then-Interior Minister Sadettin Tantan said the murder cases, long protracted by the state, had been resolved, but doubts continued to linger. For instance, one of the convicts, Abdulhamit Celik, said his testimony had been obtained under torture and that he and his co-defendants had really been at his wedding in Istanbul on Jan. 24, 1993, when Mumcu was assassinated in Ankara. Eight people linked to the Selam newspaper were convicted of the murders, but the Turkish public remained unconvinced. The relatives of the victims also believe the details of the assassinations remain behind a thick smokescreen.

It turns out that police with ties to the Gulen community re-opened the file in the days after Fidan was appointed MIT chief in 2010 and Israeli officials made it clear that they mistrusted the new head of Turkish intelligence. The police started out by monitoring Nureddin Sirin, the former Selam publisher, after he made an anti-Israeli speech, as well as people around Sirin and anyone who happened to know them. They expanded the probe when a woman called Kamile Yazicioglu tipped them off that her husband, Huseyin Avni Yazicioglu, had links with Iran and was in contact with Fidan. However, the woman retracted her testimony later and a flash drive said to contain information exposing the network went missing. The Ankara leg of the investigation began in 2012 after Israel supplied the Turkish police with information about plots to target Israeli missions in Turkey.

According to Bulent Orakoglu, the former head of police intelligence, the murders and the subsequent incrimination of the Selam group had been orchestrated by the “deep state.”

Orakoglu lay out his suspicions in a recent Yeni Safak article: “Former Interior Minister Mehmet Agar said, ‘If one brick is pulled, the whole wall could collapse.’ State Security Court prosecutor Ulku Coskun said, ‘The state must be behind this. Should they give me a written order to shed light on the affair, the case can be resolved.’ Prosecutor Kemal Ayhan was found dead in his home and buried without even an autopsy shortly after he took over the case and said he was ‘making efforts to uncover the perpetrators.’ All this suggests the Turkish Gladio was behind the affair. The so-called Selam-Tevhid organization — set up by the Gladio as part of its strategy of creating, infiltrating and running front organizations to cover up its murders and assassinations — is being resuscitated today by the parallel structure [Gulen followers within the state] in an illegal and unlawful probe as part of an international operation against the government and the MIT, which seems to suggest that all this is a continuation of global attacks threatening our national security since the Feb. 7, 2012 [attempt to prosecute Fidan] and the Gezi Park protests.”

The case is yet another indication of how murky the waters in Turkey have become. It is part of the dirty war between the government and the Gulen community in which many disparate people have been smeared. The ugliness of the tit-for-tat, however, can conceal neither the government’s corruption nor the fact that the Gulenists, 10-year partners in all government sins, parted ways with the government because they were irked by the breakup with Israel, relations with Iran and the Kurdish peace process.