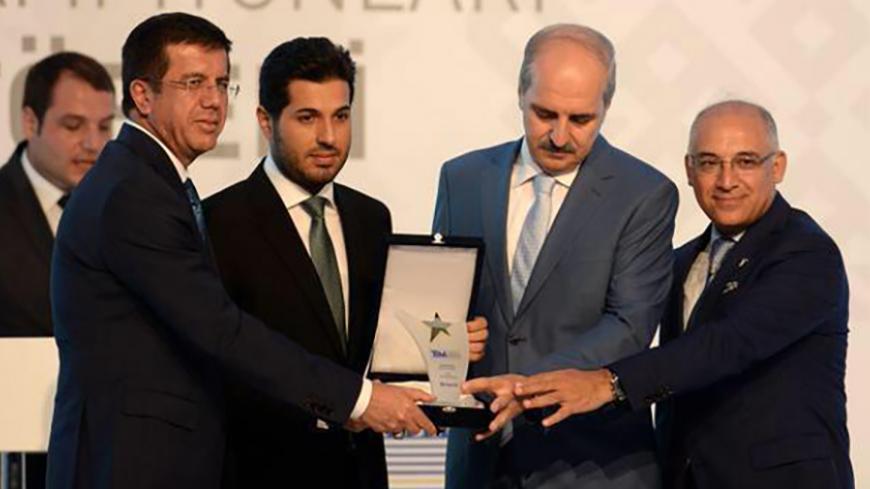 Iranian-born Turkish businessman Reza Zarrab received his country’s top exporter award June 21 from the Turkish Exporters Assembly (TIM), a pro-government business group. Zarrab received the award in the field of jewelry on behalf of his company, Volgam Gida. In the general exporters’ list, Volgam stood 13th — no mean feat for a company that started only a few years ago.

The award and Zarrab’s case have interesting implications for domestic Turkish politics, Turkish-Iranian relations and the talks over Tehran’s nuclear program.

Until late 2013, Turks knew Zarrab (identified as “Riza Sarraf” in Turkey) simply as a businessman and the husband of famous singer Ebru Gundes. Few people cared about his gold export business from Turkey to Iran and its critical role in undermining Western sanctions against Tehran’s nuclear program. The Justice and Development Party (AKP) government and Recep Tayyip Erdogan were only too happy to boost export figures and purchase cheap oil and natural gas from Iran.

Then came the Fethullah Gulen-AKP fight and the “17-25 December corruption probe." Pro-Gulen policemen and prosecutors who ran the investigation accused Zarrab of bribing prominent members of the ruling AKP government. Zarrab found himself in police custody — along with the sons of three Cabinet ministers. “Gas for gold” trade between Turkey and Iran, which one Al-Monitor article placed at $10 billion, became public knowledge. Another $14 billion allegedly got “lost” in transaction. Some Turkish media outlets put the total “undocumented trade” between Turkey and Iran at $90 billion in 2010-2013.

But as the AKP government gained the upper hand against Gulen in 2014, it killed the corruption probe and released Zarrab. Since then, AKP and its supporters in the media and business circles have tried to recast Zarrab as both hero and victim. For example, Sabah newspaper interviewed Zarrab after his release and prominently featured his allegations against Gulen-affiliated networks. The Iranian-born Turkish businessman claimed that police and prosecutors who handled his case promised to “sign his release papers” if he would confess that Erdogan had known about the bribes and “gas for gold.” Other media outlets hailed Zarrab for exporting goods and decreasing Turkey’s foreign trade deficit.

Yet, such attempts to improve the corruption suspect’s public profile have backfired. After the Turkish state returned the millions of cash it had impounded from Zarrab during the “17-25 December probe,” it also paid interest on them — offending Turks of all political stripes. Zarrab’s purchase of a private jet worth $58 million made an even bigger splash. As reports of his opulence grew, Zarrab and his bodyguards found themselves getting into scuffles with ordinary citizens who would heckle him in public.

The top exporter award created a similar buzz on Turkish social media. Many people made a big deal out of Zarrab receiving his prize from TIM Chairman Mehmet Buyukeksi, AKP Economy Minister Nihat Zeybekci and Numan Kurtulmus, deputy prime minister and AKP deputy chairman. Zarrab’s picture with two high-ranking members of the ruling party lent credence to the belief that the AKP was still in cahoots with Zarrab. Can Yilmaz, the brother of Turkey’s most famous comedian Cem Yilmaz, joked how Zarrab had beat his sibling to a higher spot on the Finance Ministry’s list of “top taxpayers” because Yilmaz came up 20,000 Turkish lira short (about $7,000).

An Istanbul-based foreign trade expert who has extensive connections with TIM told Al-Monitor that the June 21 award ceremony took place on President Erdogan’s urging. Speaking on condition of anonymity, the expert said Erdogan still orchestrates efforts to repackage Zarrab as a respectable businessman. “Zarrab’s exports used to be undocumented,” the source said, “so TIM has obeyed Erdogan’s command to put [Zarrab’s] gold and jewelry exports [to Iran] on the books to improve export statistics."

He added, “However, few people within the AKP and in the pro-AKP business community are comfortable about their association with Zarrab.”

Indeed, Hurriyet senior economic affairs columnist Vahap Munyar reported that many businessmen did not want Zarrab to attend the ceremony. They argued that AKP’s image of endorsing a person tainted with corruption allegations is bad for business as well as politics.

On June 24 in Yeni Safak newspaper, pro-AKP heavyweight Abdulkadir Selvi lamented that the award to Zarrab could be mistaken for a “joke.” Selvi joked that the party should erect Zarrab’s statue and use the pictures of Cabinet ministers whom he bribed on future campaigns.

So why would Erdogan push Zarrab into the spotlight?

The foreign trade expert had a theory: Apparently, the Turkish government has been promoting several Iranian businessmen of Azeri origins (Zarrab’s family hails from Tabriz) to create a cadre of pro-Turkish entrepreneurs in Iran. Such multimillionaires, goes the theory, would eventually buy political influence for Ankara in Tehran once it opens up to the rest of the world.

Whether that vision comes to pass depends on the fate of the nuclear talks in Vienna. The “17-25 December corruption probe" in 2013, especially the “gas for gold” scheme, had put Ankara on the hot seat with Western allies who were trying to impose financial sanctions on Iran to bring it to the negotiating table.

Jonathan Schanzer, a former terrorism finance analyst at the US Treasury Department and now a vice president for research at the Washington-based Foundation for Defense of Democracies, said there has been a “slight uptick in the gold trade [between Turkey and Iran], but nothing to indicate that ‘gas for gold’ would resume at previous levels.” Schanzer said the top exporter award to Zarrab raises concern “that the business and governmental ties between Iran and Turkey that paved the way for sanctions busting are still intact.”

But if there's a deal in Vienna, Ankara could get away with the “gas for gold” scheme and, as Schanzer conceded, “there will be a great economic benefit for [Turkey and Iran].” According to one estimate cited by Al-Monitor in April, the volume of trade between the two countries could climb from $13.7 billion in 2014 to $30 billion within two years if international sanctions against Iran are lifted.

For his role in that process, Zarrab’s journey from zero to hero to villain is bound to get more interesting.