The downfall of two Iranian tycoons

Iranian lawmaker Amir-Abbas Soltani told Al-Monitor that Iranian-Turkish businessman Reza Zarrab intentionally visited the US, knowing he would be detained, to avoid being arrested in Turkey and extradited to Iran. 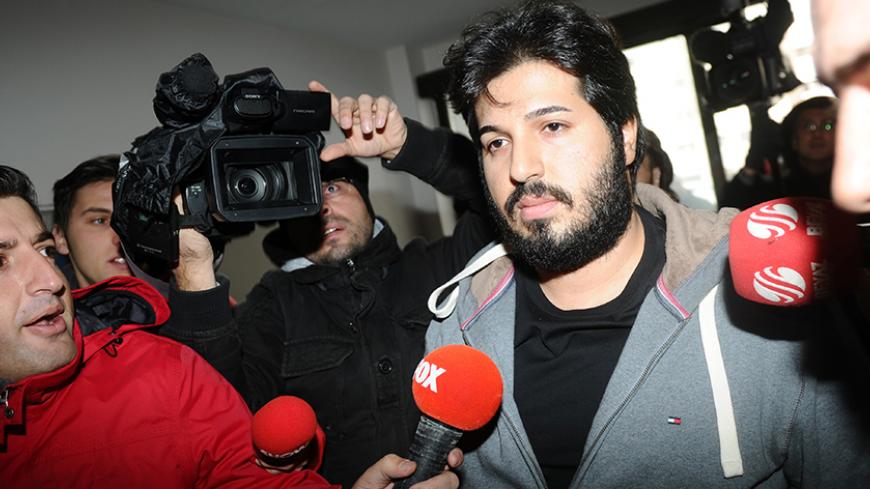 Detained businessman Reza Zarrab (C) is surrounded by journalists as he arrives at a police center in Istanbul, Dec. 17, 2013. - OZAN KOSE/AFP/Getty Images

TEHRAN, Iran — The Iranian tycoons Babak Zanjani and Reza Zarrab are now both finding themselves in dire straits. Zanjani, one of the most well-known magnates in Iran, has been sentenced to death for allegedly not paying back money owed to the Oil Ministry from oil exports he arranged under the sanctions era. Zarrab, an Iranian-born businessman who only years ago was exonerated of alleged bribery, corruption and being involved in a smuggling racket that involved several Turkish Cabinet members, is now in detention in the United States under money laundering charges, among other allegations. He was arrested in Florida on March 19 over an indictment filed in federal court in Manhattan.

In an exclusive interview with Al-Monitor, Amir Abbas Soltani, an Iranian lawmaker and a member of the parliamentary committee tasked with pursuing the Zanjani case, claims Zarrab traveled to the United States on purpose in order to get caught. Soltani said, “There is no difference between Zarrab and Zanjani. Plus, Zarrab is an important person, the key figure to this [Zanjani] corruption case.”

“Zarrab intentionally visited the US and surrendered himself based on a premeditated plan. Following Zanjani’s case in Iran, he sensed a lurking threat awaiting him. He thought he would be captured by Iranian officials if he stayed in Turkey,” Soltani told Al-Monitor.

Soltani added, “Zarrab sought a safe haven by going to the United States. Our judiciary officials were pursuing his case. The situation in Turkey wasn’t good for him as Tehran and Ankara’s relationship improved. If he were found guilty by Iran’s judiciary, based on our agreements with Turkey, he would have had to be extradited to Tehran.”

According to Soltani, “Zarrab knew that there is no extradition agreement between Iran and the US. That is why he decided to go to the United States. He is waiting to see when it will all blow over to and what will happen to Zanjani. If he [Zanjani] gets executed, Zarrab can deny a lot of the facts after Zanjani’s death.”

On April 27, Zarrab pleaded not guilty to four conspiracy charges, including bank fraud and money laundering conspiracy. These charges carry a maximum sentence of 75 years in prison. Zarrab had earlier declined to seek bail in Florida, where had been detained.

In Soltani’s telling, “Zarrab is a close confidant of Zanjani as well as a senior manager of his companies. They both established more than 70 companies, and many of them were administrated by Zarrab.”

The Iranian member of parliament further told Al-Monitor, “Zarrab often visited Iran before Zanjani’s arrest. He repeatedly sent a message to us that he had no relationship with Zanjani. But it is completely clear that he was connected to Zanjani and was one of his managers.”

Soltani told Al-Monitor that there are more than 30 charges against Zanjani and Zarrab, including "stealing the Iranian Oil Ministry’s money.”

He added, “Zanjani has been sentenced to death, but he doesn’t believe he will be executed. That is why he hasn’t taken his death penalty seriously.” Of note, the Iranian Oil Ministry’s lawyer recently suggested that Zanjani’s death sentence would be overturned if he returns the outstanding debt to the government. According to Soltani, “12,000 billion toman [$4 billion] belonging to Iran’s Oil Ministry is in the hands of Zanjani.”

For years, Zanjani transferred billions of dollars of Iranian oil revenues through a network of companies stretching from Turkey to Malaysia and the United Arab Emirates. At one point, he told an Iranian magazine that he had amassed a fortune of $10 billion.

Asked when Zanjani and Zarrab’s alleged scheme began, Soltani told Al-Monitor, “There was a connection and relation between Iran’s former government [led by President Mahmoud Ahmadinejad] and Zarrab. He had written a letter to the former governor of the Central Bank [of Iran].”

According to Soltani, “Four of Ahmadinejad’s ministers played a role in this case. They were the ones who gave Zanjani control over 12 supertankers.”

There is also speculation about Ahmadinejad’s relationship with Zarrab’s father, Haj Hossein Zarrab. One Iranian news outlet claims that during a meeting aimed at encouraging entrepreneurs in the northwestern Iranian city of Tabriz in 2007, the senior Zarrab submitted a proposal for the establishment of the SFK steel company to Ahmadinejad, and that the then-president accepted it at the same meeting.

Asked about one picture of the senior Zarrab next to an official of Ahmadinejad’s government, Soltani told Al-Monitor, “I haven’t reached a conclusion on Zarrab’s father’s relationship with Mahmoud Ahmadinejad.”

In response to why Turkish President Recep Tayyip Erdogan does not come to Zarrab’s aid, Soltani said, “How do you know that Erdogan hasn’t helped Zarrab? They don’t publicize these issues.”

Asked if Iran has asked the US government to extradite Zarrab to Iran, Soltani said, “Iran hasn’t requested this, but I’m sure [the Americans] would say their Supreme Court is independent, and that they can’t interfere. Thus, I believe it is really unlikely that they will help.”

Soltani added, “If Iranian officials had decided to investigate Zarrab sooner, the riddle of Zanjani would have been definitely solved by now. He seized the opportunity to distance himself from the hanging rope.”

Soltani concluded, “If the US cooperates with Iran, the loose end of Zanjani’s case will be tied. Zarrab is the key to [solving] this problem.”