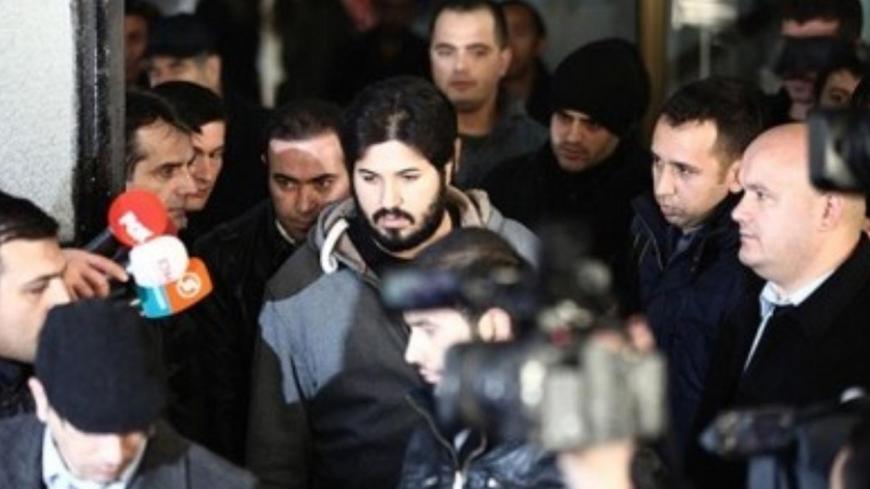 Iranian-born Turkish businessman Reza Zarrab, who has been accused of financial impropriety, is surrounded by journalists as he leaves a police station in Istanbul, April 20, 2014. - Dailymotion.com/Haberler

Al-Monitor readers may recall the June controversy in Turkey over a pro-government business lobby awarding a “top exporter” prize to Iranian-born Turkish businessman Reza Zarrab. Since then, opposition media outlets in Turkey have intensified their coverage of the allegations against Zarrab, a suspect in the infamous December 2013 corruption probe. The rumors about Zarrab could have serious repercussions for Turkey and Iran.

Zarrab’s 15 minutes of shame continued with a story in the Hurriyet newspaper. Apparently, the chief inspector of Turkey’s Ministry of Customs and Trade conducted a thorough investigation of the famous merchant’s companies in 2014. The 651-page report, which the Hurriyet claims to have in its possession, reaffirms the details of Zarrab’s “gold export” business. Because Turkey lacks serious gold deposits, Zarrab’s firms imported gold bullions into the country only to export them to Iran as well as third parties such as Russia, United Arab Emirates and China. The scheme enabled Tehran to circumvent US-led international financial sanctions against its nuclear program, allowing it to import key items while exporting oil and natural gas. The Turkish report estimates Zarrab’s gold transactions to be worth $8 billion.

The report also discusses plots worthy of heist movies such as “Ocean’s Eleven” and “The Italian Job.” Apparently, Zarrab’s companies imported, then exported, re-imported and then re-exported the same consignment of gold to cook the books and improve their credit rating. Another “suspicious” dimension of these operations was the fact that Volgam Gida Ltd. — the company that brought Zarrab his “top exporter” prize last month — isn't supposed to handle precious metals or jewelry because it is registered to trade in foodstuffs.

But the most interesting element in the customs ministry report is the claim that inspectors found direct links between Reza Zarrab and Babak Zanjani, a businessman currently held in prison in Iran for corruption and bribery charges. Zanjani allegedly never turned over $2 billion from oil sales he had conducted on behalf of the Iranian state during the sanctions period. Several officials from the administration of former Iranian President Mahmoud Ahmadinejad are under investigation as Zanjani’s accomplices — a story that Al-Monitor’s Iran Pulse section has covered closely.

Zarrab insists he never partnered with Zanjani and had only minimal interaction with him. There is no evidence to suggest otherwise. According to a story in Hurriyet’s English language version, the Iranian government has “no documents showing any ties between Zarrab and Zencani [sic].”

At least for now, the Iranian-born Turk appears to be safe from prosecution in his country of birth as well as his adopted homeland. A Tehran-based Iranian journalist who follows events in Turkey closely spoke to Al-Monitor on condition of anonymity. He pointed out that the Iranian government’s perceptions of the two men are different. Responding to questions over email, the journalist said, “Reza Zarrab has no problems [in Iran].” In fact, he added, “[h]e is seen as something of a hero for helping his country during its time of need.” Zarrab, he said, “comes and goes [to Iran] as he pleases.” As for Zanjani, “it is not known what will become of him.”

Not everyone agrees that Zarrab’s hard times are behind him. One such observer is Tolga Tanis, Hurriyet’s Washington correspondent and one of the first people to write about the Turkey-Iran “gold for gas” axis in spring 2013 — months before the December 2013 corruption probe started. Tanis recently argued in his column that it was “time to say goodbye to the Zarrabs” because Turkey and Iran do not need such shady characters anymore. With US financial sanctions at an end, he says, Ankara and Tehran will “clean up” their financial and commercial relations.

Of course, Tanis admits that Zarrab does not face Zanjani’s predicament. In an email to this journalist, he pointed out that Zarrab “is someone who is protected and given awards by the Turkish government at the moment.” Likewise, whereas the US government slapped Zanjani with major restrictions in April 2013 for his role in busting the sanctions against Iran, Zarrab got away relatively unscathed.

But if the Turkish government does document the links between Zarrab and Zanjani, it could have unforeseen consequences for both men, and for Ankara and Tehran.

Proof of a direct link to Zanjani could mean that Zarrab could never return to Iran. Or worse, Zarrab would be forced to return to Iran to face the music if his guardian angel, Turkish President Recep Tayyip Erdogan, fails to win re-election in 2019.

That would be a worrisome prospect for the Iranian-born Turk. Mahafarid Amir-Khosravi, another businessman accused of embezzlement in another case during the Ahmadinejad years, was executed in May 2014. Iranian lawmakers are clamoring to know what has taken the judiciary so long to reach a verdict on Zanjani.

It appears that forces much greater than Zanjani and Zarrab will ultimately decide their fate. For some time, Turkey has been apprehensive about its diminishing profile and Iran’s improving relations with the West in the aftermath of the nuclear deal. But Ankara neither wants to alienate its traditional allies in the West, especially the United States (which partly explains why Turkey began to engage the Islamic State more directly since last week), nor does it wish to lose the lucrative Iranian market, which will soon open up to international investors. The Turks hope to increase their trade with Iran, which was $13.7 billion in 2014, to $30 billion within the next two years.

At a time when the Iranian parliament and the Hassan Rouhani administration continue to pursue corrupt officials from the Ahmadinejad years, any clear and tangible evidence linking Zanjani to Zarrab could be an incentive for Ankara to curtail the latter’s activities in order to improve its relations with Tehran.

In that case, says Tanis, the image of “Zarrab as hero” could change very quickly. “There is a very thin line between heroism and treason,” he warned.