Is corruption suspect's US arrest bad news for Erdogan?

The US arrest of Reza Zarrab, allegedly a key figure in Turkey’s bribery and corruption scandal, has set off alarm bells in Ankara. 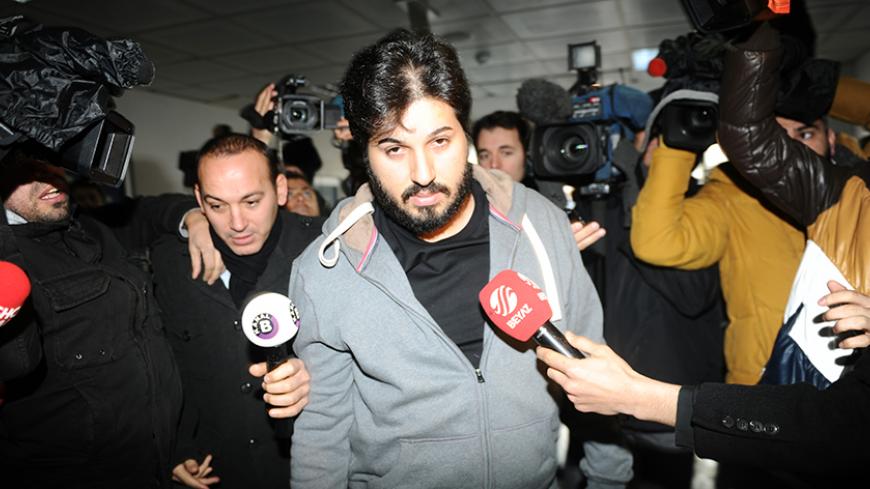 Detained businessman Reza Zarrab (C) is surrounded by journalists as he arrives at a police center in Istanbul, Dec. 17, 2013. - Getty Images/Ozan Kose

The March 19 arrest of Iranian-Turkish gold trader Reza Zarrab in Florida came as a bombshell to Ankara politics. Zarrab allegedly was the key figure running a money-transfer network in 2010-2015 that was designed to evade US sanctions against Iran.

Zarrab allegedly acted on behalf of the Iranian government and Iranian businesses, and there is speculation that he must have made a deal with US authorities.

Zarrab was first detained in Turkey but eventually was released with the government’s help. Many believe that Zarrab had to have known he would be arrested the minute he landed in the United States, and that he wouldn’t have made the trip without a deal worked out in advance. His potential disclosures to the US federal prosecutor will surely implicate Turkish officials and, as such, may well be an instrument of pressure on President Recep Tayyip Erdogan.

Preet Bharara, the US attorney for the Southern District of New York who prepared the indictments against Zarrab, became a sensation overnight as the Turkish opposition's social media favorite. In just a few days, the number of Bharara's Twitter followers exploded to more than 80,000 from fewer than 10,000. By March 23 he had 190,000 followers. Hundreds of the new fans had Turkish names.

One Twitter user even asked Bharara, “You want anything from Turkey? Turkish raki, shish kebab, lokuum, Turkish carpet. Just ask. We are on your service.”

Naturally, the pro-government wing took countermeasures. Some accused the US prosecutor of being part of a conspiracy, while the pro-government daily Sabah declared him to be a member of the “Fethullah Gulen terror organization."

The Turkish government, on the other hand, has been totally mum about the arrest of Zarrab, whom it had honored with an award for his proficiency in gold exports and his contribution to the national economy. Halkbank, a public bank Zarrab was working with, immediately declared it had nothing to do with the case — but its stock lost 8.7% in one day.

Turkey is quite concerned about Zarrab's case being handled by a US district attorney known for tackling tough cases. Turkish officials remember well the infamous Dec. 17-25, 2013, corruption and bribery case, though it has long been shelved. Four Turkish government ministers who were implicated were saved by their immunity. The government helped by reassigning the prosecutors and police who were investigating the scandal.

The investigation had revealed that Iran had come under severe pressure when the money-transfer system SWIFT was barred from working with Iran. Tehran then decided to use a bypass system based on Turkey’s Halkbank. SWIFT was sidelined first by setting up front companies in China. Money was sent to the Chinese bank accounts of these companies from Iran as if they were reimbursements for exports. That money was instantly transferred to front or real companies in Turkey, also as export reimbursements. Gold bought with that money was moved to Iran via Dubai. There was one case in which the manifest of a ship with a 5,000-ton capacity showed it carrying a load of 100,000 tons of wheat.

Turkey was already paying Iran with gold for the oil and natural gas it was buying. To this end, Turkey opened an account for Iran in Halkbank. Iran was converting the deposits in that account to gold. To meet the heavy Iranian demand, Turkey had to import gold: $8 billion worth of gold thus reached Iran. The United States reacted by banning gold exports to Iran in July 2013. That meant a major portion of the $13 billion of gold Turkey had imported remained in Turkey.

The investigation in Turkey was not prompted by the system, but by the bribes paid in the transfers. Zarrab, who assumed the Turkish name of Riza Sarraf after acquiring Turkish citizenship, allegedly was running his operation with the cooperation of some Cabinet ministers and their offspring. According to a local allegation, Zarrab was paying the minister of economy, Zafer Caglayan, a commission — that is, a bribe — of 0.3% to 0.4%. Zarrab is known to have paid Caglayan 103 million Turkish lira (some $35 million) and to have paid Halkbank CEO Suleyman Arslan 16 million lira (about $5.67 million). Many believe that then-Prime Minister Erdogan had to have known what was going on.

The US indictments are more comprehensive. For Zarrab and his two alleged accomplices, the charges carry maximum sentences of five years in prison term for defrauding the United States, 20 years for violating the International Emergency Powers Act — which regulated the sanctions against Iran — 30 years for bank fraud and 20 years for money laundering. The district attorney is also calling for all of Zarrab's assets to be confiscated.

The indictments state that Zarrab set up a network of companies in Turkey and the United Arab Emirates to bypass the sanctions. Iranian Camelia Jamshidy, who was working at Royal Holding, and Hossein Najafzadeh, a senior official of Mellat Exchange, allegedly played key roles in money transfers but remain at large.

According to the indictment, email traffic between Zarrab and the others revealed numerous violations.

Some speculate that when Zarrab heard his Iranian partner Babek Zencani had been sentenced to death for his illegal financial dealings, Zarrab preferred to give himself up to US officials, opting for a short prison term in the United States instead of being executed in Iran.

A question frequently heard now is, who will Zarrab destroy with his revelations? Some people wonder if Zarrab's arrest is more than it seems, that the timing — while Erdogan faces tensions with the United States, the European Union and Russia — might indicate that someone has had enough of Erdogan.

Zarrab has retained the international law firm Baker & McKenzie to represent him.

“Zarrab moved when Zencani was sentenced to death. He was afraid of getting killed in Istanbul after his protector's powers handed him over to [the] mafia. Zarrab felt that his protectors would kill him to cover themselves. He couldn’t go to Europe. Most likely he made contacts with Americans. It is impossible for Zarrab not to know that the FBI would apprehend him the minute he landed in Miami. Clearly there are CIA-FBI intermediaries. If Zarrab spills what he knows, he will get a light sentence and save part of his wealth. If he speaks out, the Dec. 17-25 graft operation in Turkey will become an international case.

Daily Hurriyet Washington correspondent Tolga Tanis is among those who said the case will implicate Turkey. He noted that there were references to Turkey’s Dec. 17-25 investigations in the US indictments.

Former Republican People’s Party (CHP) deputy Aykan Erdemir agrees. “A deal Zarrab can make with the prosecutor to mitigate his own sentence could well lead to detention decisions for new names. Many politicians, bureaucrats and businesspeople may then refrain from visiting the United States to avoid arrests,” he said.

The United States had earlier warned Ankara about Zarrab’s sanctions-evading schemes. David Cohen, who was the Treasury undersecretary in charge of the embargoes on Iran in 2011-2015, made several trips to Ankara before he took over as deputy director of the CIA.