Turkey's creative schemes aim to discredit Zarrab case in US

Turkish President Recep Tayyip Erdogan and his team failed to convince the United States to agree to a “diplomatic solution” in the financial crime case involving Reza Zarrab and Turkey’s top bankers and former ministers. Now, Erdogan claims the case is a conspiracy against Turkey between the United States and the Gulen movement. 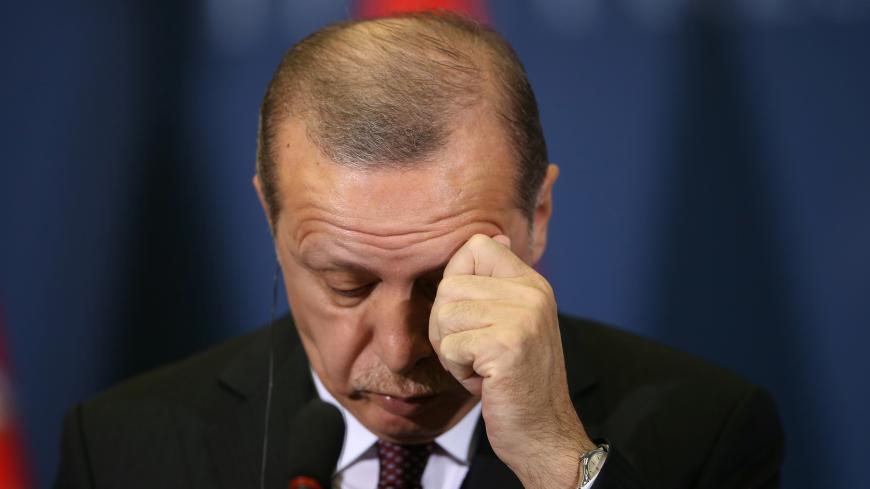 As the world waited to see whether the US trial of Iranian-Turkish gold trader Reza Zarrab would actually get underway today in New York after numerous postponements, speculation was growing that Zarrab might be cooperating with prosecutors. The news surely panicked any senior Turkish officials who fear they could be implicated in accepting bribes to facilitate an alleged money-laundering operation.

Zarrab is accused of laundering hundreds of millions of dollars through US financial institutions in a scheme designed to help Iran evade US economic sanctions in 2010-15. He was arrested in March 2016 while traveling in Florida. Turkish President Recep Tayyip Erdogan has personally asked the US government to release Zarrab, which is raising questions about Erdogan's possible involvement in the scheme.

As jury selection began today, the judge announced that Zarrab would not be going on trial this week, and that the only defendant would be a Turkish bank official.

The Turkish government, supported by an extensive media apparatus, has found a quite intriguing way to manipulate public opinion regarding the case. Turkish officials’ first and foremost worry is to keep themselves a safe distance from any possible revelations. Of course, shielding Erdogan and his family is of paramount concern.

Turkey's government is shifting blame onto the Gulen movement, which Turkey considers a terrorist organization responsible for the attempted July 2016 coup in Turkey. Zarrab’s US trial is being presented in Turkey as a US-Gulen economic and political conspiracy against Ankara. Due to the rally-around-the-flag effect of the botched July 15 coup, the government has shifted any criticism coming its way onto the Gulen movement.

Turks who lost trust in their own justice system have shown a deep interest in the Zarrab case and affection for Preet Bharara, who was the US attorney for the Southern District of New York from 2009 to 2017. In March 2016, the Turkish government started laying the groundwork for today’s offensive against members of the US justice system. For example, soon after Zarrab was arrested, a photo of Bharara surfaced on the internet that had been digitally altered to imply he was associated with the Gulen movement.

This month, the Istanbul prosecutor’s office said it is investigating Bharara and his successor, Acting US Attorney Joon Kim, claiming documents being used as evidence against Zarrab are of unknown origin and violate international law.

Now that Zarrab has most likely made a plea deal and that Mehmet Hakan Atilla, a deputy chief at Turkiye Halkbank, has become the sole defendant, Turkish eyes are glued to the trial. Atilla was arrested in March and his team of lawyers is paid by Halkbank. Zeyno Erkan, an independent journalist following the case, said that at the pretrial session, the judge warned Atilla his interests might conflict with the banks’ and asked whether he understood the possible repercussions of retaining a defense team paid by Halkbank. Atilla said he was fine with the situation.

However, though Atilla understandably would like a speedy and fair trial, the defense lawyers have been delaying the process: In Ankara corridors, it is agreed that the longer the trial takes, the better for Erdogan and his cohorts.

Another possibility is that Atilla might be working out a plea deal with the US government.

Turkey's government uses intricate ways to muddy waters. As noted, three methods are particularly noteworthy: distorting evidence, targeting the personalities or motives of journalists or prosecutors, and presenting the trial as a coup against the Turkish economy directly and against Erdogan indirectly.

Distorting the evidence may be the most effective method to manipulate public opinion. Turkish news provides a rather vague and distracting picture of the trial process. For example, since the Nov. 21 pretrial session, the media has focused on a report claiming Atilla had been sworn in without raising his right hand. This just worsens the situation in Ankara where, regardless of their political affiliation, only a few can understand the reasons for the trial. Most are not able to see why America is involved and how American interests were harmed. Several asked Al-Monitor, “Why does the United States care about corruption in Turkey?”

Ibrahim Kalin, a spokesman for Erdogan's office, told the French press that Turkey had to engage in trade with Iran because of its energy dependency and labeled the case a “political trial” that aims to tarnish Erdogan’s reputation. Kalin said there are no links between Erdogan and Zarrab. Most important, Kalin said, is that the United States is trying to replicate a case allegedly created by Gulenists in Turkey in 2014.

Zarrab had been arrested in Turkey during the “17-25 December corruption probe” in 2014. That case provided significant clues about Turkey's evasion of US sanctions against Iran. However, Zarrab was released promptly and treated as a celebrity for supporting the Turkish economy — until his March 2016 arrest in Florida.

Now, in a Nov. 25 piece, columnist Abdurrahman Dilipak asks in the pro-government Yeni Akit, "Are [Gulenists] trying to accomplish what they failed to do in Turkish courts, now through the US justice system?”

The second method of obfuscation — personally targeting journalists and US prosecutors such as Kim and Bharara — has gone quite deep. Inside Turkey as well, outspoken Erdogan supporter Cem Kucuk said on television, “If you are a patriot, you see that this court is shaped against Erdogan and the Turkish nation.” In the meantime, news broke that wives of the police officials who ran the probe in 2014 were taken into custody Nov. 17.

The 2014 corruption cases in Turkey ended abruptly, with the Gulen movement being blamed for generating fake evidence. So why should Turkish officials worry that Zarrab might be found guilty? As the charges against Zarrab had been dropped in Turkey, shouldn't they also be dropped in the United States? If all the tapes and documents of the Turkish probe were fake, then why does Turkey's government worry about their origins?

For the third method, Turkey hopes to rouse patriotism by painting the trial as an economic attack. The Turkish lira has lost value against the dollar in international markets as foreign investors flee Turkey. This presents an opportunity to blame it all on the West rather than question the effects of nepotism, corruption or cronyism. Zarrab's case has generated fears about possible sanctions against the Turkish banking system, which enjoys foreign cash flows because of high interest rates for investors. Media outlets that favor the ruling Justice and Development Party (AKP) explain the situation as a “US-led economic coup” against Turkey through the Zarrab case.

One senior bureaucrat told Al-Monitor on condition of anonymity, “The case has widened the crack between Erdogan’s inner circle and the top echelons of the AKP. We fear that the state apparatus was bypassed to find a ‘diplomatic solution directly with the United States’ without involving diplomats in this problem. Now that we know for sure Zarrab’s return is not possible, all the state apparatus is expected to rally behind Erdogan. Yet there are serious doubts: Why is Zarrab so important? Not many people can answer this.”

The same senior official also said the Zarrab case is damaging Turkey’s relations with the United States and other countries. He noted, “Our relations with Saudi Arabia are also on the rocks.” The idea that money laundering in Turkey had helped Iran and Hezbollah would anger Saudi Arabia and Israel.

Indeed, that strain might well explain why Erdogan for the first time in his 15 years in national office directly criticized Saudi Arabia. Turkey is paying a high price due to the Zarrab case, and Turks deserve to know the reasons.