A Turkish prosecutor is seeking 15 years for Istanbul US Consulate employee Metin Topuz for alleged links to an outlawed group, but has dropped separate espionage and coup-plotting charges. 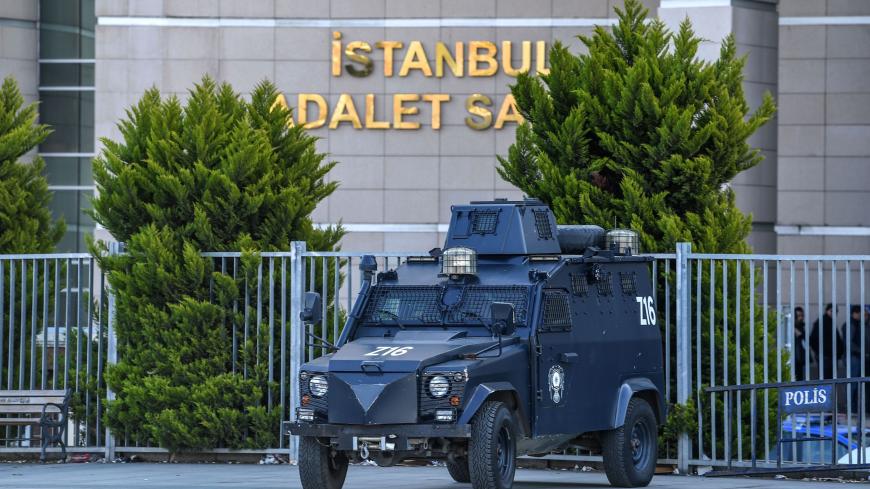 An armored Turkish police vehicle stands outside the courthouse in Istanbul on March 28, 2019, during the trial of Metin Topuz, an US consulate staffer accused of spying and attempting to overthrow the government. - Getty Images

A Turkish prosecutor is seeking up to 15 years for a Turkish employee of the US consulate in Istanbul for his alleged links to Fethullah Gulen, the Pennsylvania-based Sunni preacher who is accused of masterminding the failed 2016 coup.

Metin Topuz, a veteran translator for the US Drug Enforcement Agency, was arrested in October 2017 on charges of membership of the so-called Gulenist Terror Group or FETO, sparking a diplomatic row between the NATO allies and a temporary freeze on visa services for Turkish nationals at US missions in Turkey. Topuz and the US government deny all the accusations.

In today’s hearing, however, the prosecutor dropped separate espionage and coup-plotting charges against Topuz that carry a 35-year sentence, citing insufficient evidence. He denied the defense’s demands that Topuz be released pending trial.

Topuz is accused of “intense contact” with Turkish police officers who led a massive corruption probe in December 2013 against Turkish President Recep Tayyip Erdogan, his family and of his cabinet. He said that interacting with the police force was part of his routine duties.

The evidence against Topuz rests in part on secret witness testimony, which the judiciary typically allows in highly politicized cases.

"It is appalling. Topuz is literally being prosecuted for interacting with the appropriate Turkish officials," noted Howard Eissenstat, an associate professor at St. Lawrence University and senior non-resident fellow at the Project on Middle East Democracy. "It underlines how Turkish prosecutors have continued to pursue political cases."

Erdogan, who was prime minister at the time of the 2013 scandal, successfully painted it as a US-inspired conspiracy to cripple Turkey.

Much of the investigation centered on Iranian Turkish tycoon Reza Zarrab, who with the help of Turkey’s state-run Halkbank ran a multi-billion dollar oil-for-gold trading scheme allowing Iran to dodge US sanctions.

Zarrab boasted during his courtroom trial in New York’s southern district of how he had bribed a former economy minister and made large donations to a charity run by Erdogan’s wife Emine. He struck a plea bargain, becoming the chief witness for the prosecution in its ongoing criminal case against Halkbank.

Erdogan continues to lobby President Donald Trump to get a potential fine on Halkbank dropped. Critics say Ankara views Topuz and two other US mission employees held on similarly specious charges who have now been freed — though not acquitted — as bargaining chips for a deal.

The State Department has not reacted to today’s ruling as of this writing. Nor did the US Embassy in Ankara, a further sign analysts say of how the administration is trying to woo back Turkey just as Ankara’s relationship with Moscow hits major turbulence over the rebel-held province of Idlib in northwest Syria. “It shows the utter fecklessness of the US government in defending its own people,” Eissenstat told Al-Monitor.

But appeasement rarely works with Erdogan. In October 2019, while Washington pressed its Syrian Kurdish allies to make one concession to Ankara after another, Turkish forces mounted a massive offensive against them, overrunning several towns in northeastern Syria as US forces stood back.

“Anyone imagining #Erdogan is interested in "rebooting" US-#Turkey relationship hasn't read cases against #OsmanKavala, which are based on a purported CIA hand in the attempted coup of July 2016,” Eissenstat observed in a tweet.

He was referring to the globally acclaimed Turkish philanthropist who has been in prison since October 2017 on a catalogue of outlandish charges linked to his purported efforts to help overthrow Erdogan. The European Court of Human Rights (ECHR) ruled that he be released over lack of credible evidence. Its verdicts are binding for Turkey.

Last month a Turkish court cleared him of charges related to the 2013 Gezi protests.

But instead of being freed as expected, Kavala was remanded in custody, once again on a further set of coup-plotting charges. Amnesty International condemned the move as “calculated cruelty.”

The ECHR’s ruling on the initial case was set to go into effect today. Under its rules, Kavala would have had to be released because the European court set a two-year limit, among other things, on pre-trial detention. Kavala has been in prison now for 861 days.

But in a further dark twist, Kavala faced a new set of espionage charges on Monday “to justify keeping Kavala locked up,” tweeted Emma Sinclair-Webb, Turkey director for Human Rights Watch. In a statement issued through his lawyers, Kavala bemoaned the charges, which he said had been “fabricated at the last minute." He said, “It is extremely upsetting and worrisome to see that the intention to continue my detention at all costs,” leading “members of the judiciary to violate the laws.”