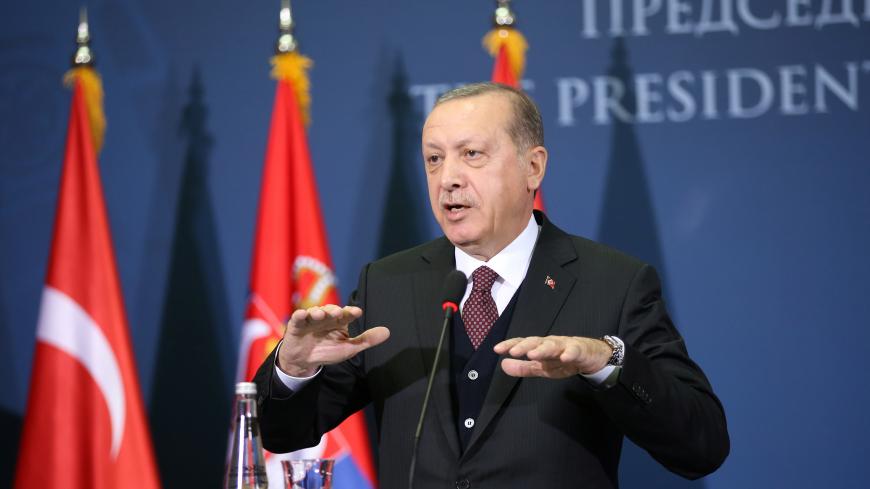 Turkish President Recep Tayyip Erdogan sought to shift the blame for escalating tensions with the United States on outgoing US Ambassador John Bass today. Speaking in Belgrade on the second leg of an Eastern European tour, Erdogan said neither he nor any members of his Cabinet would receive Bass for farewell visits. “We do not consider him as legitimate envoy of the United States,” Erdogan said.

The latest row between the two NATO allies erupted when the United States announced Oct. 8 that it was indefinitely suspending all non-immigrant visa applications for Turkish citizens inside Turkey. Western diplomats commenting on the measure to Al-Monitor called it “drastic” and “unprecedented” and the clearest expression yet of the rapidly unraveling strategic relationship between Turkey and the United States.

The immediate trigger for American action was last week’s arrest of Metin Topuz, a Turkish national employed by the US Consulate in Istanbul for over 30 years. Most of Topuz’ career was spent acting as a liaison and translator for the US Drug Enforcement Administration. Erdogan charged that Turkish national “agents” had infiltrated US missions and that the government was entitled to act against them.

Turkish authorities accuse Topuz of having links to police officers and prosecutors who are facing trial over their connections to Fethullah Gulen, the Pennsylvania-based Turkish imam and accused mastermind of the July 2016 coup attempt. Turkey has retaliated in kind. US citizens will no longer be issued non-immigrant Turkish visas until further notice unless they apply outside the United States.

In a further escalatory twist, Turkish authorities have issued a warrant to interrogate another long-term Turkish employee at the US Consulate in Istanbul who, contrary to reports in the Turkish media, is not sheltering at the consulate. Like Topuz, the wanted man described by fellow employees to Al-Monitor as “a super nice guy” also liaised with Turkish police officers as part of his regular duties. His whereabouts remain unknown. Administration sources who declined to identify the employee confirmed Turkish news reports that his wife and daughter have been detained for questioning.

Topuz is the second Foreign Service National (FSN) as local staff is called, to be arrested by Turkish authorities this year.

On March 7, Hamza Ulucay, another veteran FSN at the US Consulate in Adana, was arrested on charges of membership in a terror organization after being detained for a second time in connection with an ongoing probe against the Kurdistan Workers Party (PKK).

Ulucay's duties included setting up meetings between US Consulate staff and Kurdish politicians, civil society and business leaders in the mainly Kurdish southeastern provinces. Evidence purportedly proving Ulucay's PKK connections included a widely acclaimed book by photographer Susan Meiselas called “Kurdistan In the Shadow of History” and a handful of single dollar notes that were seized at his home. Washington barely uttered a peep.

Administration sources speaking to Al-Monitor on strict condition of anonymity said with Topuz’ arrest “a pattern of targeting consulate staff” had been established and it was time to act. They dismissed Erdogan’s suggestions that Bass may have been solely responsible for the decision to suspend consular services. “The embassy had 100% support from Washington,” one of the sources said, “including from the White House.”

Erdogan’s comments are more wishful thinking: that all that ails Turkish-American relations is being done without consulting President Donald Trump, and that much of the trouble began under the Barack Obama administration. This mantra continues to be repeated by the pro-government press, which cites Washington’s refusal to extradite Gulen as proof of its complicity in the coup.

In fact, US diplomats who met with assorted Turkish officials soon after Topuz was detained gave ample warning of the likely fallout if he were formally arrested. Among those approached were Istanbul’s chief of police, a deputy governor and presidential spokesman Ibrahim Kalin. The US diplomats told them if Topuz were formally arrested that the United States would view it as a political move and an escalation, and that there would be grave consequences for the bilateral relationship, starting with consular services. Until Topuz is freed, chances that the US decision will be reversed are close to nil.

Some analysts agree the suspension of consular services was inevitable, if harsh. “I think the US had to draw a line in the sand over continued targeting of their staff,” said Howard Eissenstat, a Turkey researcher at St. Lawrence University and a senior non-resident fellow at the Project on Middle East Democracy. Eissenstat added that congressional pressure on the administration to sanction Turkey is getting too big to ignore. The Senate recently blocked the sale of weapons to Erdogan’s security detail after their violent attacks against peaceful protesters outside the Turkish ambassador’s residence in Washington, DC.

“As partisan as politics in Washington are, irritation with the directions of Turkish policy seems to be one of the few areas that Republicans and Democrats come together. … I expect more punitive measures, especially if the current crisis is unresolved,” he said.

In a bid to clarify the decision, Bass issued a videotaped statement on Monday. He said the arrest of Topuz “has raised questions whether the goal of some officials is to disrupt the long-standing cooperation between Turkey and the United States.”

Whether intentionally or not, his comments in some ways mirrored those of Erdogan by suggesting that it was certain individuals rather than the Turkish government as a whole who were targeting US mission employees.

Potential culprits may well include the so-called Eurasianists within the army and elsewhere who want to ditch relations with the United States in favor of Russia. Turkey’s nebulous plans to acquire Russian S-400 missiles are believed to be the Eurasianists’ idea. Their spokesman, politician Dogu Perincek, is said to have Erdogan’s ear.

Another explanation is that the arrests of the consular staff were calculated to provoke further tensions with Washington, all part of a long-running strategy to stoke nationalist passions and win votes.

Just as plausibly, Erdogan may believe that if he collects enough US “hostages” he can use them as bargaining chips to force Washington to extradite Gulen. He appeared to confirm such suspicions in a Sept. 22 speech in which he said, “'Give us the pastor back,’ they say. You have one pastor [Gulen] as well. Return him to us. Then we will try [the American] and give him to you.”

Erdogan was referring to Andrew Brunson, the Protestant pastor who has been rotting in a Turkish prison since October on thinly supported charges of links to Gulen.

But the real prize would be Reza Zarrab, the Iranian-American gold trader who was arrested in Miami last year for helping Iran dodge sanctions. Zarrab was at the center of a massive three-pronged corruption probe targeting Erdogan’s government and family that was launched in December 2013. Despite some pretty damning evidence, the case was hastily buried and painted by the pro-government media as yet another global conspiracy against Turkey and Erdogan.

Most of the police officers and prosecutors who led the probe have since been arrested on charges of membership of what the ruling party calls the “Fethullah Gulen Terror Organization.” Others, including high-profile prosecutor Zekeriya Oz, managed to flee the country. The indictment against Topuz accuses him of conspiring with Oz and other "FETO" operatives to build the corruption case against the government and bases the accusation on numerous telephone calls Topuz made to them prior to December 2013.

Hanefi Avci, a former police chief who shot to national fame after writing a book documenting Gulenist infiltration of the force, told Al-Monitor in an interview that it was perfectly normal for Topuz to be in contact with Turkish police officials and other law enforcement officials as part of his work. He said, “Whether they have other undisclosed proof I cannot know, but the links cited are ones that existed long before and how an espionage charge was deduced from these I really can’t understand.”

Besides, Topuz works for the DEA and would not have been involved in any FBI or Department of Justice investigations related to Zarrab. Ahmet Yayla, a former police chief who denies the government's accusation of Gulenist links, believes Topuz had most likely been tapped by the FBI to do some translating, and may have gotten caught in the crosshairs of the Zarrab case and by extension in the black books of the government.

The hearings of the case against Zarrab and Hakan Atilla, the former chief executive of Turkey’s state-run Halkbank who is also implicated in the sanctions-busting scheme are due to resume on Nov. 27 at the Southern District Court of New York. In a hearing on April 24, Southern District Assistant US Attorney Dennis Lockard charged, “Zarrab funneled tens of millions of dollars to high-level government and bank officials” in Iran and in Turkey.

“The government must be panicking,” Yayla, now a lecturer at George Mason University, told Al-Monitor in a telephone interview.

Correction: Oct. 11, 2017. An earlier version of this article said Turkish authorities had issued an arrest warrant for a second person who works at the embassy. It was instead a warrant to interrogate.