US resumes visas for Turks ahead of prime minister’s visit

Turkish Prime Minister Binali Yildirim will meet with US Vice President Mike Pence this week after a series of detentions and differences over Syria have damaged relations between the traditional allies. 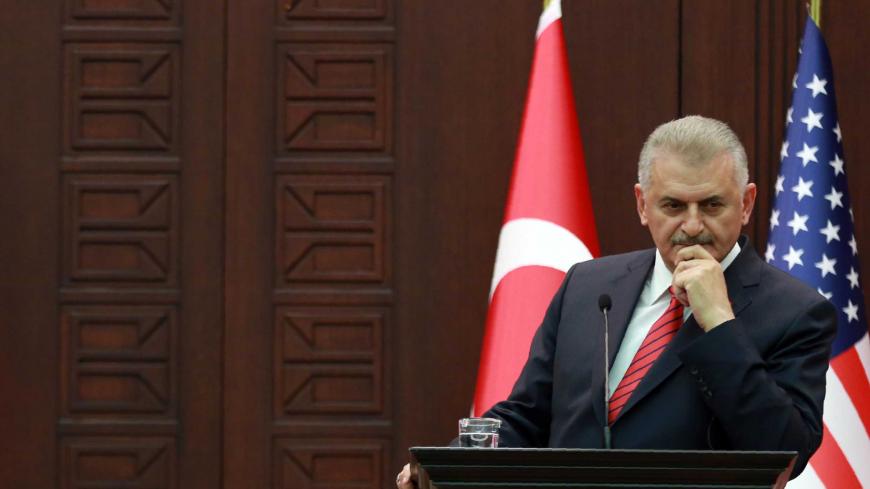 Turkish Prime Minister Binali Yildirim is pictured in front of the US and Turkish flags during a joint press conference with US Vice President Joe Biden at the Cankaya Palace in Ankara, Turkey, Aug. 24, 2016. - ADEM ALTAN/AFP/Getty Images

The US State Department eased visa restrictions on Turkish citizens in an apparent welcoming gift for Turkish Prime Minister Binali Yildirim, who is in Washington this week for talks on a slew of disputes fraying ties between the NATO allies.

Tensions erupted on Oct. 8, when US missions in Turkey suspended non-immigration visas after authorities arrested a long-time employee at the Istanbul consulate in connection with a 2016 coup plot. It's the second time this year a local consular staff member was jailed in Turkey.

The US Embassy said late on Monday that the security situation had “improved sufficiently to allow for the resumption of limited visa services in Turkey” after high-level Turkish officials had assured it that no other local employees were under investigation and no further arrests would be carried out without first informing the US government.

Turkey, which had likewise suspended visas for Americans, also lifted restrictions on Monday, but a subsequent statement differed sharply. “Turkey is a state of law, and our government cannot provide any assurances regarding files that are subjects of ongoing legal processes,” said the Turkish Embassy in Washington.

Still, the reciprocal moves signal a truce in a diplomatic row that has enflamed relations already strained by the United States’ refusal to hand over Turkish citizens sought by Ankara and its policy in Syria, where it backs Kurdish militants fighting the Islamic State who are closely linked with the Kurdistan Workers Party, a group on the US terror list for waging a three-decade insurgency against Turkey that has killed 40,000 people.

President Recep Tayyip Erdogan, who has repeatedly implied that the United States is plotting against him and undermining Turkish security, has not softened his stance in public, lashing out obliquely again over the weekend.

“No legitimate state would put its own soldiers, its personnel alongside terrorists. To us, everyone standing with terrorists are terrorists,” he said in a speech. “These are my final words to those who think they have fooled us by claiming to be allies and strategic partners.”

But Yildirim, who flew to the United States on Tuesday, was said to have Erdogan’s permission for the trip. The prime minister will not see President Donald Trump, who is on a 12-day tour of Asia, but will meet Vice President Mike Pence on Thursday to discuss the situation in Syria and Iraq, newspapers reported.

“The Turkish government wants a working relationship” with the Trump administration, said Aaron Stein, a senior fellow at the Atlantic Council.

“Most people in Washington have Turkey fatigue. They are tired of having to deal with a crisis every single month or day. … Nevertheless, there are a lot of people who believe strongly in keeping the alliance intact and so they work hard to try and manage the relationship. It’s too big to fail,” Stein told Al-Monitor.

During his meeting with Pence, Yildirim will also supply new evidence to bolster Turkey’s demand that the United States extradite Fethullah Gulen, the  76-year-old, ailing Muslim cleric who lives in Pennsylvania and is widely believed to have masterminded the bungled military coup in Turkey in July 2016 that killed more than 300 people.

Pence, an Evangelical Christian, is expected to push for the release of Andrew Brunson, an American pastor detained last year for alleged missionary activities and links to Gulen. Erdogan has previously floated freeing Brunson in a prisoner swap for Gulen, an idea the US State Department rejected.

Erdogan has also lobbied for the release of Reza Zarrab, a Turkish-Iranian gold trader in jail awaiting trial on money-laundering and conspiracy charges to begin Nov. 27 in New York. Erdogan has said the United States is attempting to turn Zarrab on him. Zarrab may have reached a plea agreement or prosecutors have decided to drop the charges against him, US news outlets reported, after his co-defendant, a Turkish state bank executive, filed court documents saying the 34-year-old gold dealer was no longer participating in the case.

Any political interference in the Zarrab or Gulen cases by the Trump administration is seen as unfeasible. Trump is grappling with an investigation by a special prosecutor who is reportedly now looking at whether Trump’s former national security adviser, Michael Flynn, attempted to organize Gulen's rendition for millions of dollars.

“Maybe a swap of Zarrab for Brunson was possible at one point, due to the extraordinarily strange powers of the US president. But this kind of thing is done quietly with deep negotiations. A swap … would be a very difficult legal move for Trump, who is already in a jam,” wrote Cumhuriyet columnist Asli Aydintasbas, adding that the Zarrab case now poses a greater concern for Turkish officials than the long-vilified Gulen.

As for Gulen, Stein squarely blamed Ankara for failing to provide enough conclusive evidence for the US Department of Justice to begin the extradition process.

“At some point the Turkish government will have to look inward and ask itself why, despite providing 85 boxes of evidence, they have been so unsuccessful in moving an independent body of the US government,” he said. “Gulen will die in Pennsylvania.”