Turkey Prime Minister Binali Yildirim met with Vice President Mike Pence on Nov. 9 on a visit to Washington meant to try to ease strained US-Turkish ties, but the obstacles to improved relations are difficult to overcome. 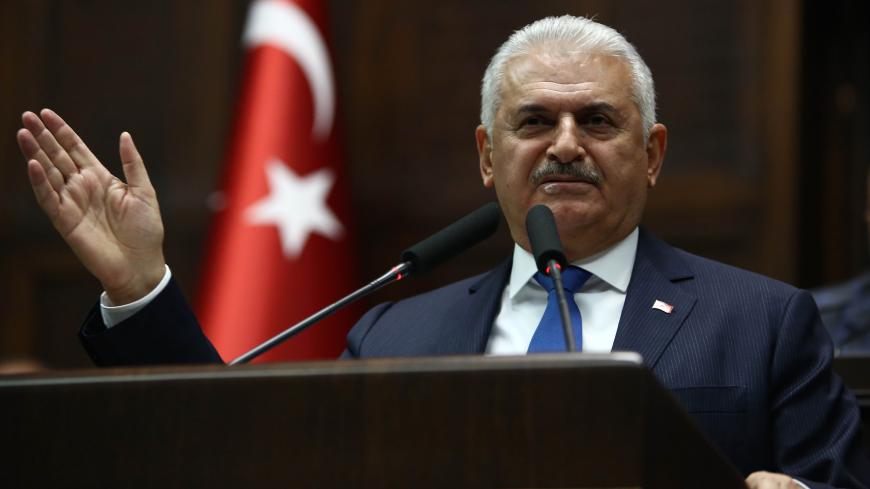 WASHINGTON — Turkish Prime Minister Binali Yildirim met with Vice President Mike Pence at the White House for over an hour today to try to clear the air over a series of issues that have quickly strained relations between Ankara and the Donald Trump administration. Those irritants include: Turkey’s request for the extradition of Pennsylvania-based cleric Fethullah Gulen, whose movement Turkey considers behind the coup attempt of July 15, 2016; the United States working in Syria with predominantly Kurdish fighters whom Turkey considers linked to the Kurdistan Workers Party (PKK); the jailing of dozens of journalists and an American pastor in Turkey; and most recently, visa restrictions between the two countries.

The White House said Pence and Yildirim hoped to “usher in a new chapter” in US-Turkish relations.

“The leaders expressed hope that their meeting would help to usher in a new chapter in US-Turkey relations and agreed on the need for constructive dialogue, as friends and Allies, on bilateral challenges,” the White House said in a readout of the Pence-Yildirim 80-minute meeting.

“They highlighted the United States' and Turkey's mutual interest in stability and security in the Middle East and agreed to further intergovernmental consultations toward that end,” the readout continued. “The Vice President also thanked the Prime Minister for Turkey's contributions to global security and the fight to defeat [the Islamic State], and he underscored the US commitment to stand with Turkey against the PKK and other terrorist threats. The Vice President expressed deep concern over the arrests of American citizens, Mission Turkey local staff, journalists, and members of civil society under the state of emergency and urged transparency and due process in the resolution of their cases."

Yildirim's charm offensive included meetings with journalists, think tankers and lawmakers in Washington on Tuesday and Wednesday, and will continue in New York for meetings with UN Secretary-General Antonio Guterres, Jewish community leaders and investors. However, Yildirim's cordial message urging the working out of problems bumped up against bureaucratic, legal and military obstacles that make resolving some of the deepest irritants in the relationship quite difficult.

“Relations between Turkey and the United States are going through tough times,” Yildirim, speaking through a translator, told some dozen journalists at a roundtable in an elegant meeting room at the Turkish ambassador’s residence in Washington on Wednesday.

Strained ties “are not only about Turkey-US relations, but also about the region in which our country is located,” Yildirim said, noting “the situation is not very bright in Syria, Iraq and probable problems to come. In such a context, the relations between Turkey and the USA might be worsened.”

“Of course, this does not serve our interests,” he said. Turkey and the United States “have deeply rooted historical ties that have been strained from time to time. But common sense prevailed. … With a common stance, we will always be able to work out problems.”

Yildirim said Wednesday that in his meeting with Pence, he hoped “to talk about all these issues with the vice president in an open manner, so we can start a new era.”

Before the Turkish delegation’s arrival this week, conversations between Turkish Foreign Minister Mevlut Cavusoglu and US Secretary of State Rex Tillerson had made way for a small breakthrough in restarting visa applications between the two countries on a limited basis.

“Visa applications have started, and we hope this will be normalized very soon,” Yildirim said.

The Turkish delegation, which also included the Turkish foreign minister, “had a very fruitful meeting” with Senate Foreign Relations Committee Chairman Bob Corker, R-Tenn., Yildirim said. “We have come to realize that certain problems are due to insufficient information. This leads to certain wrong perceptions. We had a chance to talk about these.” The Turkish prime minister proposed more reciprocal parliamentary-congressional exchanges to “improve the information regarding Turkey.” Such increased visits might “then change their prejudiced ideas about Turkey.”

“In summary, what I am trying to say, the worsening of relations between the United States and Turkey is not only a problem for these two countries, but also cause for worsening of the threat in our region,” he said.

Asked about accusations that have appeared in the Turkish media blaming members of US think tanks and even the US government of supporting the July 2016 coup attempt, Yildirim said the Turkish public is suspicious of why the United States continues to harbor exiled cleric Gulen.

“Almost all of the Turkish people are sure that this coup was carried out by Fethullah Gulen,” Yildirim said. “Whether the United States is behind this coup attempt or not … we have identified that Gulen was the mastermind of the coup attempt, we have delivered the request to the United States for extradition or restriction of his activities in this country. But no steps [have been] taken in this regard."

“This leads to that opinion in the Turkish public,” Yildirim said. “Sometimes perceptions become more important than facts.”

The coup attempt of July 15, 2016, “is like 9/11 to us,” he said. “The US administration and US politicians should show more empathy toward us. And we expect more positive steps taken by them.”

Former US Ambassador to Turkey James Jeffrey said he was sympathetic to Turkish frustration with the United States over Gulen. And he praised Turkish efforts to try to reset relations with Washington.

“The Turks are making a major effort, as is the US government, to resolve some of these disputes and to get on a better level, because the truth is, on our basic strategic level, we and the Turks see the region pretty similarly,” Jeffrey, now with the Washington Institute for Near East Policy, told Al-Monitor. “We are both status quo powers, we are both opposed to Iranian, Russian and various terrorist groups overthrowing the international order.”

“Given that, and the relationship, it is a good opportunity to move forward,” Jeffrey said. “That is what the Yildirim visit is focused on.”

“The problem is three sets of issues,” Jeffrey said. They are trying to "resolve these complicated legal … cases," including ones against President Recep Tayyip Erdogan’s bodyguards in Washington; the case of the American pastor detained in Turkey; and the Turkish personnel of the US Embassy who have been arrested. “These things are very complicated because it involves the legal system from both countries,” Jeffrey said. “But they are making some progress. … I think that is moving in a relatively good direction.”

“The second issue is Fethullah Gulen, [which is a] legal issue … but goes much deeper than that,” Jeffrey said. “Turks feel that most people in America do not really think Gulen was behind the plot. And that it was made up of something else. That is very troubling to Turks."

But extradition is very difficult unless there is a clear-cut legal case, Jeffrey said.

“The one issue I think we can make the most progress on is Syria and Iraq,” Jeffrey, who also previously served as US ambassador to Iraq, said. “We cooperated well on [the issue of Iraqi] Kurdistan. Both the United States and Turkey don’t want to see the Kurdistan Regional Government [KRG] squeezed more. At this point that would be violating the constitution. The constitution establishes an autonomous Kurdistan. If the Iraqi government, pushed by the Iranians, wants to take further steps [against the KRG], there would be joint pushback by the United States and Turkey.”

In Syria, the Turks are finding it hard to believe that the United States does not have a clear plan regarding what it intends to do with the Syrian territory that the US-backed Syrian Democratic Forces have taken from the so-called Islamic State, Jeffrey said.

“All we have are the talking points, that the top priority is the fight against [IS],” Jeffrey said. “But the problem is … it is almost impossible to tell the Turks that … we don’t know what we are going to do now. No one can believe that.”