Turkish President Recep Tayyip Erdogan is clamoring for the head of Fethullah Gulen, but Washington says adhering to legal procedures is paramount before Gulen can be extradited to stand trial for masterminding the coup attempt in Turkey. 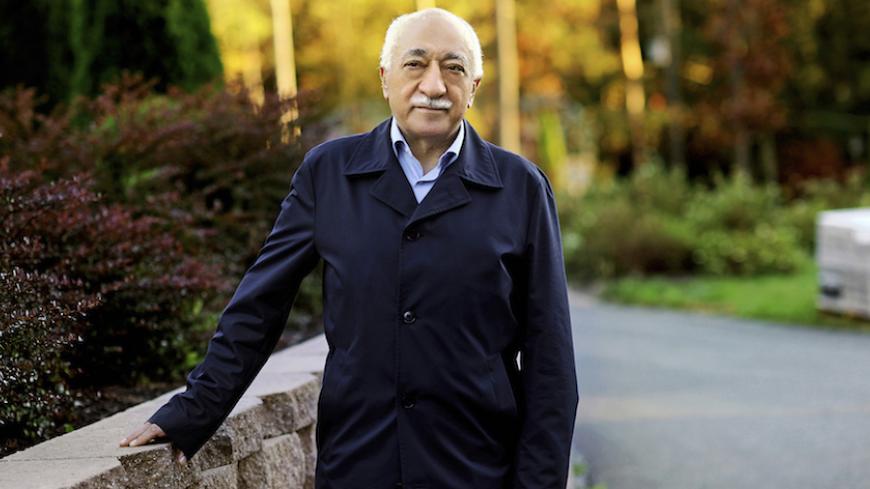 Turkish President Recep Tayyip Erdogan may have averted a military coup, but the domestic and international fallout from the violent attempt to topple him on July 15 is set to continue for quite some time. Turkey’s ties with the United States — already strained over a host of issues, including the state of Turkey’s democracy and Ankara’s discordant positions on regional issues, such as the Syrian crisis — are in line for what might be their most serious stress test to date.

At the core of the problem is the Muslim cleric Fethullah Gulen, Erdogan’s one-time ally and current archenemy, whom Mustafa Akyol and Murat Bilgincan have profiled for Al-Monitor, providing background on Gulen and his war with Erdogan that has now taken an even nastier turn with the blood spilled by rebellious soldiers during the coup attempt that caught everyone by surprise. The coup organizers are accused of being members of the FETO — the so-called Fethullah Terrorist Organization. The group is also referred to as the “parallel structure,” because its sympathizers are said to have infiltrated organs of state and established a “state within the state.”

Gulen’s lawful permanent residency in Pennsylvania has been a thorn in the side of Turkish-US relations for some time, with Ankara demanding his extradition and Washington refusing in the absence of a formal application and of evidence implicating Gulen.

US Secretary of State John Kerry revealed after the coup attempt that Ankara has not lodged such a formal application, despite countless calls by the Turkish government for him to be expelled to Turkey. A Western diplomat in Ankara, who requested anonymity, told Al-Monitor, “Erdogan is behaving like a vengeful sultan by demanding Gulen be sent to him in chains with no regard to international law on extraditions.”

Erdogan — blinded by anger after news that the perpetrators of the coup had sent a team to the resort town of Marmaris, where he had been on holiday, to allegedly kill him — is in no mood to accept legalistic arguments regarding Gulen’s extradition. He and Prime Minister Binali Yildirim repeated calls to Washington after the failed coup, using language that suggested the matter will determine the future of Turkish-US ties.

Addressing supporters in Istanbul July 16, Erdogan railed, “I call on the United States and President Barack Obama: Dear Mr. President, I told you this before, either arrest Fethullah Gulen or return him to Turkey. You didn't listen.” He continued, “Now after this coup attempt I call on you again. Hand over the person in Pennsylvania to Turkey.”

Arguing that Turkey had extradited every terrorist suspect Washington requested, Erdogan said the United States should behave similarly if it considered Turkey a strategic ally. Yildirim was more direct in a July 18 statement, asserting the Gulen issue would be the test of Washington’s friendship. “Any country that stands behind Fethullah Gulen is not our friend,” Yildirim said.

Labor and Social Security Minister Suleyman Soylu went even further, claiming on television, “The United States of America is behind this coup … The psychopath named Fethullah Gulen is being supported by America.” The pro-Erdogan media did its share and floated inflammatory allegations aimed at fanning anti-American sentiment among conservative Turks. Ibrahim Karagul, the editor in chief of the Islamist daily Yeni Safak, claimed that the United States had tried to kill Erdogan in the coup.

Given Washington’s soft response to Egypt after the military toppled that country’s elected Islamist president, Mohammed Morsi, Turkish Islamists believe the United States would happily cooperate with any military regime that toppled Erdogan for the sake of its own interests.

None of this has gone down well in Washington since Obama was among the first leaders to condemn the coup attempt and support Turkey’s elected government. In a phone conversation after the coup attempt, Kerry told his Turkish counterpart, Mevlut Cavusoglu, “Public insinuations or claims about any role by the United States in the failed coup attempt are utterly false and harmful to our bilateral relations.”

John Bass, the US ambassador to Turkey, issued a statement reiterating Washington’s willingness to assist Turkish authorities in any investigation regarding the attempted coup. “If Turkey decides to submit an extradition request for anyone legally resident in the United States, it will be considered under the terms of the US-Turkey extradition agreement,” Bass said. “I underscore that our extradition treaty and US laws have specific requirements that must be met before a suspect individual can be transferred to another nation’s jurisdiction.”

Not everyone in Washington is convinced that Gulen is behind the coup attempt. W. Robert Pearson, a former US ambassador to Ankara (2000-2003), is among the skeptical.

“It sounds convenient for the government to charge Fethullah Gulen with an armed coup attempt when there are so many other reasons why unrest might have erupted within a military charged by Ataturk with preserving democracy and the secular nature of the Republic,” Pearson wrote in Politico Magazine.

Ankara is currently trying to meet the requirements to have Gulen extradited. Any delay in the extradition process due to legal complications will add grist to the mill of those who claim the United States is supporting Gulen. In addition, if Ankara’s application is rejected on legal grounds, it is not hard to predict that ties will suffer a serious blow because of the anger stoked in Turkey by Erdogan and other government officials.

This is a highly messy situation for Washington, given Turkey’s crucial role in the fight against the Islamic State (IS). Tellingly, Incirlik Air Base, which the US-led anti-IS coalition uses, was temporarily closed during the coup attempt, forcing the Pentagon to possibly consider other bases in the region to continue operations against IS before Ankara reopened the facility.

Another statement by Kerry, in which he effectively called on Erdogan to remain within democratic and legal bounds as he goes after suspected coup supporters, also points to fresh tensions ahead between the two countries. Addressing a press conference in Brussels with the European Union’s foreign policy chief, Federica Mogherini, Kerry said, “We will certainly support bringing the perpetrators of the coup to justice but we also caution against a reach that goes well beyond that.”

His remark came after thousands of officials from the military, the judiciary and the bureaucracy began to be rounded up in Turkey as suspected coup supporters. The fear is that it will turn into an undemocratic witch hunt against Erdogan’s opponents, resulting in what amounts to a “civilian coup.”

Kerry’s words angered Ankara, which is still smarting from Obama’s remarks in April openly criticizing the government for curbing press freedoms. “It's no secret that there are some trends within Turkey that I have been troubled with,” Obama had said, shortly after meeting Erdogan in Washington.

The coming days and weeks will be important as Ankara and Washington try to sort out this mess with minimal damage to their “strategic ties.” Tensions over Gulen appear set to linger nevertheless and could undermine relations in an unprecedented manner given the angry and vengeful way Erdogan and his supporters are clamoring for Gulen's head.