Are we headed for Turkish-American breakup?

Former diplomats and analysts warn that Turkish-US ties could be heading for a point of no return. 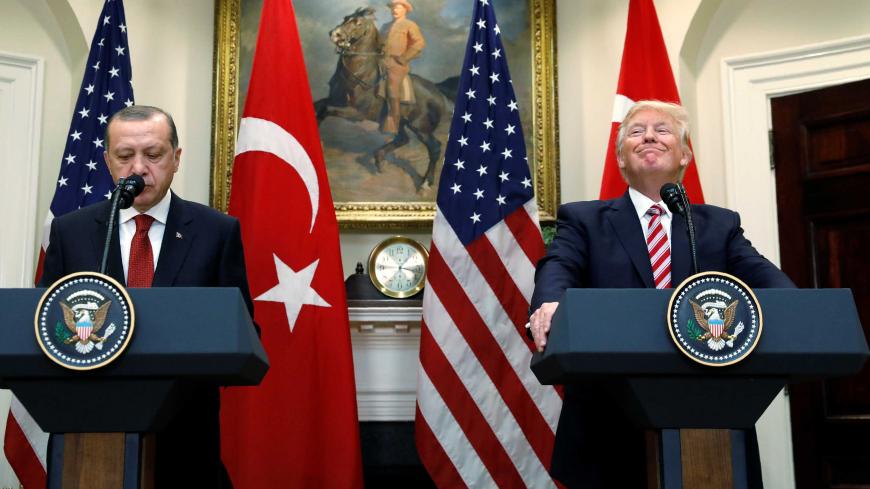 Turkey's President Recep Tayyip Erdogan (L) and US President Donald Trump deliver statements to reporters in the Roosevelt Room of the White House in Washington, May 16, 2017. - REUTERS/Kevin Lamarque

Turkish-US relations have faced many serious stress tests over the past 50 years. The catalyst in overcoming those crises was making strategic considerations, which always underlined the dependence of the two NATO allies on each other, regardless of their differences.

These strategic considerations appear to be weakening now, as the regional priorities of President Recep Tayyip Erdogan’s Turkey and the United States no longer overlap, and in many cases conflict with each other.

That is certainly the case in Syria, where the two countries are at odds over Washington’s alliance with Syrian Kurdish groups against the Islamic State (IS). Ankara insists these groups are linked to the Kurdistan Workers Party (PKK), which has been waging a terrorist war against Turkey for over 30 years to gain independence at best or some degree of autonomy at worst.

The fact that the PKK is also considered a terrorist organization by the United States has not prevented Washington from cooperating with what Turkey says are PKK extensions in Syria, namely the Democratic Union Party (PYD) and its military wing, the People's Protection Units (YPG).

What really turned the tide in Turkish-US relations, however, was the failed coup attempt in July 2016, which Ankara says was masterminded by Fethullah Gulen, the Islamic preacher residing in Pennsylvania.

The refusal by the United States to extradite Gulen on the grounds of insufficient evidence, when linked with Washington’s alliance with the PYD and YPG, has convinced Erdogan and members of his administration that Washington is trying to destabilize Turkey.

Ankara is also angry over what it claims is US support, not just for Gulen, but for other members of what Turkish officials call the Fethullah Gulen Terror Organization (FETO). Supporters of Erdogan and his ruling Justice and Development Party (AKP), as well as many in Erdogan’s clique, have, in short, come to see the United States as an existential threat.

It is not clear, therefore, if the “strategic partnership” between the two countries can survive the latest bitter quarrel triggered by Washington’s decision to suspend non-immigration visas for new visa applications from Turkish citizens.

The background to Washington’s decision has been extensively covered by Al-Monitor’s Turkey Pulse.

The statement by the US ambassador to Ankara, John Bass, indicates that the decision was taken after the arrest of Turkish staff members at the US mission. Some say they were arrested on suspicion of collaborating with FETO, an accusation the American side vehemently denies.

One key barometer of sentiments toward the United States among Erdogan supporters, and no doubt many members of Erdogan’s clique, has been Ibrahim Karagul, the rabidly anti-American editor-in-chief of the daily Yeni Safak, a government mouthpiece.

Karagul believes that these latest developments are the latest link in Washington’s “undeclared war on Turkey.”

Claiming that the coup attempt was orchestrated by the United States, which used the FETO group to this end, Karagul wrote in his column that Washington’s aim was to “take control over President Erdogan in order to pull Turkey back into the US orbit.”

Karagul also accused Bass of being “responsible for all the murders” committed on the night of the coup.

Erdogan’s angry remarks aimed at the United States, and particularly at Bass, have further encouraged those who believe in a US hand in the coup attempt. Erdogan told reporters in Belgrade on Oct. 10, during an official visit to Serbia, that he no longer considered Bass to be the US representative, and tried to shift the blame for this latest crisis on the ambassador’s shoulders.

“If the ambassador took this decision on his own, then the US administration should not keep him here for one more minute,” Erdogan said at his press conference with Serbian President Aleksandar Vucic.

He added that if Washington was behind Bass’ decision, ”then there is nothing to talk about with the US administration.”

Erdogan’s remarks come only a few weeks after his meeting with President Donald Trump on the sidelines of the UN General Assembly. During the meeting, Trump said Erdogan had become a friend of his, adding, “I think now we’re as close as we’ve ever been.”

Erdogan’s attempt at trying to place all the blame on Bass is aimed at Trump, according to a Western diplomat in Ankara. “He is telling Trump if I am your friend, then show it,” the diplomat told Al-Monitor on condition of anonymity.

“This is a dangerous situation because if Trump does not do so, this only makes the situation worse,” he added.

State Department spokesperson Heather Nauert responded to Erdogan’s remarks at her daily press briefing, saying the decision on non-immigration visa applications had been taken jointly by the State Department, the National Security Council and the White House. She also stood by Bass, saying, “He is one of the best ambassadors that we have out there.”

It is not clear where this leaves Erdogan’s remark about “having nothing left to talk about with the US administration” if it was behind the visa decision.

Bass leaves Turkey for his new post in Kabul, Afghanistan, this weekend, and it does not appear that the Trump administration will nominate his replacement anytime soon under these circumstances, thus effectively downgrading its representation in Turkey.

Analysts and former diplomats on both sides agree that this crisis is unprecedented, which has forced many to ask if the “strategic partnership” has a future.

Philip Gordon, a former US assistant secretary of state, believes “the relationship is probably beyond repair.” In an article for the Financial Times, Gordon argued that “the two countries are discovering how fundamentally their core security interests have diverged.”

Hurriyet columnist Sedat Ergin, who served as the paper's Washington representative for many years, is also gloomy about the future of Turkish-US ties. Ergin believes that as long as long as Gulen remains in the United States, he will be a thorn in the side of these relations.

Ergin told Al-Monitor that there is enough evidence to link Gulen to the failed coup. He added, however, that the Turkish government has taken so many legally questionable steps since it introduced emergency rule following the coup attempt that these have eclipsed its arguments on Gulen.

As to whether we are heading for a breakdown in the strategic ties between the two countries, Ergin said this is what has been taking place.

“Ankara and Washington have rarely agreed on any point over these past five, six years. There is also Erdogan’s anti-Western discourse, which shows that he is aiming for a settling of scores with the West,” Ergin said.

“Despite appearances, we do not look like we are part of the same alliance anymore,” he added.

Faruk Logoglu, who was Turkey’s ambassador to Washington from 2001 to 2005, says Washington’s visa decision is “unreasonable and disproportionate” because it targets ordinary citizens. Loguglu told Al-Monitor that Washington’s arguments regarding this decision are not convincing.

He nevertheless believes that this crisis can be overcome, provided politicians rein in their tongues and let diplomats do their jobs. Logoglu also believes that Ankara can’t afford to let this situation go on for long.

“The reasons for our strategic ties with the US continue today. These ties have survived many crises in the past. At the end of the day Turkey and the US still need each other,” Logoglu said.

Given the seemingly intractable problems that exist between Ankara and Washington today, and the increasing bellicosity toward the United States in Turkey, Logoglu’s assessment may be overly optimistic.

The lines have been drawn and neither side appears interested in climbing down. The relationship could be beyond repair, as Gordon says. Neither country will gain from that.