Is Erdogan's blame for ambassador overture to Trump?

As Turkey's President Recep Tayyip Erdogan rains blame on US Ambassador John Bass for the crisis between Ankara and Washington, some analysts wonder if Erdogan's tirades are an attempt to offer the "unique" US administration a way out of its visa move. 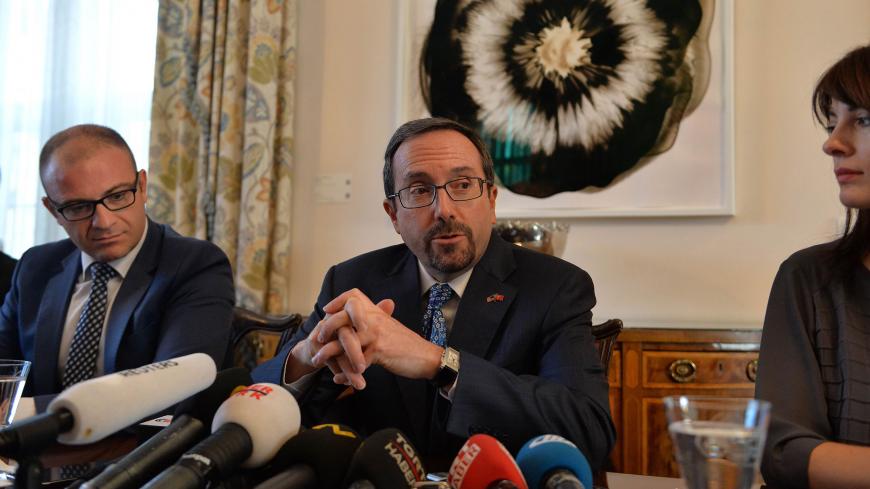 Turkey’s President Recep Tayyip Erdogan unleashed a fresh barrage of salvoes against US Ambassador John Bass today, once again seeking to pin the blame for the ongoing crisis with Washington on its outgoing envoy.

In a fiery rehash of his favorite themes — that global and internal foes are seeking to besiege, weaken and dismember Turkey — Erdogan told a group of provincial governors in Ankara today, “Let me be very clear: The person who caused this is the ambassador here. It is unacceptable for the United States to sacrifice a strategic partner to an ambassador who does not know his place. We are not a tribal state.”

Erdogan was referring to Washington’s decision to indefinitely halt all non-immigrant visa services for Turkish citizens at all US consulates in Turkey. The move followed the Oct. 8 arrest on terror charges of US Consulate employee Metin Topuz, who is a Turkish citizen. Administration officials say Turkish officials were warned at the highest level of the grave consequences that would ensue should Topuz be formally arrested following his detention several days prior.

Sources privy to how the decision was made told Al-Monitor on condition they not be identified that it evolved roughly like this: Jennifer Davis, the US consul general in Istanbul who is extremely well-connected with Washington power circles, led the push for action. “She felt very strongly that her staff needed to be shown that the US was committed to their security,” one said. Bass concurred. Then Fiona Hill, who is deputy assistant to the president and senior director for European and Russian Affairs at the NSC, embraced the idea and brought NSC adviser H.R. McMaster on board.

Hill is known to take a keen interest in Turkey and has written scholarly articles about Turkish-Armenian rapprochement. The Turkish daily Hurriyet also reported that the Harvard-educated Russophile had played a role in the decision.

All of this has left many wondering why Erdogan continues to shift all the blame to Bass.

Nicholas Danforth is a Yale-trained Ottoman historian and a senior fellow at the Bipartisan Policy Center. In an interview with Al-Monitor, he asked, “To what extent does [Erdogan] think he is just offering Trump a way to back down?” Danforth concluded, “At a moment when the Americans are still trying to figure out the relationship between our institutions and Trump’s personal power, Erdogan seems to be making a heavy and high-risk bet on the latter.”

Omer Taspinar, a professor at the National Defense University who has written extensively about Turkey, shared Danforth’s analysis.

Taspinar told Al-Monitor, "The prevailing consensus is that Trump is well-disposed toward Turkey and it’s some bad eggs around him who are bent on wrecking the relationship.”

Taspinar added, “To be sure, there are those in the administration who do worry that when Trump and Erdogan get together they can strike deals that fly in the face of the United States’ interests.” Thus Turkish thinking may not be all that off the mark “because this administration is unique in the way it functions.”

Trump certainly fed such thinking when he told reporters before meeting Erdogan on the sidelines of the United Nations General Assembly meeting, “I think right now we are as close as we’ve ever been. And a lot of that has to do with the personal relationship.” Trump added, “[Erdogan] is getting high marks.” In fact, relations between Turkey and United States have been rotten for a long while.

Washington’s military alliance with the Syrian Kurds, who Turkey says are terrorists, is an open sore. Washington’s refusal to extradite Iranian-Turkish gold trader Reza Zarrab, who has close ties to Erdogan and his political allies, is another. Erdogan apparently fears Zarrab may reveal incriminating information about him at the next hearing, due to be held in New York on Nov. 27.

Some believe Erdogan deliberately ignited the latest crisis with Washington in order to lay the groundwork for spinning any revelations from Zarrab as part of a broader conspiracy against Turkey.

One of his multiple broadsides against Washington today suggested there may be some truth to this theory. “You arrest my citizen and then you try to make a false witness out of him,” he thundered.

Turkey’s other bugbear is Fethullah Gulen, the secretive Pennsylvania-based imam who allegedly masterminded last summer’s abortive coup against Erdogan. The United States says it lacks sufficient evidence to send him back to Turkey.

Topuz, the consulate official who was arrested last week, is accused of membership of the so-called Fethullah Gulen Terror Organization. So is Andrew Brunson, the pastor from Black Mountain, North Carolina, who has been held in a Turkish prison since October 2016. Hamza Ulucay, a Turkish employee at the US Consulate in the southern city of Adana, was arrested in March on trumped-up charges that he is linked to the outlawed Kurdistan Workers Party. Taspinar believes it’s unlikely that the arrests would have been made without Erdogan’s knowledge. “He micromanages everything,” Taspinar said. Many believe the men are being held as bargaining chips to trade for Zarrab and Gulen.

But the visa suspension, which sent a temporary chill through Turkish markets, was a fiercer reaction than Turkey ever reckoned on. There is growing speculation that Ankara may release Topuz on bail to defuse the row. But will that be enough? “What if Trump calls Erdogan and asks him to free Brunson, then what?” asked Taspinar. Erdogan and his lieutenants must be plotting a response.