Turkey's Foreign Ministry issued a formal inquiry about the whereabouts of Reza Zarrab, an Iranian-Turkish businessman held in the United States on money-laundering charges that could implicate Turkey's ruling party. 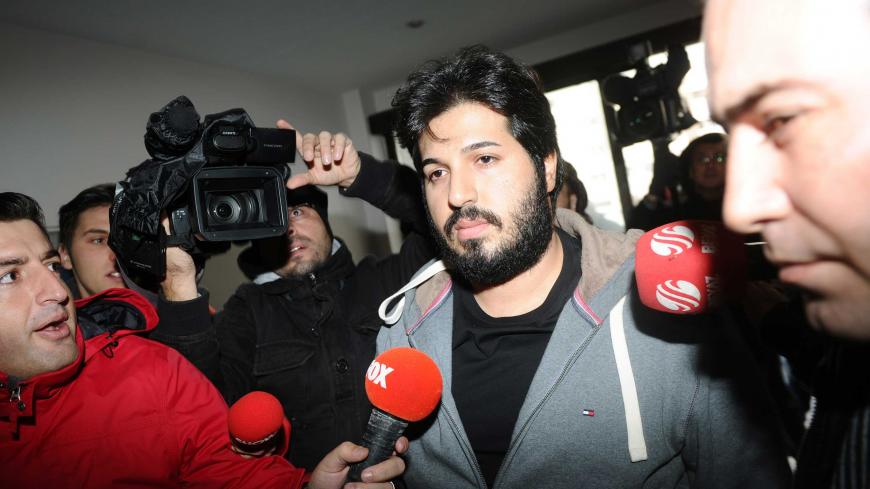 Detained businessman Reza Zarrab (C) is surrounded by journalists as he arrives at a police station in Istanbul, Turkey, Dec. 17, 2013. - OZAN KOSE/AFP/Getty Images

Relations between Turkey and the United States hit another bump this week when Ankara issued a diplomatic note formally requesting information from US officials on the whereabouts of a Turkish gold trader jailed in New York in a case that has roiled ties between the NATO allies.

Reza Zarrab, a Turkish-Iranian facing charges for allegedly violating US sanctions on Iran, is at the center of a political tug of war. Turkish President Recep Tayyip Erdogan accuses the United States of having ulterior motives in bringing the case against the businessman who once fraternized with ministers in his government.

The Foreign Ministry sent the note Wednesday after Zarrab’s lawyer was unable to contact him and the US Federal Bureau of Prisons’ website indicated he had been released from prison. The New York attorney general’s office said Zarrab remains in custody, newspapers reported.

The latest twist comes just as the two countries seemed to be trying to mend a relationship that hit bottom last month when the United States halted non-immigration visa services in Turkey following the arrests of local consular staff members. The State Department partially restarted issuing visas on the eve of a visit to Washington by Prime Minister Binali Yildirim.

But Erdogan was reportedly unhappy with the results of the trip, specifically Yildirim’s failure to clinch any guarantees in the Zarrab case. Yildirim’s remarks that both the United States and Turkey are governed by rule of law also upset Erdogan, because it contradicted the president’s efforts to depict the case as politically motivated, said Yenicag newspaper, citing presidential sources.

“Yildirim came and seemingly got worse than nothing. Pence calling on Turkey regarding not only US citizens and consular staff but also journalists and rights defenders was a big shift for the Trump administration,” Howard Eissenstat, a Turkey researcher at St. Lawrence University and a senior nonresident fellow at the Project on Middle East Democracy, told Al-Monitor.

Until now, President Donald Trump has avoided overtly criticizing Turkey for its checkered human rights record and at a September meeting with the Turkish president extolled their friendship.

What Yildirim could have possibly achieved on Zarrab’s behalf is unclear, now that he is part of US special counsel Robert Mueller’s investigation into whether Trump’s presidential campaign colluded with foreign powers. Mueller is probing Michael Flynn, Trump's former national security adviser who was allegedly offered millions of dollars to effect Zarrab’s release and the extradition of Fethullah Gulen, a Turkish cleric in self-imposed exile in Pennsylvania that the Turkish government says was behind a failed military coup last year.

US news outlets have reported that Zarrab may have switched sides to cooperate with federal prosecutors after lawyers for his co-defendant, a manager at Turkey’s state-run Halkbank, said their client is likely the only defendant who will appear at the trial, slated to begin on Nov. 27.

US officials have responded to Turkey’s diplomatic note with verbal affirmations that Zarrab is in good condition, Deputy Prime Minister Bekir Bozdag told reporters on Thursday.

Turkey is worried that the Zarrab case means “revelations will come out that will personally embarrass President Erdogan and his close associates by highlighting corruption at the highest rings of government,” said Eissenstat, but added he doubted anything that emerges in the trial would come as a surprise to Turks after a 2013 corruption scandal exposed Zarrab’s alleged links with the government.

Turkish officials may be more concerned about penalties against Halkbank and other Turkish lenders for alleged sanctions-busting that could destabilize shaky financial markets, he said.

For its part, Turkey issued an arrest warrant last week for American scholar Henri Barkey, a former State Department official who was born in Turkey, accusing him of playing a central role in orchestrating the attempted coup because he was in Istanbul when it occurred, the pro-government Star newspaper claimed. The daily outlined a litany of misdeeds including that Barkey was a CIA agent and “mastermind” in the plot against Turkey, as the government has stoked suspicions that the United States was involved in the bungled putsch.

“These accusations are so ludicrous that they do not even deserve the term science fiction. Yet the Turkish press, such as it is, and government officials, including the judiciary and security services, seem to be seized with it,” Barkey, a professor of international relations at Lehigh University, told Al-Monitor.

“The Turkish leadership is encouraging this for two purposes: They accuse their domestic critics, imprison them and thus intimidate a larger group into submission and, two, they fan the flames of anti-Americanism at home while trying to succor favor with Washington,” he said.

If Turkey thought it could pressure the US government, it's wrong, Barkey continued. “There is a serious backlash developing in Congress. Turkey used to count many lawmakers as friends on the Hill. They have all but disappeared.”

In addition to two consular workers, Turkey jailed American preacher Andrew Brunson for alleged links to the coup plot and other US citizens, mainly those holding dual citizenship, under a post-coup state of emergency that has imprisoned tens of thousands of people.

Jonathan Cohen, a deputy assistant secretary at the State Department, told Congress on Wednesday that chief among US concerns are “the security of and protection of human rights and fundamental freedoms for U.S. citizens in Turkey and locally employed staff at the U.S. Mission in Turkey, a number of whom have been arrested on dubious terrorism charges under the state of emergency.”

Cohen said, “We will not rest until all of their cases are resolved.”