The sanctions-busting case against Iranian-Turkish businessman Reza Zarrab in the United States has raised the specter of continuing tensions in US-Turkish bilateral ties, with serious implications for the Turkish economy. 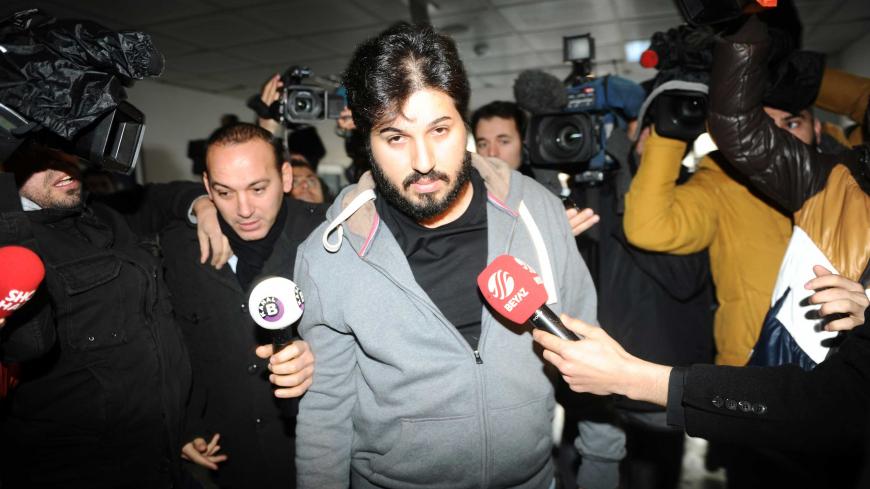 Detained businessman Reza Zarrab (C) is surrounded by journalists as he arrives at a police station in Istanbul, Turkey, Dec. 17, 2013. - OZAN KOSE/AFP/Getty Images

Struggling against global headwinds and domestic woes, the Turkish economy is now suffering additional blows, from political tensions between Ankara and Washington. Following an unprecedented spat that led to the mutual suspension of visa services in October, a court case against Turkish nationals accused of violating US sanctions against Iran has emerged as a new flashpoint in bilateral relations amid reports that the main suspect has invoked the name of Turkish President Recep Tayyip Erdogan ahead of the trial, scheduled to begin Nov. 27.

Last week, the embattled Turkish lira tumbled further over developments in the case, including reports that Reza Zarrab, the Iranian-Turkish businessman who allegedly led the sanctions-evading scheme, might be preparing to plead guilty and cooperate with prosecutors. In September, US prosecutors indicted former Economy Minister Mehmet Zafer Caglayan and executives of the state-owned Halkbank for suspected collusion with Zarrab, upping the political stakes in the case.

The lira’s depreciation is of serious concern to Ankara, as it directly affects the country’s inflation rate, debt repayment and borrowing capacity, and the government’s ability to manage all this ahead of crucial elections in 2019.

What lies at the core of the lira’s depreciation is the Turkish economy’s reliance on external funds — in particular, short-term portfolio investments known as “hot money” — and the unusual increase in the debt to gross domestic product ratio. Sustaining the flow of hot money is of vital importance for the Turkish economy, whose fragile growth pattern suggests that it expands in times of abundant flows of hot money and shrinks when the hot money chooses to go elsewhere.

When short-term investors decide on where to park their funds, they take into account global and regional risks, the level of interest rates in developed and emerging economies, and political conditions. Emerging economies, including Turkey, attracted ample flows of hot money after the last global financial crisis, as the United States and the European Union sought to contain economic woes through liquidity expansion and zero interest rate policies. Since 2015, however, the tide has turned, prompting global funds to change direction. The hot money is going back to developed economies, where central banks are hiking up interest rates and “returning to normal” after expansion. Funds' exiting emerging economies makes the dollar more scarce and thus more expensive, which in turn causes local currencies to lose value against the greenback.

The pace and extent of depreciation has varied among countries, but the Turkish lira stands out as one of the worst hit. This is because of the high country risk, involving domestic economic factors as well as political ones, both domestic and foreign.

The lira’s latest slump began after the US Federal Reserve announced Sept. 20 that it would begin shrinking its balance sheet and continue to hike rates. While the decision had an adverse impact on the currencies of all emerging economies, the depreciation of the lira intensified significantly in early October, with the tit-for-tat suspension of visa services between the United States and Turkey fueled the slump.

The US Embassy in Ankara was the first to make a move, on Oct. 8, amid a simmering row over Turkish prosecutors targeting local employees of US diplomatic missions for alleged links to Gulenist quarters, which Ankara accuses of orchestrating last year’s coup attempt. Since then, the lira has remained under pressure from bilateral tensions, with the focus now moving to the Zarrab case in New York.

The Turkish public has been familiar with the allegations against Zarrab since December 2013, when massive corruption probes rocked the government. Zarrab, an Iranian gold trader with dual Turkish citizenship, was accused of bribing Turkish officials as part of a scheme to transfer gold to Iran to sidestep US sanctions designed to prevent Iran from receiving payments for energy exports to Turkey. A slew of leaked phone recordings suggest that Zarrab received help from ministers, bankers and bureaucrats.

Zarrab was arrested at the time, but walked free after about two months. The charges against him were later dropped, with Ankara shielding Zarrab and other suspects, calling the probes a conspiracy by Gulenist police and prosecutors to discredit the government.

The issue was not, however, closed as far as US officials were concerned. In March 2016, authorities arrested Zarrab when he arrived in Miami for a family holiday. According to the prosecution, Zarrab and his associates conducted hundreds of millions of dollars in transactions on behalf of Tehran and Iranian entities to evade the US sanctions, and officials at Halkbank facilitated the scheme. A year after Zarrab’s arrest, Halkbank’s deputy director, Mehmet Hakan Atilla, also landed behind bars in the United States.

When Zarrab’s trial opens on Nov. 27, the prosecution is expected to present evidence that Halkbank and Turkish government officials were aware of the scheme. According to Bloomberg, an Oct. 30 filing by prosecutors “makes at least three references to evidence that they say suggests that Erdogan or his family members may have known of or supported Zarrab’s activities.” Those include a discussion that supposedly took place between Zarrab and Erdogan at a wedding in April 2013 and instances of Zarrab directing donations to charitable foundations associated with Erdogan’s son and other relatives, Bloomberg reported.

Erdogan’s angry outbursts about the Zarrab case suggest that it is destined to remain at the heart of US-Turkish relations for a long time. Last month, he insisted that both Zarrab and Atilla were innocent and that US authorities wanted “to use [Zarrab] as a confessor.”

If Zarrab does cooperate with prosecutors and provides them information implicating Halkbank, other Turkish banks, bureaucrats and politicians, including Erdogan and his close circle, the case has the potential to trigger massive political and economic earthquakes. Bilateral tensions around the case are likely to continue in the coming days, promising a rough patch for the Turkish lira and the Turkish economy in general.