Turkey’s financial markets have continued to rally despite a string of bloody terrorist attacks, but their festive mood could sour at a stroke. 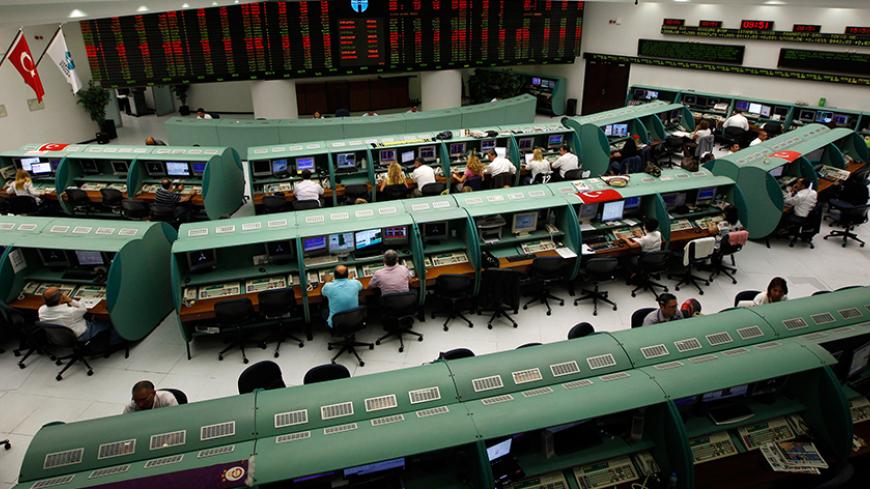 Over the past year, Turkey has been grappling with a rising wave of terrorism and unrest, but its financial markets seem to be little perturbed. As of March 21, the main index of the Istanbul stock exchange, BIST 100, has rallied 20% since Jan. 21, the day it hit its lowest level this year, joining the “bull market” — a term that describes markets in which share prices are rising, encouraging buying.

The index continued to rise — by more than 5% — even after October, when twin suicide bombings struck Ankara, marking the spillover of terrorism to big cities. The Oct. 10 bloodshed was followed by two other bombings in the capital and two in Istanbul, killing a total of 185 people and leaving hundreds of others injured.

In remarks to Al-Monitor, Murat Salar, executive board member at Azimut Securities, said, “The Turkish markets had priced in the risks back in 2015.” The stocks had slumped in the face of “increasing geopolitical risks stemming from Syria, anticipation of the US Federal Reserve hiking interest rates, the devaluation in China and two elections in one year,” Salar said, stressing that the cheaper prices prompted market players to look for a new story to rally on, which eventually came from the United States. “The rally began after it became clear that the Fed’s rate hike would not be as fast as expected,” he added.

Isik Okte, a strategist at TEB Investment, agreed. “Turkish markets have become an investor favorite in 2016. The cheap shares have been propped up by the expansionary policies of central banks in emerging countries. The increase in global liquidity has had a positive impact particularly on bank shares,” he told Al-Monitor.

Okte stressed investor appetite was stimulated further by the economic growth Turkey pulled off despite its difficult circumstances and the slowdown in global growth. In the first three quarters of 2015, the Turkish economy grew an average of 3.4%. The International Monetary Fund forecasts a 3.2% growth for Turkey in 2016, while the government’s target is 4.5%.

Furthermore, the Turkish stock exchange has outperformed other emerging country markets. The MSCI EM Index, based on shares from 23 emerging economies, has increased only 4.4% since the beginning of the year, trailing far behind the Istanbul stock exchange.

A defiant sentiment of optimism prevails also on the bond and foreign exchange markets. The Turkish lira has gained some 2% against the dollar since the beginning of the year, while the yield on the benchmark bond has fallen from more than 11% to about 10% today.

The rally on the Turkish markets is boosted by increasingly enthusiastic foreigners, as evidenced by the strong influx of investment in recent weeks. According to Central Bank figures, foreign investors put $2 billion in Turkish shares and bonds through February to March 11. The inflow in February was the biggest in 15 months.

The most important factor driving market optimism is the expectation that the Fed will move slowly in hiking rates. In December, the Federal Open Market Committee, the Fed branch that determines monetary policy, had signaled four hikes in 2016, but dialed back its projection to two hikes at its March meeting. In further good news for emerging markets, the European Central Bank, battling sluggish growth and inflation, decided March 10 to cut down rates and expand its asset-purchase program by 20 billion euros, further boosting liquidity.

In short, all these external dynamics made the Turkish markets forget the fears of terrorism at home. But how long can this trend go on?

“The foreigners don’t care about the terrorism threat [in Turkey] because the Turkish market constitutes a very small portion in their portfolios. With such a small portion, Turkey’s terrorism risk is easily bought,” Atilla Yesilada of Global Source Partners, a business consultancy, told Al-Monitor. “The cheap Turkish market, boosted by the positive outlook for emerging economies, has performed well, but markets have come to suffer panic attacks. In any new sell-off wave on the global markets, Turkey will again perform worse than others,” he warned.

Yesilada is not alone in his cautiousness. Many other analysts and investment houses warn that another bout of headwinds could be looming.

IS Investment noted that Turkish markets, which were among the worst punished in 2015, had managed to recover quickly, pointing especially to the swift rebound of banking shares, which had fallen behind their emerging economy peers last year. Yet the company downgraded its recommendation from “buy” to “sell” due to what its analysts described as “no improvement in the geopolitical and political risks that had led to the negative alteration of Turkish lira assets earlier.”

The Istanbul stock exchange’s volatility was laid bare on March 22 as the BIST 100 index plunged 1.96% after news broke that Iranian businessman Reza Zarrab, the man at the center of a massive corruption scandal in Turkey, was arrested in the United States on charges of money laundering and banking fraud as part of a scheme to evade US sanctions against Iran. Zarrab, who holds Turkish and Iranian citizenships and resides in Turkey, was briefly arrested in Istanbul in December 2013, along with the then manager of the state-run Halkbank, which, Turkish prosecutors claimed, was used to advance the scheme. The Turkish government, however, quickly blocked the probe in which Cabinet ministers were also implicated. Zarrab’s re-arrest in Miami sent Halkbank shares plunging 8.7% and drove the overall slump of the index.

The Istanbul bourse may remain an investor favorite in the coming months, and the “bulls” of the Bosporus may ignore the growing terrorist threat as long as the winds blow in the right direction. But if the mood begins to deteriorate on global markets, the terrorist threat will emerge as a lead factor pushing investors to flee faster from Turkey.